The latest edition of Canonical’s Ubuntu 12.04 desktop operating system shows considerable maturity. Precise Pangolin is built around the default Unity interface with an optional Heads Up Display (HUD) designed to keep hands on the keys rather than constantly interrupting the work flow by grabbing the mouse. 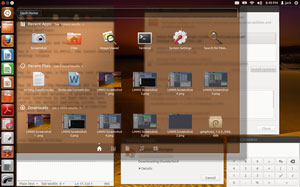 The Unity bar, which debuted last year in the 11.04 release, is still cemented to the left edge of the screen. But it has been tweaked considerably. HUD offers a new approach to avoiding traditional menu and document search functions. Taken together, the Unity/HUD interface brings a new mindset to your computing practices.

Unity, bolstered by the HUD vernier, is more usable and less annoying. But for many seasoned Linux users, the Unity desktop will not easily replace other more popular desktop alternatives.

New adopters of the Linux OS in general and Ubuntu in particular may like the simple, rigid structure of Unity. Power users, however, will no doubt find the continued existence of Unity with HUD bolted on an impediment. The combination is a lot to get used to. This is not your father’s GNOME desktop interface.

Unity May Not Unify

The Unity interface is a far cry better than it was. Maybe I am more used to Unity now and appreciate the tweaking. But the reasons I rejected the Unity interface when it first appeared in a netbook remix two years ago and then as the intended default desktop environment last year still exist.

One annoyance is the unity bar, unmovable from the left edge of the screen, is still bothersome and awkward to use. A second dislike is that the number of icons you can put there depends on how tightly you set the screen resolution. Add too many and the bottom portion flattens until you scroll all the way down the list.

Now it is easier to pull off and move them to a different priority on the bar. You can also lock any open application with a click. But the more icons you add to the Unity bar, the more inconvenient it is to use the collapsing/expanding display. However, a big improvement exists with right-clicking on the Unity bar to display a quick list of preferred apps and recently launched apps.

A Matter of Choice

Two more big annoyances turn off my enthusiasm for the Unity/HUD desktop. I find it much quicker to navigate a more traditional menu than to play a type-and-match app hunt sequence in the HUD structure. Unity and HUD are no real handy replacements for the missing Gnome panel.

The panel of sorts that Unity provides is nothing more than a hard-wired holding zone for some of the system control menus. You cannot add or remove items from this panel across the top of the screen. Nor can you move it to the bottom.

I’m not disputing that the GNOME community failed to make the 3.0 remake last year an improvement for the GNOME desktop environment. But Unity is too limited and too confining, at least for some experienced Linux users.

But let’s not throw the baby out with the bath water. Ubuntu 12.04 succeeds in cleaning up a lot of the mess caused by version 11.10. This latest Ubuntu version has a lot more polish.

Precise Pangolin is much more friendly toward legacy hardware and seems to have a far wider range of acceptance for all sorts of monitors, printers and such. The entire OS is peppier and more responsive. I find it is far less sluggish on my older gear. It flies on my newest hardware.

And the fact that version 12.04 is a Long-term Support release means that individual and enterprise users can count on continuing support for well into the next five years. If nothing else, this long-term support reduces the need to wait for an improved, less buggy replacement release in six months.

Despite any like or dislike for the Unity/HUD interface, Ubuntu 12.04 has a lot to offer. The boot speed does not seem any shorter. But the time it takes to load most applications is certainly quicker.

The downloadable ISO image is a bit more than 700 MB. I did the system upgrade through the Ubuntu package manager on a laptop.

That process took over four hours because there were numerous outdated packages and libraries to remove and a lot more new stuff to add. A better approach if you are upgrading is to do it from the ISO. That will clean out items missed int he package upgrade process.

Several interface elements make this latest version of Ubuntu different from other Linux desktop options. This is a case where user choice will drive acceptance or rejection more than any other aspect of choosing a Linux distro.

The Unity bar itself leaves little or no room for user preferences. The only chance you have for customizing Unity is by bolting on third-party tools such as Gnome Tweak Tool or MyUnity.

The Dash in combination with the HUD replaces traditional menus. Click the top icon on the Unity bar to access it. It includes a search area and a filtering system called a Lens. These help you to fine tune what is displayed, such as file locations, recent applications, files and downloads.

Accessing virtual workspaces has been greatly improved in 12.04. Besides the workspace switcher icon on the Unity bar, you can spread workspaces, switch them or change the main window focus with keyboard combinations of the super key and a letter. You can also navigate around workspaces by holding the control/Alt keys and pressing the arrow keys.

Gaining real control in Precise Pengolin comes with proficient use of keyboard commands. This requires considerable retraining. An exhaustive list of these keyboard shortcuts displays when you hold down the “super” key to see the list.

Simple functions like taping the Alt key opens the search bar. Tapping the super key opens the HUD display. All those actions you previously did with the left and right mouse click buttons are now done with keyboard commands.

Want to keep all the glitz and glitter of 12.04 but avoid the Unity/HUD drawbacks? Want to stay with Ubuntu but remove the need to learn a new interface? Download and install the Cinnamon desktop. Use Cinnamon to replace Unity. You can switch back and forth by logging out and selecting your desktop choice when you log back into Ubuntu.

Cinnamon works flawlessly under this latest Ubuntu version. It offers a more traditional menu system and a functioning panel bar along with a visible workspace switcher right on the panel.

I found Ubuntu 11.10 to be somewhat klunky with the Cinnamon replacement. But Cinnamon works fast and furiously with 12.04. In fact, it works as good as or better than Cinnamon on Linux Mint 12, which paved the way for this newest desktop environment.

Cinnamon is not available in the main Ubuntu repositories. But you can get it here. You can also find complete directions here.

Ubuntu 12.04 is an innovative approach to the Linux OS. It performs extremely well and packs enough power to put it on the leading edge of Linux distros.

The Ubuntu Software Center is greatly tweaked for user convenience. Its new look resembles the best of the features in cellphone and tablet software stores. The Ubuntu One personal cloud syncing service built in can synchronize your files and folders directly through the file manager across multiple platforms and can handle secure scheduled data backups.