Radian6: It’s All About Listening to the Customer

Radian6 Social Marketing Cloud has been released — it’s the first Radian6 product to come to market after the company’s acquisition by Salesforce.com earlier this year. 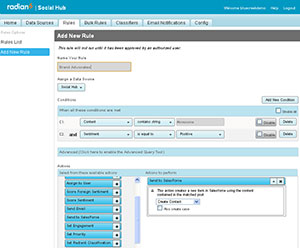 It is also the first product in which Salesforce.com’s functionality has been tightly embedded in the Radian6 feature set, although the two companies worked closely together even before the acquisition, Rob Begg, VP of marketing for Radian6, told CRM Buyer.

For its die-hard user base, though, these changes will be incidental, as Radian6’s mission has remained the same, he noted.

“We are still focused on marketing as a listening-based concept, specific to a particular user,” Begg emphasized. “Our point of reference has always been to work with marketers and their needs, and what we see for them is a definite shift happening. Marketing is moving from unsolicited outreach to customers to a more proactive, conversation-based format.”

In short, companies need to better understand their customers’ needs and wants, he said, and the way to do that is to listen to their conversations.

Radian6 Social Marketing Cloud focuses on this goal with new functionality in its social monitoring, insights, engagement, workflow and website management features. Some of that functionality comes from Salesforce.com, and some of it was in Radian6’s pipeline even before the acquisition was announced.

Among the routine enhancements are the addition of Turkish and Polish to the list of languages it supports, bringing the total to 17.

Others changes have a wider impact — for example, Radian6 Social Insights’ third-party integration with several information providers, including Klout, OpenAmplify and OpenCalais.

Another new addition is a social engagement console that allows companies to engage customers directly where a conversation is taking place — such as on Twitter or Facebook — while incorporating third-party data at the same time. New add-ons let users see trending topics from Twitter and statistics from Bit.ly indicating the reach of shared links.

Perhaps most significant of all the changes, said Begg, is the launch of Social Hub, a feature that helps users organize the huge amounts of social media conversations they collect by applying analytics and rules.

“Social Hub was born out of the feedback we received from customers that were particularly successful at social media,” he noted. “They had learned how to manage the huge volume of conversations by treating those 20,000 — or whatever the number would be — posts a day in a way that was automated and scalable. They would apply business rules to classify those posts in certain categories such as service or support.”

Social Hub can also be used for marketing campaigns, helping a company create landing pages or email messages based on a consumer’s likes.

It is in this area — the quick development of a landing page or website — that the integration with Salesforce.com is most obvious.

In October, the company rolled out a new tool to help customers develop and publish Web pages and landing pages specifically for marketing campaigns. The tool, called “Siteforce,” is built on the Force.com platform.

Salesforce.com Innovation in the Spotlight