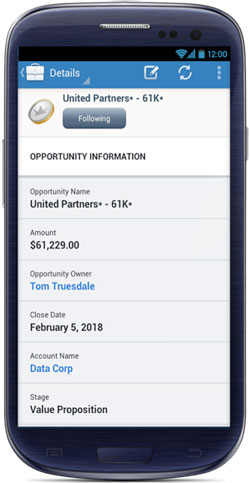 Salesforce.com this week rolled out the latest iteration of its Chatter app designed specifically for the mobile environment. The company launched the first mobile version last year.

Users could post updates or documents, as well as discuss accounts and opportunities, he told CRM Buyer.

“With this version, we are taking all that to a new level,” Peachy said, “allowing users to really drill down into accounts and take many different types of actions while in the field.”

Essentially, the new app focuses on three primary activities that are new to the mobile Chatter user.

“It allows you to access records anywhere, to create and edit information while on the go, and to be able to act immediately right in the Chatter feed,” Peachy said.

For the first time, mobile users can access detailed account records and leads within Chatter and collaborate within context of those objects.

“If I am working on a mobile device, I want to be able to see all the information I can from it — from related records and contact information to opportunities — just as I would on the desktop,” Peachy said.

A new Publisher feature lets users publish such business actions as creating a poll, adding a contact, or sending thanks to a colleague.

Sales reps can get real-time quote approvals, answer service inquiries, or participate in social conversation while at an event.

The greatest advantage comes from being able to connect with customers in new ways, Peachy said.

Design Within Reach, an early adopter, is using Chatter to enable reps to get answers to product-related questions while in the field.

Early adopter Kelly Services is using the mobile version to allow its employees to better participate in internal conversations and collaborations. The same is true for Vodafone Australia.

Virgin America uses Chatter to connect its 2,700 or so employees, about 90 percent of whom are entirely mobile.

“The reason they are using Chatter is to keep their employees connected to the brand,” Peachy said.

Salesforce Chatter is optimized for Android phones and iOS devices. It is generally available now, although the new create and edit record capabilities won’t be incorporated until the second half of 2013.