In an update to its Galaxy Note7 recall, Samsung announced that more than 500,000 new replacement devices would be available for exchange at U.S. retail outlets on Wednesday.

The company also announced the rollout of a software update that will display a green battery icon on the screens of new Note7 devices to distinguish them from those subject to recall.

“Working hand in hand with the CPSC, we are delivering as promised and moving quickly to educate consumers about the recall and make new Note7s available,” said Tim Baxter, president of Samsung Electronics America.

The U.S. Consumer Product Safety Commission late last week issued a recall of 1 million Galaxy Note7 phones. Samsung previously had initiated a global recall effort, following reports that more than 90 phones had overheated — some exploding and some erupting into flames — due to a lithium-ion battery flaw.

Samsung’s brand image took a new round of hits earlier this week. Reports that it rushed the Galaxy Note7 into production were compounded by concerns that the battery fire risk had expanded into the Chinese market.

Samsung rushed the Galaxy Note7 into production in order to get a jump on the relatively tame iPhone 7 that was scheduled to come to market, and its haste may have allowed a flawed battery design to creep into the flagship Galaxy Note7 production cycle, a Bloomberg report suggested.

Top Samsung executives, including D.J. Koh, who runs the Samsung mobile business, signed off on a plan to accelerate production of the Galaxy Note7 in an effort to outmaneuver Apple, according to the report.

At the time, there was a widespread perception that the iPhone Apple planned to launch in September would not excite the market. The Galaxy Note7, introduced in August, sported a number of major new features, including iris-recognition security, a wraparound screen, and — most important in this scenario — a new battery that would charge rapidly.

Samsung reportedly pushed suppliers to speed up the production cycle, which may have led to the design problems that caused some batteries to overheat and combust.

Although it’s possible to review the company’s actions in the run-up to the launch, its motivations may not be as clear as the Bloomberg piece suggests.

“Clearly they did, because the device is having issues,” he told the E-Commerce Times. “Did they do it to beat the iPhone 7? Probably not exclusively. They were trying to capture the high ground on all upscale smartphone devices — not just Apple’s.”

Samsung has pushed back on social media and local press reports suggesting that battery-related fires had occurred in Galaxy Note7s in the critical Chinese market.

As of Wednesday, Samsung reportedly had received reports of three Note7s catching fire, and its investigations of two of them attributed the cause to external sources of heat rather than faulty batteries. The consumer who owned the third Note7 that reportedly caught fire refused to turn it over for inspection.

Despite the reported setbacks, it’s likely that if Samsung upholds its end of the bargain during the recall process, it should be able to repair its customer relationships over time, said Tuong Nguyen, principal research analyst at Gartner.

“The issue seems to be closed out in the sense that consumers are clear on what the next steps are,” he told the E-Commerce Times. “That having been said, it’s really hard to predict consumer sentiment and reaction to anything.” 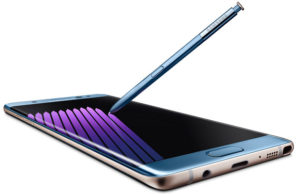