As sales organizations endeavor to escape the constricted economy of the 2009 recession, one of their most significant barriers is stagnant progress regarding bringing their sales cycle under control.

Recent Aberdeen research published for “Inside Sales Enablement: Let Them Drink Coffee!” (Dec. 2009) reveals that not only did under-performing companies see a year-over-year increase in their sales cycle of 12 percent, but even the Best-in-Class, or top 20 percent of performers among over 500 companies surveyed, experienced a slight (1 percent) lengthening of their own lead-to-win timeframe.

As top-performing selling teams continue searching for ways to reduce this window, as well as to increase their win/loss “batting average,” the use of electronic signature capture tools holds potential promise for better sales team performance in 2010. 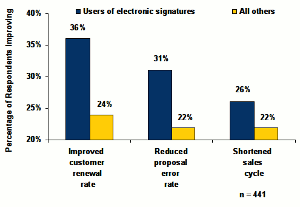 Deconstructing Successful Use of Electronic Signatures

As Figure 1 details, a series of key performance indicators (KPIs) that Aberdeen tracks among survey respondents provides insight into how electronic signature-friendly sales organizations are improving their results. This graph shows that by an average delta of 36 percent, more of these companies showed year-over-year improvement in the following metrics, when compared to all other organizations.

Peter Ostrow is research director of sales effectiveness at the Aberdeen Group.
Get Permission to License or Reproduce this Article

Using Marketing Asset Management to Keep the Brand in Line

The Basic, No-Nonsense, Undisputed Truth About the Customer

Chance Favors the Prepared Mind: The Science of Sales Intel

Clinching the Sales Quota: It’s All in the Prep

Shrink the Cycle, Clinch the Deal, Hit the Numbers

Sales Forecasting: Analytics to the Rescue