StayinFront has been offering users mobile functionality for 10 years. However, its apps were not optimized for the latest generation of mobile devices, Ken Arbadji, vice president of North American sales, is quick to acknowledge — such as the iPhone, iPad and Google Android devices. 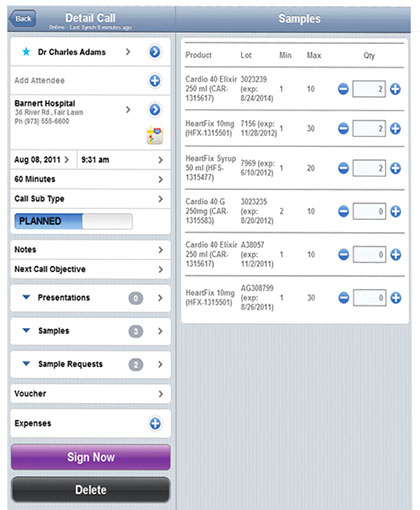 So, earlier this year, the company introduced a new mobile platform for its CRM verticals, StayinFront Touch, and it has been developing applications on it ever since.

“These are industry-specific verticals that have a lot of deep functionality to them,” Arbadji told CRM Buyer. In addition, “the apps have been developed to meet how the devices work — the swipe functionality, the intuitive type of user interface, etc.”

StayinFront built its mobile platform so users can deploy it by navigating to a Web address and downloading the app from there.

“There is no local load issue, in other words,” Arbadji said.

The application can detect what device it is being used — such as an iPhone versus an iPad — and automatically resize screens as it downloads.

This is an important feature for StayinFront’s user base, as most tend to work both in the field and at the home office, where the computing is desktop-based. For some industries, such as pharma, the time split could be as much as 50-50.

“In those cases, the ability to capture information offline and store it seamlessly and securely is critical,” Arbadji said. “We worked hard to button it up.”

Marketing From the Road

The app gives field reps and other users a range of sales and marketing tools to use, said Arbadji, including “the ability to launch presentations with a click or two — or videos, PowerPoint, sales aids. We focused a lot on how these devices serve as selling tools in the field, as opposed to just internal information tools.”

Indeed, that task — selling from the field — has been a key driver in companies’ adoption of the iPad, Arbadji said.

“The client has the benefit of the clarity of a large screen,” he pointed out. “It is also dynamic — the rep can change the message, the data displayed, as needed.”

StayinFront provides support for the systems it hosts, Arbadji said. “We can manage the hardware and manage the assets in the field, and we offer a first-tier help desk.”

The True Nature of Marketing Automation

The Business of Personal Relationships: What SMBs Need to Know Before Investing in CRM