The Huge, Gathering Cloud Over Washington 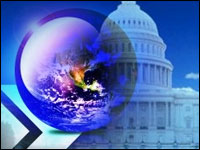 Technology leaders in the White House have promoted greater use of cloud technology at the federal level almost from the start of the Obama presidency. The administration issued its strongest backing yet for cloud technology with last month’s release of the “Federal Cloud Computing Strategy.”

Officials are using the strategy not only to pull together various cloud initiatives into a coherent package, but also as a directive to federal agencies to actively pursue cloud solutions. The strategy raises the bar for federal cloud adoption. Among its objectives:

“Cloud computing has the potential to play a major part in addressing these inefficiencies and improving government service delivery. The cloud computing model can significantly help agencies grappling with the need to provide highly reliable, innovative services quickly despite resource constraints,” notes Kundra.

To accelerate the currently modest pace of federal cloud migration, the strategy directs agencies to intensify their cloud initiatives.

“Following the publication of this strategy, each agency will re-evaluate its technology sourcing strategy to include consideration and application of cloud computing solutions as part of the budget process. Consistent with the Cloud First policy, agencies will modify their IT portfolios to fully take advantage of the benefits of Cloud computing in order to maximize capacity utilization, improve IT flexibility and responsiveness, and minimize cost,” adds Kundra.

Under the “Cloud First” policy, federal information technology managers have been directed to consider cloud solutions as their first option in expanding or upgrading their IT capabilities. Each agency has been required to identify three ‘must move’ services and create a project plan for migrating each of them to cloud solutions and retiring the associated legacy systems. Of the three, at least one of the services must fully migrate to a cloud solution within 12 months, and the remaining two within 18 months.

The existing deficiencies and inefficiencies of federal IT systems are such that nearly 25 percent of the federal resources devoted annually to IT could be more productively deployed to a cloud environment, according to the strategy. With the total annual value of those resources estimated at US$80 billion, about $20 billion could be shifted to cloud-based systems. The agencies with the most cloud potential based on the annual resource redeployment estimate are the Department of Homeland Security at $2.4 billion, Treasury at $2.4 billion, Defense at $2.2 billion, and Veterans Affairs at $2.2 billion.

While that potential is certainly an eye-popping number — and one that may have validity over the long term — the immediate level of federal cloud investment could be significantly less.

“Those estimates involve a broad range of factors including infrastructure, software support, maintenance, and even power requirements. I think it will be a long, long while before it hits that level on an annual basis,” Kevin Plexico, executive vice-president at Input, an IT consultancy, told the E-Commerce Times.

Still, the potential for federal cloud investments will be strong, and will grow at a fast clip over the next five years, Plexico said at the Cloud/GOV 2011 conference held by the Software Information and Industry Association in Washington last month.

In presenting the results of a 2010 Input market analysis, Plexico told attendees at the conference that only 19 percent of federal IT managers said they have a cloud solution in place. Thus the agencies have a long way to go before maximizing cloud potential.

The strategy document also addressed various issues related to cloud implementation at the federal level, including the need to facilitate cloud adoption with improved procurement mechanisms and what agencies need to do in preparing themselves to utilize cloud computing effectively.

“The most important aspect of the strategy document was that it re-emphasizes the Cloud First policy and keeps up a steady drumbeat for cloud adoption,” Dan Burton, senior vice president for global public policy at Salesforce.com, told the E-Commerce Times.

“While there may be some agency reluctance in moving to the cloud regarding technical issues, the strategy emphasized that there are no inherent barriers to the cloud,” he said. “In that sense, the strategy addressed a cultural shift in perception as well as technology issues. It gives permission and encouragement for cloud adoption.”

Getting Feds Comfortable With Cloud Culture