Didi Chuxing on Monday announced a historic deal to acquire the Chinese ride-sharing operations of rival Uber, which threw in the towel after years of unsuccessful efforts to grow its business in what may prove to be the world’s most challenging technology market.

Under the agreement, Didi Chuxing acquired all of Uber China’s assets, including its brand, data and business operations.

The agreement calls for Uber China to maintain independent branding and business operations, while Didi Chuxing will integrate the managerial and technological expertise of the two firms.

The sale was necessary for both companies, said Egil Juliussen, principal analyst for automotive technology at IHS Markit.

“Both companies were losing a lot of money due to discounting to gain market share and building economies of scale,” Juliussen told the E-Commerce Times. “This super-competitive trend will stop, and Didi Chuxing is expected to be profitable soon.”

Uber reportedly lost about US$1 billion in China last year. The sale of its Chinese business will allow it to focus on expansion into other Asian markets, including India and other Southeast Asian countries, Juliussen said.

“In fact, Uber progressed further in China than most other tech companies dream of, ” he told the E-Commerce Times.

“China is an extremely competitive market due to tremendous amount of entrepreneurial activities that are not present in other markets — except the U.S., ” Juliussen said. “Hence, it is nearly impossible to compete with an established Chinese player.”

The timing of Didi Chuxing’s Uber deal is not coincidental. The agreement was announced just days after the Chinese government officially legalized ride-sharing with a new framework. It sets up regulations that will help establish safety, along with competition guidelines that have caused havoc in emerging ride-sharing markets around the world.

The regulations center around a set of standards regarding who can participate in ride-sharing services and how they can operate in major markets, according to a Bloomberg report.

Among the guidelines: Drivers must have at least three years experience behind the wheel; user data must be stored within China for at least two years; and cars must be retired from operations after driving 600,000 kilometers.

Ride-sharing so far has penetrated just 1 percent of the Chinese market, Didi’s Liu recently said in an appearance at Code 2016.

Didi has 87 percent of the private car and 99 percent of the taxi-hailing market in China, the company has claimed. The service completed 1.43 billion rides in China in 2015, and it offers transportation to more than 300 million people in China across 400 cities. 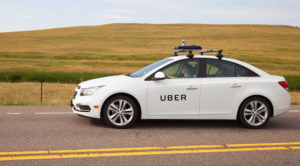 Uber Sees the Cartography on the Wall