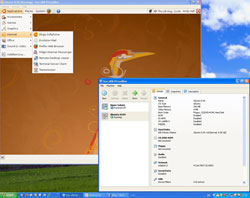 Ubuntu on Windows XP through VirtualBox
(click image to enlarge)

In addition, VirtualBox 3.1offers more powerful snapshotting features that help administratorsmove a virtual machine backward or forward in time to any arbitrarysnapshot state.

“These new features go a long way to making it more useful. Instead ofjust being a desktop toy, they’ve turned it into something that can bea useful deployment,” Bill Weinberg, principal consultant andindependent analyst for Linux Pundit, told LinuxInsider.

Version 3.1 is a very interesting release, according to Weinberg, who expected improvements in performance but found much more built intoVirtualBox this time around.

The teleportation feature, for example, breaks VirtualBox out of itsbeginning efforts and into something that will support cloud computing, hesaid. The features add value higher up the stack.

“From a technical point of view, the teleportation feature createsvirtual machines that have zero downtime during maintenance periods.This is a very big deal,” Scott Testa, a professor of businessadministration at Cabrini College in Philadelphia, told LinuxInsider.

The special attention that Sun Microsystems put into version 3.1 showsthat it was deliberately aiming to capture the enterprise market,noted Testa.

For example, the new version has flexibility for use in amultiplatform work environment. For some businesses, not needing ahomogeneous computing environment to deploy virtual machines is very important, he said.

VirtualBox 3.1 is available for free for personal use as a 50 MBdownload here.

For business deployments within an organization, enterprise licensesor subscriptions start at US$30 per user per year. This includes premium support from Sun’s technical team. Discountsare available based on volume.

Some added features include:

More in Enterprise IT