‘We Know How to Deal With Hard Times’: Q&A With Epicor CEO George Klaus 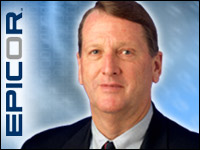 Having joined the business software company in 1996, George Klaus, chairman, president and CEO of Epicor, is hardly a newbie by industry standards. However, he tells CRM Buyer that all of his executive team has been with the company even longer — long enough, in other words, to have weathered several economic downturns, including the tech bubble burst in the early 2000s.

“We’ve been through this before,” Klaus said. “We know how to deal with hard times.”

Fortunately for the company, it is well positioned to ride out this particular economic bad patch, he added. The company has just released a newly architected flagship product, and it’s sitting on US$90 million in cash. In an exclusive interview, Klaus told CRM Buyer how he will leverage those advantages in the coming year.

CRM Buyer: How is Epicor weathering the economic downturn?

Better than most. Even in 2008, we still added approximately 600 new customers, and we brought back approximately 600 customers that had gone off maintenance. … While our stock is under a lot of pressure, the company is still stable from a financial perspective. We generated $56 million in free cash flow last year and 66 cents a share, which is good. [*correction]

In November, we had a right-sizing of 10 percent. That should allow us to be equally or more profitable this year as we were last year on approximately flat revenues. That is our current plan. We have instituted tight cost controls and are watching expenses from travel and entertainment to meetings.

CRM Buyer: How can your products help your customers’ bottom lines in the near term?

Our sales force is trained to sell TCO (total cost of ownership) to our prospect base. TCO means cost of software, cost to implement the software with a consulting organization, cost to be on maintenance — and it also meansthe number of employees that the company has to keep on board to effectively utilize the software internally. More to the point, our product gives clients a better visibility into their business. It allows them to understand customers better and provide cross-group communication.

CRM Buyer: What are some of the brightest spots for your company right now?

We just released our latest and greatest product — Epicor 9 — in mid-December. It was under development for five years. So far, we have had 300 requests for it — 100 of which are from new customers. Also, it was built on the latest [service-oriented] architecture. That puts us at the beginning of a five-to-seven year product cycle.

Well, first tell me how the economy will look. There are a couple of scenarios. We stay course, don’t acquire any companies, and there is no break in the economy. In that scenario, our company will look about same size from a revenue perspective, but a little more profitable. That said, I am a growth guy. So we need to look at how we can generate organic software license growth. But for that we will need a little help from the economy. If the economy turns around even just alittle bit, we will be big victors, because we can beat competitors in nine of out 10 sales pitches. In one case, our team got a standing ovation.

CRM Buyer: You said something about acquisitions. Are you planning one?

I would be interested in companies that are synergistic, accretive, complementary and a good culture fit; companies whose user bases we could migrate onto our latest Epicor product; companies that haven’t developed a future for their customer base in terms of new product offerings; [companies in markets that] would be a good opportunityfor us to move into.

CRM Buyer: How would you pay for such an acquisition?

Cash, unless our stock price doubles in next week or so (laughs). Seriously, we think our stock is significantly undervalued, so to use it to buy something would not be prudent.

CRM Buyer: How much cash do you have on hand for an acquisition?

Ninety million dollars, and we can borrow another $100 million.

CRM Buyer: Tell me about the deal where your sales team got a standing ovation. Did that really happen?

Yes, it did. We were brought into an account that had already made a decision for a competitive product. We were given a short time to prepare for a demonstration [for which] they had already laid out the metrics. We spent the weekend preparing for it. The presentation was so much better than the competitor’s pitch that they applauded us.

*ECT News Network Editor’s Note: The original published version of this article included a parenthetical comment with Klaus’ response: “We generated $56 million in free cash flow last year, and [our stock averaged] 66 cents a share, which is good.” The inserted comment incorrectly implied that Epicor’s stock price averaged $0.66 a share. In fact, Epicor earned $0.66 per share on a non-GAAP basis in 2008. We regret the error.
Get Permission to License or Reproduce this Article