In his new book, “The Cult of the Amateur,” Andrew Keen publicly and pugnaciously says many of the things people were quietly thinking about Web 2.0. He refers to bloggers as a “pajama army” wreaking cultural havoc from their parents’ basements.

Let me provide a few highlights:

“(Web 2.0) democratization, despite its lofty idealization, is undermining truth, souring civic discourse, and belittling expertise, experience and talent … it is threatening the very future of our cultural institutions.”

“The Web 2.0 revolution has peddled the promise of bringing more truth to more people — more depth of information, more global perspective, more unbiased opinion from dispassionate observers. But this is all a smokescreen. What the Web 2.0 revolution is really delivering is superficial observations of the world around us rather than deep analysis, shrill opinion rather than considered judgment.”

“… millions and millions of exuberant monkeys — many with no more talent in the creative arts than our primate cousins — are creating an endless digital forest of mediocrity.”

“Blogs have become so dizzyingly infinite that they’ve undermined our sense of what is true and what is false, what is real and what is imaginary. These days, kids can’t tell the difference between credible news by objective professional journalists and what they read on joeshmoe.blogspot.com.”

“Amateur hour has arrived, and the audience is now running the show.”

By penning his polemical book, Keen has brought to the forefront an inevitable debate over the quality of user-generated content and the long term societal impact of Web 2.0 technologies. Never one to shy away from a good argument, let me share my own observations.

The term “citizen journalist” conjures the image of an unsung, Edward R. Murrow type waging a lonely crusade against society’s corrupted powers holders. Hard working family man by day, by night he pounds the keys of his computer in order to hold the entrenched media moguls of the world accountable. 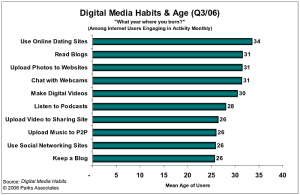 The truth of the matter is rather different. Bloggers are, by and large, a sub-set of social networkers. Sixty-three percent are between the ages of 13 and 24, and the average age is just 26, making them one of the youngest segments on the Internet.

Yes, that’s correct. It’s not a legion of Edward R. Murrows taking on Dan Rather and CBS but rather a phalanx of college kids and their recently graduated peers.

If you don’t believe there are lies on the Internet, try Google searching the term, “George Bush is an alien.”

If after reading through all the returned hits you still don’t think there are lies on the Internet, please seek immediate psychiatric help.

A consequence of letting anyone and everyone publish on the Internet is that, by definition, the screening process is rather scant. Some people will take the time to check their references, others not so much. As a result you can find lots of honest errors as well as plenty of not-so-honest errors. 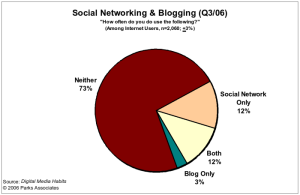 Of course, this isn’t all that different from other forms of media. If The New York Times can get its facts muddled sometimes, you can rest assured someone anonymously blogging as BigKahuna55 will leave some eyes undotted and some tees uncrossed.

Ah, but you may point out that a much larger portion of user-generated content is inaccurate. The venerable Times gets it right 99 percent of the time, while BigKahuna55 is batting .100 at best. However, that isn’t exactly a fair comparison. BigKahuna55 will probably hold his own against The National Enquirer while notable bloggers like Dan Gillmor will give any mainstream print journalist a run for their money on accuracy.

You Can Find Good Content (If You Want It)

Like a magical cauldron, Web 2.0 is supposed to let us boil all of the world’s content, bringing the best to the top. It does, although the process is messier and more technical than it sounds.

Rankings and organization are based on direct user input (through tagging and rating) or indirect input (i.e. analysis of usage patterns). However, these tools are still in their infancy and are constantly being refined. As they are improved upon, they will become more effective at sorting content and separating the good from the bad.

This is not to say that good content will ultimately supplant all bad content through a Darwinian online struggle. It is already possible to distinguish accurate, well-written online journalism from rubbish. All you need to do is pretend you’re a college professor for 10 minutes and check a few references. It’s actually quite easy to do (again, thanks to Google).