When Boot Bugaboos Strike, These Apps Will Be Your Heroes

The Linux operating system is a great computing platform when it works. But sooner or later, your computer will fail to boot. When this happens, Super GRUB2 Disk and Rescatux Disk can be powerful allies in jumpstarting your computer.

Of course, a failed boot happens in any OS. Your chances increase, however, when your hard drive is partitioned to hold multiple OSes. When you combine a Linux distro and Microsoft Windows on the same hard drive, your chances for a mangled partition and destroyed dual-boot option are much greater.

Both Super GRUB2 and Rescatux are an equivalent emergency fix that can get you to your desktop and access your critical files. Think of it like jumpstarting a car by hooking up a set of cables between your car’s battery and another’s. Remember those good old days when you could have some friends help you push-start your car? Once you got moving fast enough, you popped the clutch — or rammed the auto transmission into low — to get the engine going. Those procedures are roughly akin to what you do when you use Super GRUB2 or Rescatux to start your computer.

I like to tinker with computer hardware and Linux software. Testing open source apps almost daily and converting Windows slowpokes into Linux speed demons gives me lots of opportunity to screw things up. I recently violated my No. 1 rule for test bench protocols: That is, never ever do stuff late at night. That is when both of these emergency fix-it apps came to my rescue.

Sometimes computer users are their own worst enemies. We do stuff that in hindsight forces us to admit, “What was I thinking?”

My Late Night No-Touch Rule is based in solid logic. When it is late and you are tired, you tend to take shortcuts without thinking. Given the same set of circumstances in the morning, you would never do it that way.

I had previously installed a release candidate for a pending Ubuntu Linux OS release for version 11.10, which automatically created a new partition on the hard drive to hold the new OS installation. Sometimes RC releases let you roll into the standard upgrade. Sometimes they don’t. This time it didn’t. And the official Ubuntu 11.10 ISO balked at installing over the RC edition.

Rather than waste the hard drive space — and look for a quick solution — I did a dumb thing. I used a file manager app in a Linux distro on another partition to delete the RC files. When the new OS still refused to install due to hard drive issues, I did something even more stupid. I used a disk partitioning app to delete that volume from the hard drive.

Remember, I said it was late at night. Now the computer would not boot at all. It issued a fatal Boot Grub error in an ominous flashing command prompt. That is when I pulled the plug and went to bed. I resolved myself to wiping the entire hard drive, reformatting it, and starting from scratch in the morning.

That is when Super GRUB2 Disk came to my rescue. Well, it partly solved the problem. GRUB, by the way, stands for Grand Unified Bootloader (GRUB). Without a functioning GRUB, you can forget about starting your computer. It does not matter that the installed OSes and your data files remain largely intact on the hard drive.

I was able to boot the ailing computer with the Super GRUB 2 disk in the optical drive. The dual boot screen displayed. That gave me full access to to everything on my computer.

The only problem was an inability to start the computer without the emergency boot disk in the optical drive. The open source community redesigned the original GRUB architecture to make it play nicer with modern computer hardware. My older copy of Super GRUB disk failed to work.

Usually, however, once you get as far as I did, you can then reinstall GRUB by running:

I still do not know why, but that issued error messages that made no sense to me.

I could live with using Super GRUB 2 disk to jumpstart my computer if I had no other options. Wiping the hard drive was now a less favorable choice. I had one more trick up my sleeve — Rescatux.

To get your emergency rescue started with either of these apps, you need to download them. Both Super GRUB2 Disk and Rescatux require you to burn the downloaded ISO file to a blank CD or DVD. This creates a bootable emergency startup disk.

What Super GRUB2 Disk could not accomplish, Rescatux was able to achieve. It succeeded in fixing the broken GRUB process and creating (or retrieving) the failed deleted partition. Once I could boot unaided, it was clear sailing installing Ubuntu 11.10 where I wanted it to go. 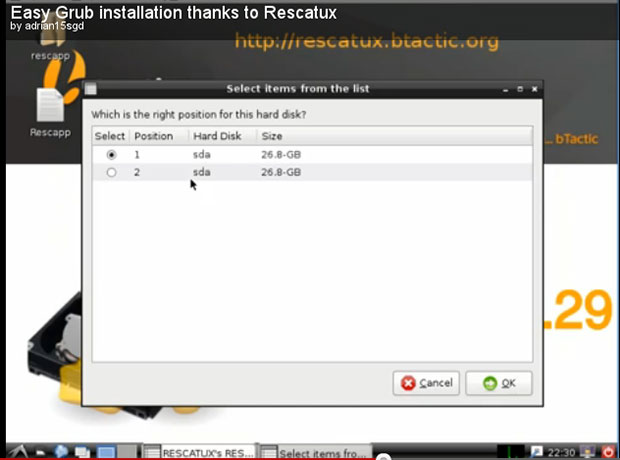 Rescatux is a made-up name. It probably is derived from REScue A TUX machine. Remember that Tux is the Linux community’s lovable mascot. Rescatux is a GNU/Linux rescue CD that is unlike other rescue disk apps. Why? It includes Rescapp, which is a wizard that guides you through various rescue tasks.

Among other chores, Rescatux fixes GRUB and GRUB2 and rebuilds Debian/Ubuntu GRUB menus. It also checks and fixes file systems. If you share hard drive space with a Windows partition, it will even fix the Windows MBR and blank the Windows password.

Super GRUB 2 Disk tries to repair or bypasss damaged boot sectors. It manipulates the GRUB file and also works with the content of other master boot record.

It displays menu options in what resembles a terminal window that fills the entire screen. The black display with white lettering resembles my early days of using DOS (Disc Operating System) before Windows became popular.

A good starting point is to select the option to Detect any OS. This search all partitions on all drives for operating systems. It then creates a menu to choose among the OSs it finds. It supports GNU/Linux, FreeBSD, Mac OSX/Darwin, and all versions of Microsoft Windows.

Other menu options let you detect any GRUB2 configuration file or installation, loop bootable ISOs and list devices or partitions. Other options let you enable serial terminal as well as LUM, RAID, USB and PATA support.

The user interface for Rescatux is much more appealing. This emergency repair app is actually a live Linux distro CD environment. You can select options that include Live, Live (Safe Mode), Live (AMD) and Live (AMD Safe Mode). You can also use this app to run a system memory test.

Once the desktop appears, you can choose from a list of Grub options. The choices include:

You can also update the grub configuration. These options include:

Super GRUB 2 Disk and Rescatux are strong and reliable emergency boot solutions. Super GRUB2’s stark interface makes it intimidating to use. Rescatux is far more user friendly. Both are developed by the same source.

Super GRUB2 Disk is a bit limited in its fix-and-go capabilities. If all you need is to bypass the problem and boot your failed system, it usually does the job. If you need a bona fide repair solution, use Rescatux.