Tesla was on the verge of bankruptcy, and Musk had all but signed the documents that would have handed over the company, according to an excerpt from the upcoming Elon Musk: Tesla, SpaceX, and the Quest for the Fantastic Future. The book will be available May 19.

In March 2013, Tesla Motors was all but running on empty, the book suggests.

Electric vehicles weren’t attracting buyers. Seeing that the end was near, Musk opted for the only viable solution — namely, to cash out. He reportedly contacted his friend, Google CEO Larry Page, and offered to sell. The exact terms remain undisclosed, but Tesla was worth around US$6 billion at the time, according to the Bloomberg article, and factory expansions might have cost another $5 billion.

The talks moved forward and lawyers began hammering out the details, but the deal never closed. At the 11th hour, Tesla’s fortunes turned around — the fledgling auto company even posted a profit.

Google and Tesla both declined to comment for this story.

It is now surprising to learn how close Tesla Motors was to joining the ranks of Studebaker, Packard, Duesenberg, and other failed U.S. car makers. However, if Tesla had been sold to Google, Musk would have remained in the driver’s seat, and he would have continued to run the company for eight years, or until it produced a third-generation electric car aimed at the mainstream market.

At the same time that Musk and Page — and likely a legion of lawyers — were negotiating the specific terms of the deal, which reportedly included a few complicated sticking points, Tesla Motors began selling cars. The Model S saw such strong sales, with thousands hitting the road, that the company posted an $11 million quarterly profit on $562 million in revenue.

That turn of events triggered a jump in Tesla’s stock price — it doubled. Tesla was able to pay off its $465 million loan to the U.S. Department of Energy, and Musk broke off negotiations with Google.

It made sense that Musk turned to Google when Tesla almost stalled out.

“Google has been looking at getting into the car business for some time, and Tesla basically borrowed the Apple model and moved it to cars,” said Rob Enderle, principal analyst at the Enderle Group.

“Since Google partially copied the Apple model as well, and clearly has the funding, they would have been a natural fit for Tesla,” he told the E-Commerce Times.

“The problem is that Google doesn’t seem to have a great attention span, and they tend to starve their efforts, which would have likely killed Tesla over time,” added Enderle. “Musk undoubtedly looked at their history and cared too much about his car company to let Google kill it.”

The fact that the acquisition wasn’t completed could be seen as a missed opportunity for both companies.

“Google picking up Tesla in 2013 would have been ideal,” said Vishwas Shankar, Frost & Sullivan’s automotive and transportation program manager.

“Both Google and Tesla have been disruptors in the IT and auto world respectively since their inception,” he told the E-Commerce Times.

“Google was clearly in an acquisition mood this decade. After Google acquired Motorola Mobility for $12.5 billion in Aug. 15, 2011, the next stop for the IT major was the automotive industry,” Shankar noted.

“Google being cash rich and hungry for more — in order to become one of the most valued companies in this decade — saw Tesla as a clear favorite.” he added.

The fact that the details couldn’t be locked down likely proved to be a blessing for Musk — at least in the short term — as sales picked up and the company rolled forward.

“When Musk allegedly was pitching Tesla to Google, he was struggling to get sales and production of Model S moving,” explained Drew Winter, editor-in-chief at Wards Auto.

“Then, suddenly, the car started getting rave reviews from the enthusiast media, production got unsnarled, and sales took off,” he told the E-Commerce Times. “At that point, he thought he no longer needed to be rescued. This success, along with Musk’s skillful bluster, fueled unrealistic expectations and soaring stock prices.”

Tesla still could face some obstacles, and it likely will face competition from the auto giants, as well as tech companies such as Google.

“The stock now is trending downward from its peak, as the market once again is realizing that Tesla is a tiny automaker that makes only one car and is struggling to introduce three more models in the next several years — starting with the Model X, which is two years behind schedule,” Winter pointed out.

“Investors also are starting to realize Tesla is promising to make huge profits in a sector that so far is unprofitable. There currently are 13 electric vehicles offered in the U.S., and none of them are profitable,” he noted.

“Meanwhile, competition is coming from all sides from automakers like Audi, BMW, Mercedes, General Motors, and others that are more interested in earning carbon credits than making money,” Winter suggested. “This spells trouble for Tesla’s long-term future.”

The other threat may be from Google, which is hard at work on its own autonomous vehicle technology. Yet Google is involved in many projects, so the short-term threat may not be so great.

“Not buying Tesla won’t stop Google — and like they did with Apple, I’d expect then to eventually enter the market now as a much better-funded competitor to Tesla,” said Enderle.

“Given how they did competing with Facebook with Google+, I expect that isn’t keeping Elon Musk up at night,” Enderle added. “So Tesla is better under Musk, at least for now, though this move will likely result in another electric/hybrid car company funded by Google at some future point that will even be more technologically aggressive than Tesla is.” 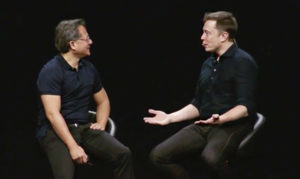