With Colin Powell, Salesforce Board Goes to 11 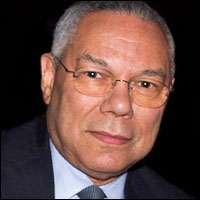 Gen. Colin Powell (Ret.) on Thursday joined Salesforce.com’s board of directors, bringing the number seated at the table to 11.

The general, who has been friends with Salesforce CEO Marc Benioff for several years, has been associated with the company’s philanthropic activities which revolve around Salesforce.com’s famous pledge to give 1 percent of equity, 1 percent of profit and 1 percent of its employees’ time to charitable causes every year.

“This is just the natural development of an existing relationship between Gen. Powell and CEO Marc Benioff,” said David Hartman, visiting assistant professor of management at Quinnipiac University.

“Benioff has publicly indicated that Gen. Powell was a source of personal inspiration to him for the past 15 years,” he told CRM Buyer. “As Salesforce has continued to grow and develop its public sector business, the more direct involvement of Gen. Powell can help both from an external business contact point of view as well as an internal leadership development aspect.”

The news represents a major public and investment relations score for Salesforce. Even though long retired from public life, Powell is a highly respected and popular figure who has bipartisan political appeal. His presence will help Salesforce with its general customers as well as with analysts in the investment community who keep track of such things as board membership and good corporate governance.

In short, Powell brings star power to the board, David Johnson, CEO of Strategic Vision, told CRM Buyer. “He is someone that the general public is acquainted with and in many ways admires.”

His prestige will rub off on Salesforce.com to a certain extent, Johnson added. “It gets people and investors looking at the company anew. If the company is looking for capital, this type of announcement helps that effort. It gets policymakers also checking the company out.”

What Powell doesn’t have is deep tech creds, although he has been involved in multiple activities in the Silicon Valley, noted Francis Petit, associate dean for executive programs at Fordham University

That may be beside the point, though, especially as Salesforce’s board is stacked with industry veterans such as Craig Conway, former CEO of PeopleSoft; Alan Hassenfeld, former chairman and CEO of Hasbro; Craig Ramsey, former senior vice president of worldwide sales for Siebel; Lawrence Tomlinson, former senior vice president and treasurer for HP; and Maynard Webb, chairman of Yahoo.

What Powell is about is leadership, Val Wright of ValWright Consulting, told CRM Buyer. His deep involvement in charity work — he is the founder and chairman emeritus of the America’s Promise Alliance, among other activities — is basically just gravy.

“Exemplary companies consider where they want to grow their business,” Wright said, and they “build a board with the right expertise and knowledge to accelerate that growth.”

Perhaps the question that really should be asked is why Powell would want to take on the job. As corporate governance becomes more and more a matter of regulatory concern and scrutiny, board members can be held liable — or at least faulted — when companies go seriously off the rails.

That does not appear to be a risk with Salesforce, but a board membership also can be very time consuming. That said, the retired four-star general is known for his energy.

Perhaps it comes down to a mix of friendship, admiration for Salesforce’s charitable endeavors, and the appreciation of a new challenge in life, as Powell said upon the announcement.

“After many years of friendship with Marc and admiration for Salesforce.com, I am excited to be joining the company’s board of directors,” he said. “In addition to being on the forefront of innovation, Salesforce.com has been a remarkable leader and has inspired many other companies, as it has made philanthropy a central part of its value system.”