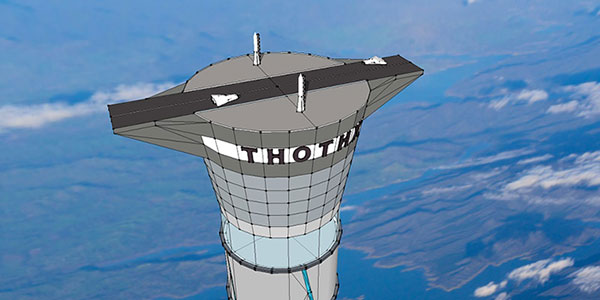 Thoth Technology last month won patents in the U.S. and UK for a space elevator — a 12-mile-high tower that could herald a new era ofspace transportation.

If all goes as planned, the freestanding ThothX Tower will be the tallest structure in the world by far. Dubhai’s Burj Khalifa, currently the world’s tallest building, is a mere half mile in height.

Thoth plans to build a rigid inflatable structure around an elevator that will be actively guided through its pneumatically pressurized interior.

Along with making launches more energy efficient, the ThothX tower would eliminate one of the most volatile variables fundamental to spaceflight. From the tower, spacecraft would launch horizontally rather than vertically.

Vertical landing technology, currently under development, would complete the puzzle.

“Landing on a barge at sea level is a great demonstration, but landing at 12 miles above sea level will make space flight more like taking a passenger jet,” said Thoth CEO Caroline Roberts.

In addition to serving as a spaceport, the ThothX Tower could generate wind energy, the company said. It also could be used for communications and tourism.

Imagine this: A caravan of driverless cars, gliding through turns faster and safer than humans could do, brakes, idles and powers down. Before the fleet, somewhere in Wyoming, lies one of the United States’ two spaceports — two of eight in the world — which, like the others, scrapes the regulatory 12-mile ceiling.

In this scenario describing one of humankind’s possible futures, anxious family members and caffeinated media await the explorers who embarked on the first expedition to Mars — the one that was supposed to be one-way; the one the was supposed to fail.

The space elevator concept could offer more than an alluring fantasy for anyone intrigued by space exploration but impatient with the slow pace of its progress.

Show Me the Engineering

Thoth’s proposed embodiment of a space elevator is “an intriguing, promising concept, because a successful design would hugely reduce the fuel required to put a vehicle into space, thus lowering costs and increasing the feasibility of commercial space travel,” said Charles King, principal analyst for Pund-IT.

Promise is one thing but practicality is another, he noted. Thoth has been aiming to eliminate the hard tether or cable that previous designs have required, because material of suitable strength doesn’t yet exist.

“In other words, there are numerous stages of simple workability for the structure that Thoth has yet to demonstrate,” King told TechNewsWorld. “Practicality comes after that.”

“It’s promising — it’s just that physics stands in the way,” he told TechNewsWorld. “I think transmuting lead into gold would also be an awesome idea.”