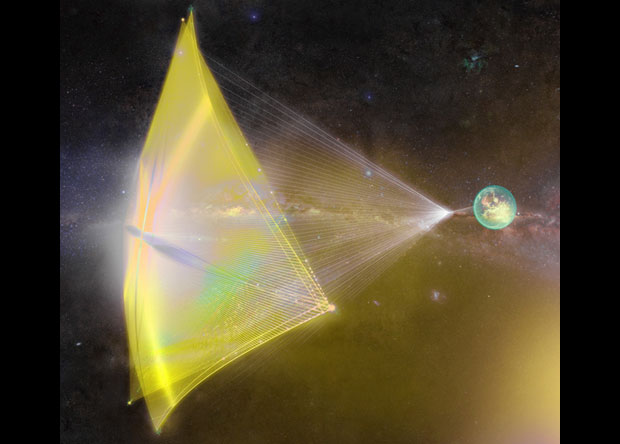 Stephen Hawking and billionaire Yuri Milner on Tuesday unveiled Breakthrough Starship, an ambitious US$100 million effort to send miniature spacecraft to another solar system, but the program might not be quite ready to fly.

It calls for a team of engineering and astrophysics experts to develop nanocrafts with sails propelled by a light beam that would allow the devices to zoom to the Alpha Centauri star system at 20 percent the speed of light.

The Alpha Centauri star system is 4.37 light years, or 25 trillion miles, from Earth. It would take 30,000 years to get there using current space travel technology. However, Breakthrough Starship would be able to scale up laser beams to a level that could propel a nanocraft to historic speeds that would allow it to complete the journey in only 20 years.

“The limit that confronts us now is the great void between us and the stars,” Hawking said at a press conference announcing the project, “but now we can transcend it. With light beams, light sails and the lightest spacecraft ever built, we can launch a mission to Alpha Centauri within a generation.”

Pete Worden, former director of the Ames Research Center at NASA, will lead the project. A team of experts on engineering, science and space exploration will advise its board, which includes Hawking, Milner and Facebook chief Mark Zuckerberg.

Avi Loeb, chair of the Harvard University Astronomy Department, will chair the group of advisors, which includes a stellar list of veteran astronauts, scientists and others. Among them are Mason Peck, former chief technologist at NASA; former astronaut Mae Jemison; and Lou Friedman, an author and engineer who cofounded the Planetary Society with Carl Sagan.

The ultimate cost of the plan would be in the billions of dollars, lining up with some of the most expensive space exploration projects ever developed.

The reason for targeting Alpha Centauri is evidence that a number of potentially Earth-like planets exist in the habitable zone of the three-star system.

A Dash of Cold Water

“Based on current technology, we may be about 50 years away from pulling off a mission this ambitious,” suggested Haym Benaroya, a professor of mechanical and aerospace engineering at Rutgers University.

“There has been progress on many of the technologies, but some are still difficult from an engineering perspective — for example the laser system,” he told TechNewsWorld.

Also, it would take many years to send the information the nanocraft might find back to Earth, Benaroya pointed out.

“I think it may not be as fulfilling a space adventure as some would wish,” he said.

The idea of a nanocraft is based on Moore’s Law, which predicts steady progress in placing larger and more sophisticated devices on microelectronic components. The nanocraft would be gram-scale wafer sized chips, and they would include a number of sophisticated devices, such as cameras, photon thrusters, power supplies, navigation and communication equipment.

A lightsail measuring no more than a few atoms thick would rest on each nanocraft and be accelerated by an array of laser beams to thrust it toward the Alpha Centauri system.

The use of nanotechnology in space exploration is not entirely new.

The study examined directed energy propulsion for exploring other worlds by using space probes to explore deep space in a way that supplements the long-range remote sensing of current orbital telescopes.