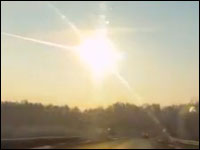 A blazing meteor streaked across the skies of Russia on Thursday, leaving a large smoke trail in its wake before blowing up over the remote town of Chelyabinsk in the Ural mountains. More than 1,000 people reported injuries, and windows across the region were shattered by a deafening sonic boom.

A meteor seen flying over Russia on Feb. 15 at 3:20:26 UTC impacted Chelyabinsk. Preliminary information is that this object was unrelated to asteroid 2012 DA14, which made a safe pass by Earth today. (Image credit: Google Earth, NASA/JPL-Caltech)

On Friday, a 150-foot-wide asteroid named 2012 DA14 whizzed by the Earth with just over 17,000 miles of separation to spare. That makes it the closest approach ever to the planet for a space rock of that size.

The two celestial events were not connected, NASA said; they approached the Earth from different trajectories. Yet they are just two of several meteors and asteroids that have come close to the Earth in the past few years.

There are between 3,200 and 4,700 potentially hazardous asteroids in our solar system, NASA estimated. This week’s sky shows, while fascinating to watch, have spurred discussions about whether the system for detecting potentially dangerous meteors and asteroids is adequate — and if not, what is being done about it.

More on the Chelyabinsk Meteor

The meteor that exploded over Chelyabinsk was the largest reported since 1908, when one hit Tunguska in Siberia. It entered the atmosphere at about 40,000 mph, or 18 km per second, NASA said, and released several hundred kilotons of energy.

The meteor measured about 49 feet and had a mass of about 7,000 tons. It was brighter than the sun, and its trail was visible for about 30 seconds. It had a very shallow angle of entry.

The meteor might have exploded because it was either big or dense enough that it didn’t burn up entirely in the atmosphere, but still experienced “immense aerodynamic pressures [that were] enough to structurally deform it,” said Ben Corbin, a Ph.D. candidate in aeronautics and astronautics at the Massachusetts Institute of Technology. “It’s simply a matter of how much energy is getting displaced at once.”

If the meteor had hit a densely populated area, it could have taken out an entire city, William Newman, professor of earth and space sciences at the University of California at Los Angeles, told TechNewsWorld.

The other big space rock to make the news, 2012 DA14, was discovered on February 23, 2012, and has been tracked closely since then. That raises the question of why the Chelyabinsk meteor seemed to have come out of nowhere.

One reason: The Chelyabinsk meteor was too small, being about 1.5 meters on a side, whereas 2012 DA14 “is about half the size of a football field,” Newman said. “It’s possible to see a railroad car heading towards us at a distance, but it’s impossible to see a baseball or bullet heading our way.”

Asteroids that cross the Earth’s orbit are only visible in daytime, so they’re harder to observe than those outside Earth’s orbit, Corbin told TechNewsWorld. They can be detected with radar, but that technology can only be used to find objects when they’re very close, because radar waves have to be bounced off the subject.

NASA maintains a database of asteroids that could impact the planet as part of its Near Earth Object program.

The program “is able to detect about 90 percent” of the larger asteroids that could impact Earth, and “we’re getting to the point where we’ll be able to detect almost all of those,” Newman said.

The Chelyabinsk meteor shows the need to set up spacecraft circling the Earth to intercept and evaluate incoming threats, argued Rick Tumlinson, chairman of Deep Space Industries, which plans to mine asteroids for their precious metals.

Placing a circle of 10 Fireflies around the planet would cost about US$100 million and take about four years, Tumlinson estimated.

“We’re talking about space budgets,” Tumlinson told TechNewsWorld. “The idea is to send out the Fireflies to take close-up shots, then for the Dragonflies to come back with samples so they can be analyzed. By 2021, we can make contact with the asteroids and figure out which ones can be mined safely, and which will need to have their orbits shifted so they don’t threaten Earth.”

Setting up a planetary defense system would need to be done sooner, Tumlinson agreed, “but you have to start somewhere.”