$10K Will Get You a Clunky, Slow Hoverboard That’s Nothing Like Marty McFly’s 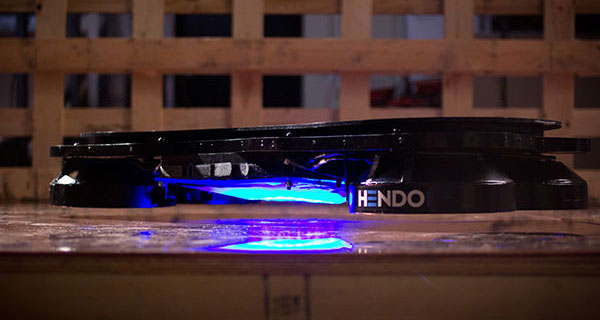 The designers behind the Hendo Hoverboard on Tuesday took to the crowdfunding site Kickstarter to help launch a prototype and bring it to actual production.

The funding period for this project will run from Tuesday through Dec. 15. The team has set a Kickstarter goal of US$250,000 and already raised in excess of $100,000 in the opening hours.

Early investors can get on board — literally — and be among one of the first 10 people to actually get a production model for a pledge of $10,000 or more. Estimated delivery of the still-in-development Hendo Hoverboard is expected to be one year from now.

Getting to ride a Hendo Hoverboard won’t come cheap — a $1,000 pledge will get an extended coach and ride session on the board. Pledges of lesser amounts will provide supporters with just a hover engine system and replicas of the board.

The Future Is Now

This technology has been in the domain of science fiction for decades. In the 1989 film Back to the Future II, Michael J. Fox’s character Marty McFly hops on a floating skateboard to escape from a gang of bullies. However, until now, only movie magic has allowed people to ride a hoverboard.

In fact, earlier this year a hoax video went viral in which professional skateboarder Tony Hawk, along with Back to the Future’s Christoper Lloyd, promoted the HUVr board. That turned out to be a fake product demo created by the folks at Funny or Die.

Unlike the HUVr, the Hendo Hoverboard is actually in the works, and its developers — Greg and Jill Henderson — thus far have created a magnetic lift skateboard that can float above a copper surface. The 100-pound Hendo Hoverboard can hover about an inch off the ground, and can carry a rider across the room.

The Hendo technically isn’t using “hover” technology; rather, its engines create a magnetic field, while compensating for Earnshaw’s theorem, which forbids magnetic levitation in many common situations.

Repelling magnets can be tough to balance. The Hendo utilizes four disc-shape hover engines that create a special magnetic field that literally pushes against itself. That is what generates the lift and levitates the board off the ground.

The same technology that stabilizes it can be used to drive it forward by altering the projected force on the surface below. Because the board is provided lift via a magnetic field, it needs to be ridden on a non-ferromagnetic conductor.

“It is a super cool idea,” said Glen Hiemstra, founder of Futurist.com, but “its actual use will be limited to theme parks and special hoverboard skate parks, as it can only hover over certain metal surfaces, not general ground.

“Given that, the challenge will be to find a large enough market to get to an affordable scale,” he told TechNewsWorld.

The Hendo Hoverboard won’t offer the versatility of the hovering skateboard that Marty McFly used on the big screen, but it could lead the way in the development of such technology. It won’t come without a number of challenges, however — including issues of injury and liability.

“You won’t see me on one of those things,” said Roger Kay, principal analyst at Endpoint Technologies Associates, who added that he has given up trying new sports.

“A hoverboard is a kid’s fantasy without a lot of practical application and a host of downsides — liability and so forth,” Kay told TechNewsWorld. “Some hoverboard operator will definitely make it to the Darwin Awards if it ever comes to market.”

The fact that the boards will need very special places to ride could be a proverbial “bump in the road” that could prevent the Hendo from taking off. These issues could be resolved, however.

“Were hoverboards feasible on general ground, over sidewalks and such, then we may have some issues with the speed and uncertain steering, as we do with skateboards today,” added Hiemstra.

“I would not expect them to have a bigger following or create more problems than the [skateboards] of today, however,” he added.

“Liability is a problem with any transportation device,” noted Rob Enderle, principal analyst at the Enderle Group.

However, “it is doubtful that there is significantly more risk with this than a regular-powered skateboard, scooter or Segway,” he told TechNewsWorld.

“You’re not going to be going very fast, and it does seem to require a lot of skill — much like the Solo Wheel did,” added Enderle. “It would likely be pretty power-hungry, limiting both the top speed and range significantly.”

This technology may not be limited to creating a wheel-less skateboard that allows time travelers to dodge bullies. It could have practical applications in transportation.

“The technology is likely better used for industrial purposes to move heavy things over rough surfaces, and [it would] be interesting to see how it does over water,” suggested Enderle. “The hoverboard is just to bring attention to a technology that is new and different. It potentially lowers the cost of a maglev train, for instance.”

The technology also suggests that perhaps there is too much focus on solving problems that don’t exist and creating devices that on the surface have little practical application.

“Frankly, I would like to see our best minds focus on some of the hard but important problems that we’re facing, like food security, water management, energy generation, CO2 emission, population control, education, disease and political conflict,” said Kay.

“These things are not fun. In fact, they’re the opposite: difficult and unrewarding, for the most part,” he said. “Too much energy is spent on entertainment — on solving first-world problems, or problems we didn’t know we had.”