A quantum mechanics experiment performed by physicists at the University of California in Santa Barbara has been honored by the journal Science as its Breakthrough of the Year. The researchers’ work may shed light on just what actually gravity is, among other things. 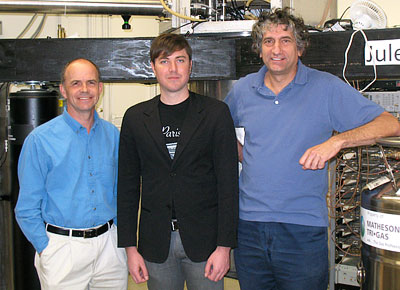 The team, led by Andrew Cleland, showed that a relatively large object’s reactions can be predicted by quantum mechanics theory.

“The real impact of our experiment is more in the foundations of physics in the sense that it helps show quantum mechanics still applies to large objects,” Cleland told TechNewsWorld.

Although gravitation is the weakest of four fundamental forces, or interactions, that make up every physical phenomenon, it’s has several unique features, one of them being that it has infinite range.

Cleland’s team, which consisted of himself, fellow physicist John Martinis and doctoral student Aaron O’Connell, basically took a microwave frequency mechanical resonator and wired it to a superconducting qubit, then cooled the whole thing to near absolute zero and zapped it with a little energy to see what would happen.

They then took this resonator and put it in a quantum superposition, a state in which it simultaneously had zero and one quantum of excitation. Energetically, this is the same as being in two places at the same time.

A qubit is a bit of quantum information. Like a bit in computing, it can have two possible values — a 0 or a 1. Unlike a bit, it can be 0, 1 or both together, which is called a “superposition.”

A superposition is a quantum mechanical property of a particle that lets it occupy all its possible quantum states simultaneously. The particle can be thought of as omnipresent in its superposition, if you like.

Cleland’s team cooled its gadget to its lowest-energy state, in this case zero. This is called the “ground state.”

“We got a dilution refrigerator; it’s a piece of commercial apparatus that anybody can buy for a couple of hundred thousand dollars,” Cleland said. “It’ll cool a few kilos of copper to about two hundredths of a degree above zero.”

His team then cooled the resonator to its quantum ground state, then applied one quantum unit, or phonon, of energy.

A phonon is a quantum mechanical description of a vibration in which a lattice uniformly oscillates at one frequency, known as the “normal mode.”

Cleland’s team then measured the result with “classical equipment,” Cleland said. The resonator has a resonance frequency of 6 GHz, and the energy exchange rate was 100MHz, Cleland stated.

The team had to do this repeatedly in order to get and verify its results.

Possible Uses for the Discovery

Cleland’s team made its discovery while it was trying to build a quantum computer.

Quantum mechanics directly use quantum mechanical phenomena such as superposition and entanglement to work on data. Entanglement is a state in which two or more objects have their quantum states linked together so that you have to describe both and can’t describe either on its own.

Cleland’s team also might use it in quantum communications, wherein quantum information is encoded into invisible light.

Quantum information has no analog in standard information theory. The quantum nature of systems must be preserved in order to process information in a quantum computer or to distribute a secret key in quantum cryptography.

However, Cleland’s vision is a little more down-to-earth, in a sense — in the nearer future, the results of the experiment might help physicists better understand gravity.

“Quantum mechanics works really well for small objects like atoms and electrons,” Cleland said. “But for large mechanical systems, there’s not been any good demonstrations, and there’s been this question as to whether quantum mechanics really applies to big mechanical things.”

Even though the object used in the experiment was the size of a human hair, it was still “a trillion times bigger” than those used in previous experiments. It shows that the laws of quantum mechanics apply to relatively large objects.

Widespread, practical application of this kind of research is still a long way off, Rob Enderle, principal analyst at the Enderle Group, told TechNewsWorld. “It’s to prove quantum theories and build up a base of knowledge so that more complex and more practical applications can be derived.”

Eventually, products made using this knowledge might relate to near-instant communications over long distances, new sources of energy, and more efficient use of energy, Enderle stated.

“We are at the stage where we’re looking to see if it’s possible to walk,” Enderle remarked. “Then we have to figure out how to walk; then actually walk. Running is the goal.”

Short of a major breakthrough, we’re 20 to 50 years away from mass-market products based on advances in quantum mechanics, Enderle said.