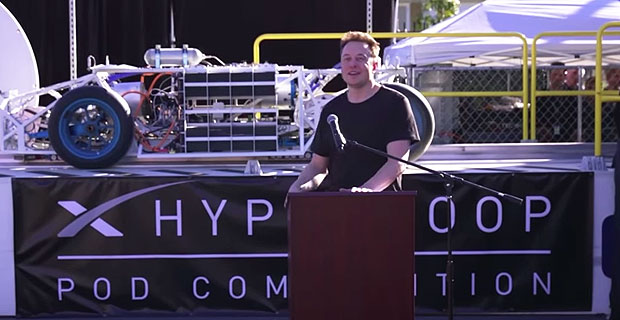 Elon Musk’s hyperloop dream began to take shape in reality last weekend as 27 teams, including six from outside the United States, participated in a competition to create the mass transit vehicle of the future.

The competition in Hawthorne, California, sponsored by SpaceX, which Musk founded, attracted teams made up mostly of students who created pods designed to run on hyperloop transportation systems.

In a hyperloop system, the vehicles, or pods, travel in a vacuum in tubes at speeds close to the speed of sound. To do that, the pods have to be suspended slightly off the ground, typically by riding on a magnetic field.

For its competition, SpaceX built a test chamber that was three-quarters of a mile long and six feet wide. The company capped the speed at which a pod could go at around 50 miles per hour.

In order to get to test its pod in the vacuum chamber, a team had to pass a rigorous 101-point review. Only three teams could do that: Delft University of Technology of The Netherlands; Technical University of Munich, Germany; and the Massachusetts Institute of Technology.

Kind of a Drag

Operating in a vacuum is important to hyperloop systems because it reduces friction. “Hyperloop is all about friction,” said Adonios Karpetis, a faculty advisor to the Texas A&M aerospace team, which competed at the event.

“You have to minimize the air friction in the tube,” he told TechNewsWorld.

By creating a vacuum or near-vacuum in the tube, the drag of the vehicle is nearly eliminated, which allows it to reach tremendous speeds, as high as 700 miles per hour. By contrast, a Boeing 747 has a cruising speed of 570 miles per hour.

“It’s like operating a ground-based vehicle at an altitude of 100,000 feet where the air is very thin,” said Rick Williams, an advisor to Auburn University’s hyperloop team.

A hyperloop vehicle has an advantage over an aircraft, though.

“Once the vehicle reaches its cruising speed, it will coast for a long ways because of the minimal drag,” Williams told TechNewsWorld.

“From an energy standpoint, it’s going to be significantly lower,” he said.

A team didn’t have to use the chamber with the vacuum enabled, though, to learn about improving its pod’s design.

“We could see the different engineering approaches taken by the teams and talk with them about their pods,” explained David Goldsmith, an assistant professor at Virginia Tech University, which participated in the competition.

The competition also helped the teams define the parameters of their knowledge.

“We now know what we don’t know,” Texas A&M’s Karpetis remarked. “We did not know a lot of little things, from electronics, to breaking, to levitation, to batteries.”

Students also learned the value of dealing with the unexpected.

“We learned a lot about being flexible,” said Claire Holesovsky, Badgerloop operations director at the University of Wisconsin – Madison.

“A lot of times, things don’t go your way, so you have to have alternative plans and think quickly on the spot,” she told TechNewsWorld.

The teams now are looking forward to this summer, when the next round of the competition will be held. They’ll be able to take what they learned in this last round and use it to improve their pods for the next one.

While there are many people who would embrace the idea of a 30-minute hyperloop ride from Los Angeles to San Francisco, Carlo Ratti, director of the Sensesable City Lab at the Massachusetts Institute of Technology isn’t one of them.

“The other week I was in London and I had to go to Paris. I could have traveled from the city center to Heathrow Airport, flown 45 minutes, and then taken another transfer from Charles de Gaulle airport to the city center,” he said.

“This the kind of experience that hyperloop proposes between San Francisco and Los Angeles, with long transfers to suburban stations and then a short trip in a small, dark tube,” Ratti told TechNewsWorld.

“Instead, I enjoyed very much spending two hours on the Eurostar. I was online, the comfortable seat became my workplace during the trip, and I could enjoy the gorgeous English and French landscape all around,” he explained.

“As our trains — and tomorrow our self driving cars — become an extension to our offices, homes or even bedrooms, shouldn’t we focus on making them more comfortable and point-to-point, instead of thinking about such a 20th century idea of fast travel between large hubs?” Ratti asked. “Then, the journey could really become the destination.”