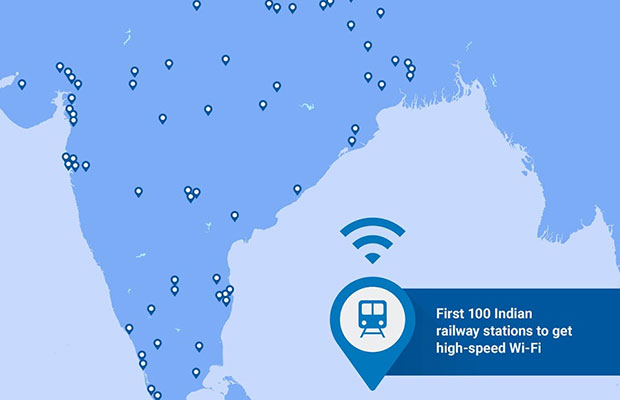 Modi is expected to promote his Digital India initiative during his U.S. visit. One objective of the plan, which has a 2019 goal, is to bring high-speed Internet to rural areas of India.

Google will work closely with Indian Railways and with RailTel, which provides Internet service along the railway lines. The first stations are expected to come online in the next few months, and 100 stations will be connected by the end of next year, Pichai said.

The undertaking is India’s largest public WiFi project, he added. With 100 stations online, the project will make WiFi available to more than 10 million people who travel through the stations each day.

India: The Next Frontier

The Indian subcontinent has more Internet users than any nation in the world apart from China — but nearly 1 billion Indians aren’t online, Pichai said.

The WiFi program is meant to get them online — and it could mean more eyeballs for Google’s products.

“Also, India is the next big frontier, now that China’s market is maturing,” he told TechNewsWorld. “Conclusion: Google is being rational.”

“Google’s free WiFi service will be a boon for the millions of Indians who travel by train daily, but it also should reinforce the company’s brand among those consumers and business users,” said Charles King, principal analyst atPund-IT.

Google’s project could benefit from the density of India’s population centers and the robust railway infrastructure that connects them. Indian Railways, the state-owned and operated system, is one of the world’s largest railway networks and a primary travel method for Indian citizens.

“It’s an intriguing project, due to both India’s population density and the wide use of the country’s rail system,” King told TechNewsWorld.

If successful, the Indian Railways project could pave the way for other projects that aim to bring Internet connectivity to the unconnected world.

However, this effort and others like it will have obstacles to overcome.

“The challenge of bringing Internet to developing countries is a unique one,” said Kevin Krewell, principal analyst atTirias Research.

“There’s limited or no infrastructure,” he told TechNewsWorld. “Power can be a problem. Running new wires is difficult — and keeping those wires from being stolen even more so.”

That is why Google and rival Facebook have experimented withdrones andballoons, added Krewell.

India Railways benefits from the fact that RailTel, which provides Internet services such as RailWire, already has a fiber optic network running along the railway lines.

Similar infrastructure may not be so readily available in other developing markets, and even in India it may not be enough to reach the 1 billion people that Pichai and Modi would like to see obtain Internet connectivity.

Bringing “broadband Internet using an existing piece of infrastructure is unique to India,” said Krewell. “It should be helpful, but it’s not life changing for rural Indian people.”