Threat From Above: How to Stop Hostile Drones 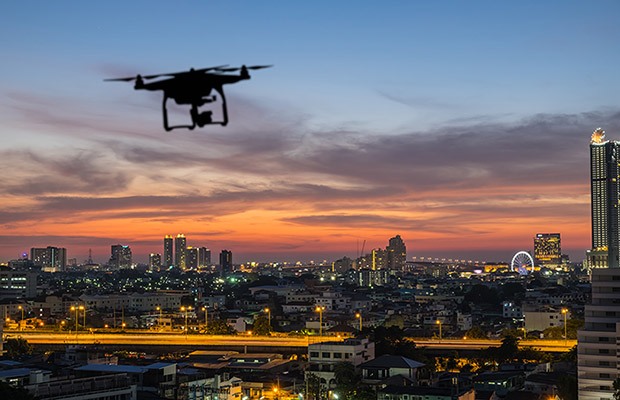 The drone category is broad — it includes toys for hobbyists, tools for commerce, and devices used for a variety of military purposes. They range in size from massive military drones that can be equipped with 500-pound laser-guided bombs andHellfire missiles, to small hobbyist devices that carry little more than a camera.

Drones are dangerous not only because they can be controlled remotely, but also because they can be operated with little human intervention. When used with even a simple computer, a drone can be programmed to enter “enemy” airspace and conduct an attack.

Such a sortie doesn’t need to be limited to a battlefield. It could be mounted against seemingly soft targets, such as athletic stadiums, crowded urban areas, and pretty much anywhere a foe might want to strike.

“There are many possible threats from small drones, including Wi-Fi sniffers that can hack into wireless networks, but there is no evidence this has actually happened yet,” said Michael Blades, vice president for aerospace, defense and security at Frost & Sullivan.

Some of the more ominous threat vectors: “platforms carrying weapons of mass destruction, like anthrax or other biohazardous materials; platforms carrying small bomblets for antipersonnel oranti-vehicle, which is occurring in the Middle East; and platforms with cameras that can conduct industrial espionage,” Blades toldTechNewsWorld.

In addition to use by the military, there are commercial applications for drones — including package delivery. Amazon is just one of several tech firms that have explored ways to use drones in such a fashion.

The worry is whether such drones that could deliver a package or dinner could bring something more nefarious, such as a bomb.

“Drones are tools that are intrinsically neutral. The user determines if they will be used for good or bad, just like in the case of cars, for example,” suggested Yariv Bash, CEO of on-demand drone delivery service Flytrex.

“Due to strict regulations, it is unlikely that a commercialized drones system can be used malevolently,” he told TechNewsworld.

“Flytrex is working with regulators to ensure the highest safety standards to help ensure that drones cannot be used for malicious purposes,” Bash added.

However, the comparison with cars should be considered, as terrorists have used car bombs for decades, and more recently trucks have been hijacked and used as weapons. It is a sadly likelihood that even small off-the-shelf drones could be weaponized in ways that the original designers may not have considered.

“These commercial drones are becoming more sophisticated and autonomous,” warned Nick Verini, CEO of ‘SmartRounds, a company that has been developing an anti-drone system.

“That is, they don’t need a pilot to reach a particular target, and they can be programmed to follow a predetermined path using GPS or other means,” he told TechNewsWorld.

“They used to be considered toys but no longer — they are increasing in size, range and payload, which can be an explosive and can be delivered with precision,” added Verini.

Colorado-based SmartRounds this week announced that it has developed non-lethal “munitions” for dealing with small armed drones, including surface-to-air and air-to-air guided missiles — a new class of smart “fire and forget” projections that could be used by the military, Homeland Security and law enforcement to take down UAVs that present a clear and present danger to those on the ground.

The company received a U.S. patent for its Smart Anti-Vehicle AerialGuided Engagement (SAVAGE) missiles. These 40mm counter-UAV rounds can be fired from custom-built multi-tube ground launchers, or on a special unit mounted on another drone. The rockets feature a titanium nose cone that with enough kinetic energy can disable or destroy a threatening drone upon impact.

The SAVAGE self-guided missile is designed to disable or destroy a small enemy unmanned aerial vehicle, or drone.

“Our SAVAGE weapon system — missiles and launcher — is designed to disable or destroy these armed drones by using computer vision to detect and track them in flight and impact them with sufficient kinetic energy,” explained Verini.

The SAVAGE missiles are launched at a high velocity — in excess of 350mph — and each is equipped with an on-board CPU/GPU microprocessor to keep it on target. Computer vision object detection, along withAI-based target tracking, plus the ability of multiple SAVAGE rockets to communicate further, maximize effectiveness when dealing with multiple threats.

The U.S. military has shown interest in the SAVAGE system, as have its NATO allies, according to the company.

The U.S. military, which has used drones for reconnaissance as well a sin a “drone strike” capacity throughout the Global War on Terror, is among only a handful of nations capable of creating large-scale weaponized drones.

However, terrorist groups such as the Islamic State in Iraq and Syria(ISIS) have been able to utilize small drones and quadcopters to droplight explosives and grenades. The threat from other terrorist groups weaponizing commercial drones is one that the intelligence community and law enforcement in the United States also have taken seriously.

FBI Director Christopher Wray testified at a 2017 Senate hearing about the potential threat that terrorists might use drones against U.S. interests overseas.

The U.S.military, working with private industry, already has undertaken efforts to develop the tools to take down drones before they can strike. There have been efforts to develop electronic warfare innovations to jam enemy drone signals, but there are several initiatives that take a more direct approach.

“There has been quite of bit of activity with regard to developing systems that can detect, locate, identify, track, and deter or mitigate small drone threats,” said Frost & Sullivan’s Blades. “There are well over 200 companies globally that are marketing and/or developing over400 systems to provide a solution for the threat of small drones.”

Not all the efforts need to be as blunt-force as missiles and rockets however.

“There are ways to safely take down drones,” said Blades. “There are net guns that can be fired from the ground or from other drones that have parachutes attached that can lower captured drones safely.”

One issue, however, is that the U.S. Federal Communications Commission and Federal Aviation Administration allow very little leeway for the use of such systems in their stringent regulations against activities such as wire-tapping, jamming radio signals, downing aircraft.

That is why these systems are more commonly used in areas like theMiddle East where the governments are more autocratic.

“In the U.S., other than for FAA testing and the like, all counterUAS/UAVs use is limited to federal government agencies,” notedBlades. “It will be some time before there are ‘rules of engagement’ that allow law enforcement and other non-federal agencies to use counter drone systems. Many of the systems being marketed have not been tested to determine how they might affect public and private radio spectrums, or if they detect, track and mitigate as advertised.”