Last week was kind of an amazing week. Google’s chief counsel earned himself a new title: chief whining officer. He tried to blame Microsoft, Apple and Oracle (missed EMC) as companies that were colluding to force Google to stop stealing other people’s stuff. Google’s whiny argument made me wonder if anyone over there actually reads what they write.

Also, McAfee released its RAT report, which basically says there are two types of organizations in both the private and public sector: those that know they’ve been hacked and those that haven’t found out yet.

Yes, everyone evidently has been penetrated for months, according to the results from a command-and-control server McAfee accessed. Homeland Insecurity clearly had an “oh crap” moment and was hardly alone.

I’ll get into both of those developments and conclude with my new favorite Laptop: the Lenovo ThinkPad X1.

It is hard to read the blog post from Google’s new chief whining officer (otherwise known as its chief counsel) without smoke coming out of your ears. But here it is, just to show I’m not making things up. Basically, it says that there is something huge happening because Apple and Microsoft are collaborating.

Apparently he wasn’t aware that the two companies have collaborated on and off since their founding. Microsoft developed the initial productivity layer for Apple, invested US$100M in its turnaround, and continues to make Office for the Mac. Apple defended Microsoft in the EU antitrust case. Yes, when something is in their common interest, they collaborate.

However, you may recall that Eric Schmidt was on Apple’s board, and Steve Jobs actually mentored the Google founders while they were basically — and secretly — creating an iPhone clone using information Steve Jobs shared with them in confidence.

Stealing from Steve Jobs while he is helping you is pretty… Well, I’ll leave the choice of word up to you, but that is likely why Apple and Google won’t be partnering anytime soon.

The CWO eloquently whined that Microsoft and Apple formed two consortiums of companies in order to buy patents to put Android out of business, and that Microsoft has been making $15 on many Android device sales but wants to make $15 from all of them. Apparently, he felt he needed to leave out the part about Microsoft being able to do this because Android infringes on its patents as well as Apple’s.

The pools of patents Microsoft is relying on are “dubious,” according to the CWO, but he left out the part about Google itself bidding more than $3B (I kid you not — it actually bid unique prime numbers, including Pi, or $3.14B for one of the pools). That suggests either that they weren’t “dubious” to Google, or that Google has no money sense, or that it was just momentarily insane.

In this plot to go after Google, Google itself was asked to participate in one of the consortiums — and this is the crazy part, it said no, because it would somehow put open source at risk if anyone owned them. Except this is the pool that Google bid more than $3B on itself, suggesting the truth is it wanted to own them exclusively. Poor Google, my ass.

Finally, Google’s primary point is that this was all done to stop Android, and that these companies that spent billions have this as their goal — ignoring the far more likely cause, which is that they wanted to get the company who’s benefiting from the patents to stop stealing their stuff and giving it to others for free.

Having been there, nothing pisses you off more than having to compete with the stuff you paid for or developed.

So, to net this out: A number of companies allege Google stole their stuff; Google didn’t want to participate in buying more stuff it was also using without permission; Google is now whining because the companies that did buy that stuff may want to sue Google for the additional things they paid for that they think Google is stealing.

Google wants to make this about poor Google and the evil companies that want to stop them, when it is really about a firm that stole a bunch of stuff and both wants to keep using it and doesn’t want to pay for it. Seriously, Google stole from Steve Jobs while he was both helping them and struggling with cancer, which alone suggests it’s on the wrong side of this one.

Google has historically been really creative, and I give it one-handed applause for trying to redirect what it’s doing by creating the Office of the Chief Whiner. However, I kind of hope others don’t follow their lead.

Living in an Insecure World

The McAfee “Diary of a RAT (Remote Access Tool)” report is one of the most frightening things I’ve ever seen (more on this here).

It showcases that attacks against firms have been ongoing, have been averaging nearly nine months per attack, and have been incredibly invasive. They’ve had both financial and political goals. They may have altered elections and significantly contributed to the global economic collapse. And they have hit every size of organization in both the public and private sector.

Many of us have warned we were going to be in a Cyber World War. It appears that war started months ago, and we weren’t even aware of it. You see, this isn’t a U.S.-only attack — every major geography has been affected, and the total amount of data taken is in the petabyte range.

Now, when you steal that much data, it still has to be parsed and consumed or altered, which takes time — but the fact that these attacks have been so pervasive indicates that their full impact hasn’t been felt yet.

It kind of makes you wonder about the market collapse last Thursday coming so soon after the published results of this study. It’s almost as if someone wanted a distraction, was doing a test, or was providing an example of what could happen.

The attack method being used is called “spearfishing,” which entails targeting an individual with specifi information that makes the attacker look like a trusted source. As you may recall, the RSA breach earlier this year — which resulted in a semi-successful attack on Lockheed — was a spearfishing attack. RSA was breached, but Lockheed was not.

Once in, the attacker appears trusted, so the attack can continue for months without being identified. McAfee details what can be done (but generally isn’t) to mitigate the exposure, including the use of email and Web security tools; comprehensive endpoint protection; firewall tools; network and database monitoring tools; and centralized management. Through the use of these measures, an attack, once discovered, can be quickly blocked. McAfee did omit one tool though, and that is the user. Proper user training can cause these attacks to more reliably fail.

Wrapping Up: Google Needs to Grow Up, and You Need to be More Careful

We truly live in interesting times (and that is a Chinese Curse), when large vendors seem to translate “open source” into “license to steal” and feel that whining is a strong competitive response.

Google has to learn it really can’t have its cake and eat it too. If it wants to build something “innovative,” then maybe it should start by not copying someone else.

When faced with a consortium bidding on something it needed, it was free to form its own consortium. Dell, Samsung, HTC, Lenovo and Motorola might have participated if they’d been asked, but then Google would have had to share control of the result — and Google doesn’t share. Also, the other companies would have had to trust Google, which is proving to be increasingly problematic.

On the security side, the RAT report is frightening. It recognizes that spearfishing can be used to compromise your employer’s or your own assets. You need to recognize that the email or phone call that seems to be coming from someone trusted may not be, and restrict access to any personal information until you can be sure about the identity of the caller.

Remember, IT knows your password or can use administrator privileges to gain access to your stuff, and banks have other ways to get to your account information — they don’t need your PIN. If folks are asking for something they shouldn’t need, there is a good chance they aren’t who they pretend to be. Keep that rule close to your heart and be safe.

Product of the Week: The Lenovo ThinkPad X1

Let’s call the Lenovo X1 the strongest argument against a post-PC world the market has yet delivered.

This is truly a beautiful laptop, with sleek lines and updated features. 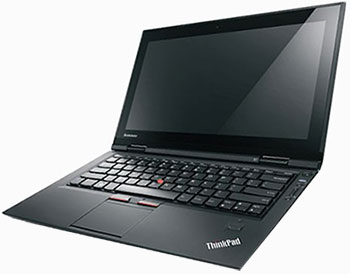 These features include a Core i3 processor, a superbright 13.3″ screen, 4 GB of memory, a carbon fiber roll cage, Gorilla Glass (Mil-Spec), a lighted keyboard and HDMI out. Finally, it has an HD-level built-in camera and a digital array microphone for VoIP (Skype) calls.

It represents one of the boldest moves a PC OEM has yet made with a business-focused laptop. Other business features are a fingerprint reader for security and a battery that will charge to 80 percent in 30 minutes for those of us who forget to charge our laptops before a plane trip.

It starts around $1,200. The optional slice battery that gives it around 10 hours (iPad range) of battery life is $180 more. This comes out to about $500 more than a fully loaded iPad and, OMG, you can actually use it to create things, not just consume them.

This is one beautiful laptop, and I’m looking forward to using it while it is on loan to me. The Lenovo X1 is the strongest argument yet for why the PC is far from dead and, as such, it is a natural for my product of the week.