The W510 is offered in four versions — as a standalone tablet PC with 32 or 64 GB of RAM, with a keyboard dock, or as a full-fledged business device running Windows 8 Pro. 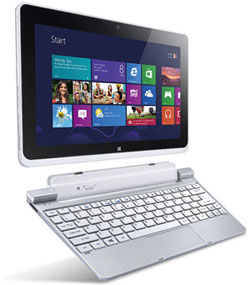 “Acer has designed its new Windows 8 tablet PC to serve customers who want to maximize productivity and have a first-rate tablet experience,” Acer spokesperson Kelly Odle told TechNewsWorld. “The new Iconia W510 provides a versatile environment for customers to stay productive and be entertained.”

The front camera is a 2 MP device and the rear one an 8 MP device. Both offer 1080 HD audio and video recording. The rear camera has autofocus and LED flash support.

The four models all have a Micro-HDMI port, a micro SD card reader port, and a micro USB 2.0 port.

Battery life is up to nine hours for the 32- and 64- GB basic tablets, and up to 18 hours. The other two versions both include the keyboard dock, which has a second battery that provides another roughly 9 hours of life.

The corporate version, running Win 8 Pro, will support enterprise legacy programs and provide security and authentication through the Trusted Platform Module, which is optional, Acer said. It will come with a two-year warranty.

The basic $500 model will compete directly with the iPad, but “it will be difficult for [Acer] to gain traction at that price point,” Julien Blin, a directing analyst at Infonetics, told TechNewsWorld.

“The best way to gain traction is to undercut Apple [by offering the tablet at] $200 to $300, but then Acer would have to compete with Amazon, Google’s Nexus 7 and the Nook Color,” Blin continued.

Although the top-of-the-line model “will appeal to some business users as Windows 8 is a good fit for the enterprise, I don’t think that Windows 8 tablets will drive significant sell-through like the iPad based on the premium price,” Blin said. Microsoft “will try to convert” many of their 1.3 billion Windows users to its Win 8 tablets and, while they may not generate significant sell-through at the beginning, “over time it might be different.”

It would be best to compare the Iconia 510 to Android tablets rather than the iPad, Jeff Orr, a senior practice director at ABI Research, suggested. “There’s Apple and there’s the rest of the market, and going against the rest of the market depends on providing a coherent story on why your product is a better choice.”

The hybrid form factor is fine because “there’s a market for [them],” Infonetics’ Blin remarked. “Business users want to use a tablet that’s highly portable and lets them be productive on the go with robust B2B features such as virtual private networks, mobile device management and FIPS.”