Maybe the “printer” part of “3D printer” is not exactly the right word, since printing has so long been thought of as a two-dimensional process of applying ink to paper. But the term, like the 3D printing process itself, seems to be here to stay.

3D printers, which use a wide range of technologies to produce actual objects from digital files, are being used by individual inventors as well as small and large manufacturers, and they are revolutionizing what it means to conceive of, design and make things.

All 3D printing begins with a CAD design, usually saved in STL format and sent to the printer, which is essentially a manufacturing machine. With most 3D printing, layers or cross-sections are built one on top of another, usually using some form of plastic, polymer, metal or other material.

How these layers are created and fused varies widely. Such processes as selective laser sintering (SLS) and fused deposition modeling (FDM) melt materials to create the layers.

Another method uses an inkjet printing system that spreads a powdered layer of plastic or resin, which is then covered with a binding agent, and this is repeated layer by layer until the object is complete.

3D printing processes come under a general label “additive manufacturing,” in which material is added to make a shape, as opposed to “subtractive manufacturing,” which involves carving away material. Because of its additive nature, 3D printing can be used to create anything from a simple cellphone case to a one-piece object with internal ducts, tubes or barriers.

“3D printing has built up an awareness of what’s possible with additive manufacturing,” said Scott McGowan, director of marketing with the 3D printing company, Solid Concepts.

“The freedom of design realized when using additive manufacturing for end-use products opens up design possibilities not available with traditional manufacturing methods,” he pointed out. “It’s also allowed designers and engineers to embrace the prototyping process more fully than ever — giving them the opportunity to go through more design iterations and develop a better product.”

As the technology has improved, the speed, accessibility, and cost of 3D printing have dropped dramatically, and it’s quickly becoming a part of our everyday lives.

“The name of the game is making the machinery more powerful and more accessible,” said Joe Titlow, vice president of product management for Z Corporation, which sells 3D printers that range in price from US$14,900 to $59,900.

“The goal is to make 3D printing as fast and as easy as printing on paper,” he told TechNewsWorld.

With a used 3D Dimension printer he bought for about $20,000 at a local shop, Bradley Rigdon started his home-based 3D printing business, Print to 3D, in 2007. Since then, he has developed a thriving business producing 3D objects for clients around the country, creating customized game pieces, parts for virtual reality goggles, prototypes for Fortune 500 companies, and many other objects. 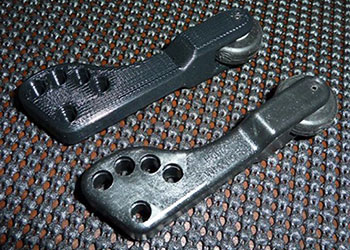 Radio control truck wheelie bar designed by Bradley Rigdon of Print to 3D. The top one is the FDM 3D printed prototype and the bottom one is the final injection molded part.

“It combines what I learned in robotics, machine, CAD and electronics classes,” said Rigdon, who was working at a machine shop before striking out as a homegrown manufacturer. “I never really wanted to work for anybody else, and this was something I could do.”

It’s not just small, home-based printing businesses serving the 3D printing market. Solid Concepts, for instance, is a custom manufacturing company founded in 1991 that creates everything from prototypes to products themselves for its clients. The company works in a variety of industries, including medicine, technical fields, and even special effects for films.

“I’ve seen alien skeletons rising out of the goo down there,” McGowan told TechNewsWorld.

A major part of the company’s business is creating prototypes that are the first stage in the design process, allowing designers to see, tweak, and improve a 3D model — sometimes going through multiple prototypes before arriving at the final design.

“We work with design engineers to produce products to go out to market,” explained McGowan. “Before investing money, people want to make sure they’ve designed the right thing.”

Other print shops, such as Shapeways, offer their services directly online to customers, who can send in 3D digital files and have them printed in a variety of media, such as polymers, stainless steel, glass, silver, or ceramics. Designers can also sell their print-on-demand wares through the site.

“We have an incredibly diverse community of users, from students of design, engineering and computer graphics, to hobbyists such as model trains, twisty puzzles and dice collectors, through to jewelers, artists and professional designers such as architects, industrial and graphic designers,” Duann Scott, a communications representative for Shapeways, told TechNewsWorld.

“We also have people with no design or making experience using our co-creators to customize existing designs to make meaningful personalized products,” noted Scott.

Brave New World in the Making

In not-so-distant future, 3D printers might be as common in peoples’ homes as laser printers are now — opening up all kinds of possibilities for repairing, creating, designing, altering, sharing and sending objects.

“Within the next several years, we’ll see printers in many households,” said Rigdon. “When something is broken, people will be able to download design files for replacement parts and create them at home.”

In essence, the lines between thought and reality, design and execution, digital file and object, are blurring.

This is a new, exciting era that we’re only now beginning to understand, according to Clement Moreau, CEO and cofounder of 3D printing company Sculpteo.

“Thanks to 3D printing, you will be able to say : ‘I sent you a new chair on Facebook,'” said Moreau. “This is cool.”