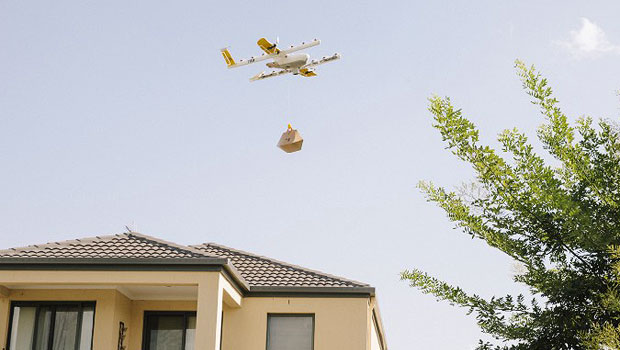 Shoppers can use Wing’s mobile app to place orders and receive deliveries within 30 minutes.

The launch follows an 18-month test period in the area, with more than 3,000 packages delivered.

The normal distance between drones and people is set at about 100 feet (30 meters), but CASA has reduced it to 16.5 feet (5 meters) above people and 6.5 feet (2 meters) to their side while the drones make deliveries.

There are plans to expand the Project Wing service to more customers in Harrison and Gungahlin.

Drone deliveries could add an estimated US$21-$29 million in annual revenues to local businesses, according to reports.

Paving the Way for the Future

“This is a huge deal,” said Ray Wang, principal analyst at Constellation Research.

“Australia is seen as the pioneer and most drone-friendly government,” he told the E-Commerce Times. The test “sets the stage for other aviation authorities to clear the way for future permits.”

Drones, or unmanned aircraft systems, have been “rapidly increasing in number, technical complexity, and sophistication,” the United States Federal Aviation Adminstration noted in its five-year roadmap for the integration of UAS into the U.S. National Airspace System (NAS)

The FAA expects UAS to operate harmoniously alongside manned aircraft, occupying the same airspace, and using many of the same air traffic management systems and procedures.

It released its roadmap last summer, following on the heels of a U.S. National Academies of Sciences report that characterized the FAA’s approach to safety risk assessments as overly conservative. The NAS report suggested an overhaul of FAA procedures.

“The desire for an absolute safety guarantee is slowing things in the U.S.,” observed Michael Jude, program manager at Stratecast/Frost & Sullivan.

On the other hand, “the U.S. is much more dependent on civil aviation than many other countries,” he told the E-Commerce Times. Because its skies are crowded, “the FAA is sensitive to the mayhem that a drone failure could have on passenger aircraft.”

This conservative approach “can be a significant barrier to introduction and development of this emerging and rapidly changing technology,” the NAS pointed out. It listed delivering medical devices to patients in cardiac distress among the benefits of drone delivery.

“The most important consideration for us is ensuring that package delivery operations are safely and securely integrated to protect the airspace as well as the safety of people or property on the ground,” said FAA spokesperson Marcia Alexander-Adams.

The FAA is “working with a number of companies to develop guidance and certification frameworks for drones intended for package delivery,” she told the E-Commerce Times.

However, it does not yet have a definite date when those frameworks will become widespread.

“We really need to work out how to intermix drones with commercial traffic and think through security aspects of the related platforms,” said Rob Enderle, principal analyst at the Enderle Group.

“We also need to have a better solution for people attempting to weaponize these things,” he told the E-Commerce Times.

Drone deliveries will become a reality in the U.S. within 24 months, predicted Constellation’s Wang.

However, for that to happen, “integration of UASes and revision of the FAA’s supervision must occur while we are updating our Air Traffic Control systems,” he said.

The U.S. already has begun heading in that direction, as indicated by the following:

“We have already seen preliminary testing of package delivery,” the FAA’s Alexander-Adams said. “Project Wing did some delivery testing with the UAS Test Site in Virginia and, most recently, the FAA worked closely with the North Carolina Department of Transportation, Matternet, and WakeMed” to approve UPS’ medical samples deliveries at WakeMed.

Delivery of high-value products may be the way to go.

“You have to deliver a lot of tacos to justify an investment in drones,” observed Frost’s Jude. “Most businesses would do better simply investing in home delivery by courier.”

Soaring Above the Crowd

Amazon, which pioneered the concept of airborne drone delivery back in 2016, seems to have been left behind.

It reportedly was left off last year’s Department of Transportation UAS Integration Pilot Program, and its drone delivery efforts have fallen off the radar since then.

Amazon is lagging, Wang suggested, noting that “the government is slightly prejudiced, given the current administration.”

That said, “Amazon has certainly been thinking about drones, but it’s also about making money,” Frost’s Jude remarked. “The fact that Amazon is not first to market should be a big hint to anyone hyping this technology.”

Amazon is just biding its time, Enderle suggested. “They are letting others plow the field for them, but they aren’t snoozing. Once this type of delivery is approved, I expect Amazon to jump in aggressively with much of what’s needed to be done, done.”

The Transportation Revolution: Much More Than Self-Driving Cars