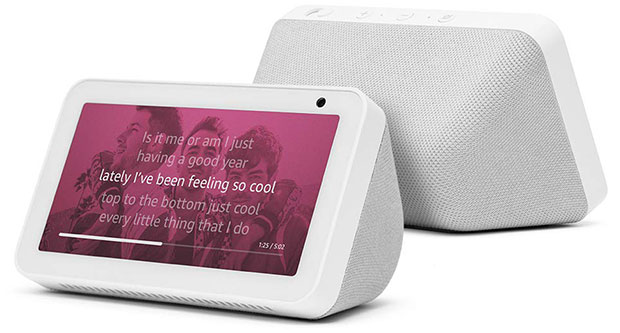 Amazon on Wednesday announced the Echo Show 5 and began taking preorders for the device, which will begin shipping in the United States late next month.

This third-generation Echo Show is called the “5” because it has a 5.5-inch diagonal display.

The Echo Show 5 is available in the line’s standard Charcoal and Sandstone colors. It is priced at US$90.

“This is just one more device to worry about,” remarked Michael Jude, program manager at Stratecast/Frost & Sullivan.

“It’s sort of redundant. There’s nothing that this thing does that a Kindle Fire tablet can’t do, and it has a smaller screen than the Fire,” he told TechNewsWorld.

In fact, the Echo Show 5’s screen is smaller than many smartphones, Jude noted. “You might just use your phone to do everything this device does.”

New Alexa routines are available on the Echo Show 5, such as a nighttime routine that turns off the bedroom lamp and begins playing soothing sounds.

Users can personalize the Echo Show 5’s home screen with a variety of new clock faces or a photo. They also can connect the device to their Facebook account and play a slideshow of their photos, view a specific album, or set their photos to rotate in the background.

Users can swipe left from the screen’s far right to access shortcuts and discover Alexa’s features.

An upcoming new integration with wikiHow will let users access hundreds of how-to videos by voice.

Users who have Echo Show 5 units in multiple rooms will be able to drop in virtually on another room or make an announcement.

Less May Be More

The Echo Show 5 has 1-MP camera, unlike its predecessor, which has a 5-MP camera.

The Echo Show 5 has only one speaker. It lacks the Zigbee radio its predecessor has, so it cannot be used as a smart home hub.

However, “most Zigbee homes already have a Zigbee hub, and Alexa will also work with Insteon,” noted Rob Enderle, principal analyst at the Enderle Group.

“Having redundant hubs can lead to some interesting problems,” he told TechNewsWorld. “I’m a fan of the single hub approach.”

Over the years, Amazon’s voice-activated devices have given rise to complaints about the company’s approach to privacy.

To address the issue, the Echo Show 5 has the following features:

The delete features “seem like good additions, but will require users to be constantly diligent about what is being recorded,” cautioned Willy Leichter, VP of marketing at Virsec. However, typical users “will likely just leave it on.”

Amazon “could make the default not recording and only turn it on when explicitly authorized,” he told TechNewsWorld. This “seems highly unlikely as the value of the data collected is enormous. If you don’t want to be recorded, explicitly turn the device off or unplug it.”

Many users have requested a “completely off” feature from Amazon, remarked Mounir Hahad, head of Juniper Threat Labs at Juniper Networks.

“Some of them have opted to plugging the device behind a smart plug and scheduling a power off time,” he told TechNewsWorld.

The company “should delete voice recordings, transcriptions and metadata by default after they’ve been used,” he told TechNewsWorld. It should “give users the option to opt into data sharing for a more customized experience.”

“The smarter the technology, the lazier consumers get,” he told TechNewsWorld. Customers might not be put off by privacy issues because “Amazon has great brand loyalty and excellent customer service.”

The indicator showing when data is streaming to the cloud “is a positive step to raise user awareness,” said Virsec’s Leichter. Older-generation Echos “pretty much always” record or transmit data and do not give any indication.

That said, Amazon needs to stream voice input to the cloud to leverage machine learning so that Alexa understand users’ requests, suggested Juniper’s Hahad. However, this raises privacy concerns for many people.

“Nobody knows how services will evolve in the future to use Alexa voice recordings,” he pointed out. “Would governments start spying on their people? Would our online browsing be peppered with ads based on a conversation we just had at home?”

The indicator “is a must-have feature for something that will go into bedrooms,” Enderle observed.

The Echo Show 5’s strengths are that it’s easy to use and it’s very inexpensive for a screen-based digital assistant, Enderle said.

Its weaknesses are the limitations of Alexa, which “still isn’t very smart,” as well as the need to manually delete records of calls daily, and the relatively lower sound quality than more expensive offerings, he noted. “The low price point means tradeoffs.”

Google’s Home Speaker line is not a threat, according to Enderle, because “Amazon continues to have the deepest line in the segment, particularly when you consider the TV products and third-party producers.”