Amazon CEO Jeff Bezos on Thursday announced a slew of new tablets in the company’s Kindle line that could give that device family new life.

Bezos also listed a number of new capabilities that will be available on the Kindle Fire family.

“They’ve done their homework in terms of learning from the major player in the world — Apple — and they’ve focused much more on the user experience and brought in a bunch of features for that,” Rhoda Alexander, a research director at IHS iSuppli, told TechNewsWorld.

The Sound and the Communications Fury

The new Kindle Fires will be the first tablets offering dual stereo speakers with Dolby Digital Plus audio. They will have front-facing HD cameras with a custom Skype app for video calling.

Downloads and streaming will be 40 percent faster than the next fastest tablet in the market because the Kindle Fire HDs can switch automatically between 2.4 GHz and 5 GHz WiFi networks automatically, Amazon said. Further, they have dual antennae and multiple-input Multiple-output (MIMO) technology.

MIMO is a method of using multiple radio antennae for WiFi communications The technology’s a key element of the 802.11n WiFi networking standard.

A New Approach to Screens

The Kindle Fire HDs’ screens are made by laminating the touch sensor and the LCD into one single layer of glass. This creates a display that’s easy to view even under overhead lights, and reduces glare by 25 percent compared to the latest-generation iPad, Amazon said.

In addition to using in-plane switching technology, Fire HD tablets use an Advanced True Wide polarizer. This technology, found in various TV sets, aims to prevent the glow you see when you view images on LCD screens at an angle and keep colors, especially black, stable.

More About the New Kindles

The Kindle Fire HDs come with Whispersync for Voice. This lets users sync their Kindle books with autobooks. 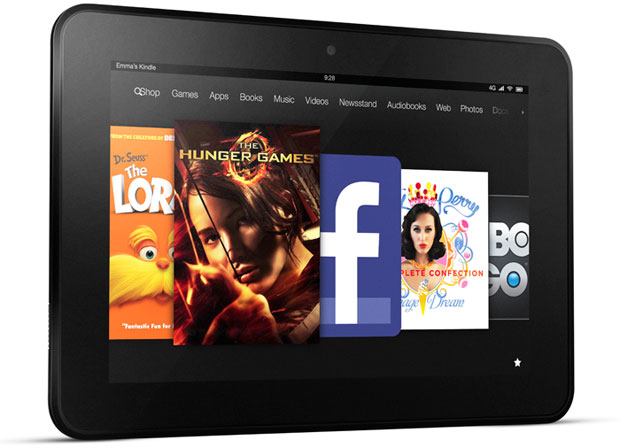 Other features include HD games, a gyroscope and accelerometer, and social gaming features.

“I think Amazon did a great job on this announcement,” Jeff Orr, a senior practice director at ABI Research, told TechNewsWorld. “They understand what’s driving the market — content service-led decisions followed by platform-led decisions. They understand who their competition is and what it’s bringing to the table, specifically Apple.”

Overall, Amazon “put together a competitive hardware solution paired with their strength, which is content aggregation and distribution, whether it’s apps, audio or video,” Orr said.