Last week, Apple passed Microsoft in market capitalization for a number of reasons. I agree with Gary Marshall, who argues in “Apple beats Microsoft? Not so fast, Fanboys” that the two companies aren’t even in the same race. I’d even add that the only reason Apple moved ahead in valuation is because we don’t count stock owned by employees, and Bill alone has around US$40 billion of that.

However, I also agree with much of what Geoffrey James says in “Top 10 Reasons Apple Beat Microsoft” — essentially, that Apple’s relative success really has more to do with decisions made at Microsoft than decisions made at Apple. Having said all of that, Microsoft is still the most profitable company in the segment, and as Jobs himself would point out, it is all about profit.

However the one saying I’ve made famous is that “perception is 100 percent of reality,” and the perception is that Apple did and continues to beat Microsoft. The executive Microsoft had positioned against Apple was Robbie Bach, who ran Microsoft’s entertainment and hardware division, a division that became a vampire division, and this got me thinking that Apple’s greatest strength may be its secret fifth column.

I’ll address all of that and close with my product of the week, which is a technology from Qualcomm that could obsolete both the iPad and the Kindle.

We frequently talk about Apple’s fan base, both as an asset and a liability, but one thing we don’t talk about is that it often seems Apple’s competitors go out of their way to fail. The first time I became aware of what looked like covert activity on Apple’s part was when I ran down the background on the HP iPod.

In the post mortem on that failed effort, it appeared clear that Steve Jobs initially knew more about this product than HP’s own CEO Carly Fiorina did, and Steve used the information to play her so that HP never entered the market with its own product and was effectively locked out until Apple had monopolized that market.

I watched what appeared to be a similar lead on the killed Dell MP3 player. Information got leaked, and Apple’s supporters turned perceptions of the product so negative that Dell never released it. There was no hard evidence of Apple’s direct involvement — but when taken on top of the HP event that Apple did directly manipulate, the apparent connection was hard to disregard.

In the case of Palm and the Palm Pre, the firm had largely been rebuilt with ex-Apple employees. The Palm Pre was received with iPhone-like raves, yet it was systematically attacked — not by Apple, but by Palm employees who crippled every aspect of it. Individually, each item seems random, but collectively and in hindsight, each looks as though it was planned.

From the moment the Palm Pre was released, the effort began imploding due to a series of mistakes that were textbook stupid.

Apple’s weakness was AT&T; the only carrier less liked was Sprint, and Palm inked an exclusive with Sprint.

Apple does a targeted review program: Only hand-picked high profile reporters and reviewers who constantly praise Apple products get them early (or at all). Palm gave Palm Pre phones to lots of folks early, but gave those same Apple supporters an earlier disclosure date, assuring initial mediocre reviews and pissing the hell out of everyone else. I’ve never before seen a situation in which an embargo is enforced after major publications publish on an announcement. (Most everyone else immediately broke their NDAs but were pissed anyway).

One or two mistakes, sure. But when a firm screws up everything — a firm made up of people from Apple who should have learned from Jobs the right way to do things — you begin to wonder if there was a plan, and whether Apple was behind it.

What Is a 5th Column?

The term “fifth column” was created in World War II, and it referred to a successful effort by Germany to place loyalists behind enemy lines to disrupt defenses during what became a series of very successful invasions. I first saw what appeared to be the use of this practice in Siemens while I was working there.

At the time, I was working for ROLM, a company that Siemens had purchased from IBM, in the competitive intelligence organization. This is the corporate equivalent of the CIA. One of my highly classified reports concerning our competitive weaknesses showed up at Kaiser Permanente, which was our largest Western account. The head of sales wanted me fired immediately for creating and leaking the report. I’d been arguing that, based on my research, our sales losses to Northern Telecom weren’t due to product or pricing failures but rather to intentional sales mistakes.

However, I was also — as luck would have it — in charge of security for our division, and I was a sneaky SOB. As a result, I could identify who had received each copy of the report I’d published, and the leaked report was traced back to a guy who worked — wait for it — directly for that same sales VP. We couldn’t prove it, but it looked like he had actually instigated the leak. He later left the company and became head of a targeted group at Northern Telecom focused on stealing ROLM accounts.

It seemed, in hindsight, that this was a job he had held while working for us as well, and he had effectively been a very powerful competitive insurgent in our midst. In short, he appeared to be part of Northern Telecom’s fifth column and likely not the only one.

Microsoft’s model is based on the specialization change that was first emphasized in the Industrial Revolution. Once in place, assuming everyone does their jobs, the older vertical integration model is too inefficient to compete effectively — yet Apple clearly did.

The division supposedly positioned against Apple was the entertainment and hardware division, but it became Apple’s (and Google’s) ally inside of Microsoft — their fifth column, so to speak. Let me explain.

Xbox initially was a hedge against a threat from Sony that never actually emerged. It siphoned away gaming resources from Windows, pissed off the OEMS (it is seen as basically a Microsoft PC by them) and effectively eliminated the high end of the Windows PC market. Apple now has about 90 percent of the high-end PC market. The effort should have been to obsolete the gaming console concept, not build a better PlayStation. In the ’80s, Microsoft didn’t try to build a better Mac — it worked to make the vertical integration concept under the Mac, mainframe and Commodore obsolete. Apple is attacking the concept of horizontal specialization, not just Windows, and it is winning — with Microsoft’s help.

Zune killed off PlaysForSure — the application of Microsoft’s successful horizontal model in the iPod space. After massive spending, it occupies a small fraction of the market today and serves only to allow Apple to argue that it isn’t really a monopoly. Zune actually helps Apple more than hurts it, as it faces its own antitrust issues.

Media Center and Media Extenders were failures, but they opened the door for Google TV and the announced partnerships between Intel, Sony and others to spread Google’s platform where Windows technology might otherwise exist. They plowed the field but let Google plant the seeds. (While this sounds like a discord on the theme, realize that Apple moved on this opportunity first with Apple TV but failed to execute.)

While Kin phones haven’t yet killed off the Windows Phone platform, they did confuse the effort. (Google tried something similar with the now killed Nexus One, which made me wonder if Apple has folks in Google’s camp.) This, coupled with the apparent lack of business tools in Windows Phone 7, removed one of Microsoft’s sustaining advantages over Apple, and Microsoft continued to bleed partners. The collective phone moves likely contributed significantly to the decision by HP to buy Palm and step away from Microsoft on emerging platforms.

Had I not actually seen Apple and others do the fifth column thing before, I’d probably think — as you may — that this is all so much interesting fiction. The odds favor the fiction explanation, but I wonder if there could be intelligent intent behind the apparent foolishness.

In total, that’s an impressive number of accidents, which suggests to me they might not be accidents. What do you think? Is Jobs that good? Steve Ballmer has stepped in personally, and as Windows 7’s success would indicate, he can do impressive work when focused — but does Steve Jobs have other folks in Microsoft working to ensure Ballmer fails?

In closing, I’ve often thought that companies could use an executive in charge of the “don’t do stupid stuff” department whose job is — wait for it — to make sure firms don’t do stupid stuff. At Microsoft, maybe part of that job would be to get rid of folks Steve Jobs or Eric Schmidt should be paying.

I was at the SID conference last week, a display-focused event. I saw some really interesting stuff, like a Microvision pico projector tied to a gaming rifle that could put the game on any wall you were aiming at.

Also on display was the technology that has the greatest chance of changing the Kindle/iPad dynamic (the Kindle is great at reading and sucks at everything else, and the iPad sucks at reading): the Qualcomm Mirasol display. 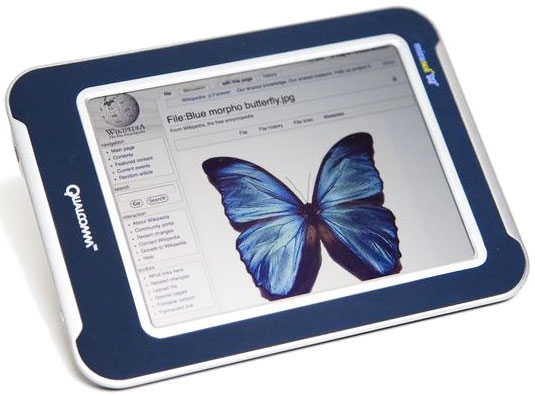 Mirasol offers high-contrast, outdoor-viewable text that’s easy on the eyes, like the Kindle’s e-paper. Also, it can display multimedia like a regular flat panel, similar to what an iPad can do. It’s rumored that the next-generation Kindle will have a display with this or similar capability. It looks very sharp in person, and it has a number of touch and lighting options, so you can use it when it’s pitch black out.

As one of the folks at the event pointed out, the iPad sucks when you have a lot of ambient light, and the amount of light it shines in your eyes makes it tiring to use as a reader.

It would be nice to be able to do more with the Kindle than just read. Technologies like the Mirasol display will likely define the next generation of e-book readers and iPad-like devices and, as such, it is perfect for my product of the week.