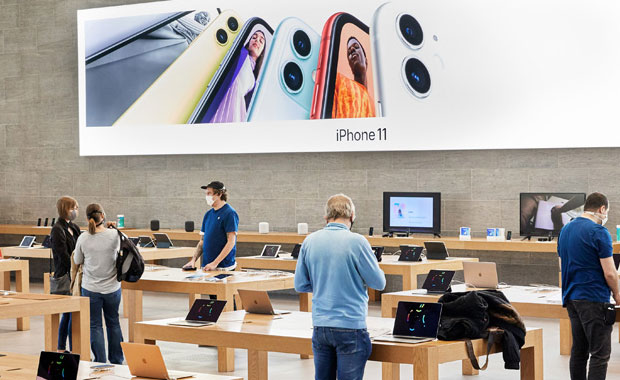 Apple on Sunday said it has reopened nearly 100 of its retail outlets around the world.

The company will be opening an additional 25 stores in the United States and 12 more in Canada this week, according to a Bloomberg report.

Apple previously had closed all its retail stores due to the spread of COVID-19.

“Our commitment is to only move forward with a reopening once we’re confident we can safely return to serving customers from our stores,” Apple Senior Vice President of Retail Deirdre O’Brien wrote in an open letter to company’s customers.

“We look at every available piece of data — including local cases, near and long-term trends, and guidance from national and local health officials,” she continued. “These are not decisions we rush into — and a store opening in no way means that we won’t take the preventative step of closing it again should local conditions warrant.”

Apple has instituted measures to make their stores safe for employees and customers, O’Brien noted, including the following:

“The response to COVID-19 is still ongoing, and we recognize that the road back will have its twists and turns. But whatever challenges lie ahead, COVID-19 has only reinforced our faith in people — in our teams, in our customers, in our communities,” O’Brien wrote.

“Down the road, when we reflect on COVID-19,” she continued, “we should always remember how so many people around the world put the well-being of others at the center of their daily lives.”

Apple’s approach to reopening its stores received praise from some quarters.

“It’s hard to find any fault with the plan,” he told TechNewsWorld.

However, the pace of Apple’s reopening is surprising, observed Sucharita Kodali, analyst at Forrester Research, a market research company headquartered in Cambridge, Massachusetts.

“Frankly, I’m surprised they didn’t open when all their malls reopened,” she told TechNewsWorld.

“They were one of the first to close, if you recall, even though malls have ‘continuous operating clauses’ for their tenants. This was even before local ordinances forced stay-at-home orders,” Kodali pointed out.

“Other brands, like Louis Vuitton and Saks, have reopened very safely, and I expect Apple will do the same,” she added.

“Since testing remains inadequate and there’s no vaccine until at least 2021 — if then — they’re taking a very careful, thoughtful approach,” he told TechNewsWorld.

While Apple is being careful, it’s in the same boat as any retailer opening up for business during the COVID-19 crisis, noted Rob Enderle, principal analyst at the Enderle Group, an advisory services firm in Bend, Oregon.

“With a pandemic, where you don’t know who is infected and who isn’t, any resumption of business comes with risk,” he told TechNewsWorld.

Those risks should be reduced by the safety measures the company has adopted, noted Tim Bajarin, president of Creative Strategies, a technology advisory firm inCampbell, California.

“The guidelines are very proactive and should do the job of keeping Apple’s staff and customers safe,” he told TechNewsWorld.

“By proactively checking shoppers’ temperatures before they enter and requiring both workers and customers to be masked at all times, Apple should be able to minimize risk to both consumers and employees,” King added.

Given the uncertainty about how COVID-19 is transmitted, Apple is being diligent, Sterling said.

“They’re doing all the things that one would expect — limiting capacity, requiring face masks — and giving consumers multiple options, including curbside pickup,” he observed.

“They seem to be doing the same things as grocers and other essential retailers, and people seem perfectly fine going to those locations,” she said.

Because of its powerful brand, Apple’s approach to reopening its stores could influence other retailers.

“Apple has always been one of the companies that others look to for best practices and, as in the past, will set an example for other companies to follow,” Bajarin said.

“Apple is a retail leader and will be a model for others to varying degrees,” Sterling noted. “Best Buy is doing similar things.”

Apple is a bellwether that’s watched by other retailers, Enderle remarked. It’s also averse to litigation, which may be another reason some retailers will be watching the company closely.

“A lot of retailers don’t understand the litigation risk should someone come into their store and catch the virus,” he pointed out. “Apple will make every effort to make sure it isn’t one of those retailers. That implies that Apple will be safer than most other retailers.”

Rebel Without a Mask

While Apple may feel its safety measures are needed to keep its customers and employees safe, not everyone may agree.

“This is like bringing up politics at the family’s Thanksgiving dinner,” observed Michael Arrigo, a HIPAA expert witness with No World Borders.

“There are very polarized opinions about this,” he told TechNewsWorld. “Sometimes there’s violence when people are told to wear masks.”

Forcing people to wear masks could irritate some folks, Kovali acknowledged, but added, “people who would not comply probably don’t index as strongly with being Apple customers, anyway.”

The situation is made worse for retailers by the signals people are getting from the nation’s capital, Enderle suggested.

“With the mixed guidance from the administration, it makes things unusually dangerous for retailers,” he said, “because as they try to enforce the rules, it sounds like they’re speaking out against the president.”