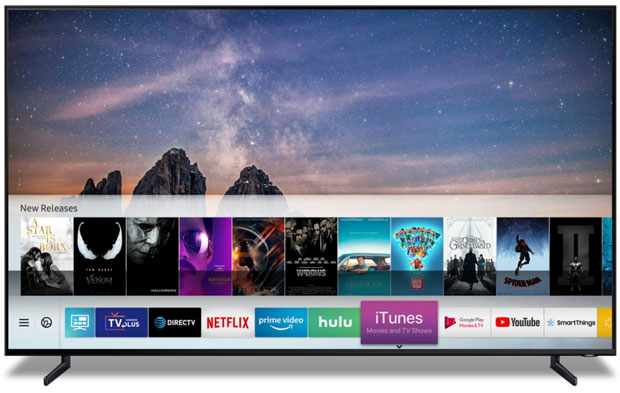 Apple movies and music are coming to Samsung Smart TVs this spring.

Smart TVs made in 2018 also will be able to play Apple content via a firmware update.

Apple content can be accessed from the smart TVs via an exclusive app. Samsung customers will be able to use it to access their existing iTunes library, as well as browse the iTunes Store to buy or rent from a selection of hundreds of thousands of movies and TV episodes.

With AirPlay 2 support, Samsung customers will be able to use Apple devices to play videos, photos, music, podcasts and more for viewing on Samsung Smart TVs, including QLED 4K and 8K TVs, the Frame and Serif lifestyle TVs, and other Samsung UHD and HD models.

“The app is an interesting development, because it means Apple is opening access to its content ecosystem,” said Paul Gagnon, director of technology analysis and research at IHS Markit, a research and advisory firm headquartered in London.

That will be important if Apple wants to compete with the big shots in the streaming market.

“With all the investment Apple is doing in content creation and trying to be more like Netflix or Amazon, they need extra eyeballs,” Gagnon told TechNewsWorld.

“They need to drive up subscriptions and purchases, and the only way to do that is to expand your user base,” he continued. “There are only so many people purchasing Apple TV set top boxes. If you open that up to smart TV manufacturers, you can pretty quickly double or triple that user base.”

Apple’s services business brings in about US$10 billion a quarter. Up to now, those revenues have been coming mostly from Apple hardware.

“With Samsung, LG and Vizio now supporting Apple’s current streaming service, it allows Apple to expand their customer base and in turn, could bring millions of new customers into Apple’s world of services,” noted Tim Bajarin, president of Creative Strategies, a technology advisory firm in Campbell, California.

“These new partners make it possible for Apple to be even more aggressive in creating original content and expanding their range of video and music offerings in the future,” he told TechNewsWorld.

The timing of the Samsung and Apple announcement is also interesting, coming less than a week after Apple aired some bad news about its expected first quarter revenues, suggested Ross Rubin, principal analyst at Reticle Research, a consumer technology advisory firm.

Apple lowered its expectations for first quarter revenues to $84 billion from its previously projected range of $89 billion to $93 billion. Apple attributed the decline to a number of factors, including a weakening Chinese economy and fewer-than-expected iPhone upgrades worldwide.

“The warning signals a lapse in Apple’s core hardware business, and now we see its boldest move to date in terms of distribution for its streaming content business,” Rubin told TechNewsWorld.

“Samsung is the largest-volume TV company,” he continued. “If you’re offering a content service and you want to be integrated with a TV set, it makes sense to start with the biggest volume provider,” he added. “It shows Apple’s intent to have broad distribution of their service far beyond Apple TV.”

In addition to broadening Apple’s customer base, the Samsung deal will give Apple some bargaining chips as it seeks to build out its streaming content offering.

“They are reportedly looking into launching a streaming video on demand service,” he told TechNewsWorld.

“The assumption is the service hasn’t launched yet because Apple hasn’t been able to obtain the rights to all of the content they deem necessary for a successful and competitive service,” he noted. “By reaching more devices, it should give Apple more bargaining power.”

“This partnership helps Apple be more competitive with Netflix and Roku, and over time, Apple could eat into their customer base,” Creative Strategies’ Bajarin said.

However, Apple is less of a concern to Netflix than Disney and Warner, suggested Reticle’s Rubin, which are poised to enter the original content streaming market.

Meanwhile, Roku actually could be a good partner for Apple he noted . “It would give Apple an avenue into TVs that use Roku’s embedded solution.”

By increasing its market presence, Apple is giving consumers “more choices for where they can have Apple streaming services. Choice is always good for the consumer,” Bajarin said.

“Content in more places with less walls is typically a win for consumers, and in this case it certainly is a value-add,” said ABI’s Inouye.

More choices can add complexity to the market, which can lead to confusion, he acknowledged. However, “ultimately, if consumers can view their content on more devices they benefit in the end.”

“It’s going to come down to a service creating a critical mass of must-watch programming, so if consumers have to prioritize, they’ll say this is one I want,” he explained.

The TV deal seems smart for both companies.

“Samsung does not have their own streaming services, and they already offer Netflix, Hulu and others in their TVs, so this makes good business sense for Apple and Samsung,” Bajarin said.

“Both Samsung and Apple mutually benefit with Apple expanding their reach of connected devices for content, and Samsung adding another streaming service,” Inouye added.

“It also allows consumers with iTunes libraries to stick with their connected Samsung TV for all their over-the-top needs,” he pointed out, “rather than purchasing a separate device like an Apple TV.”