Apple to Focus on Productivity With Next macOS, iOS Releases 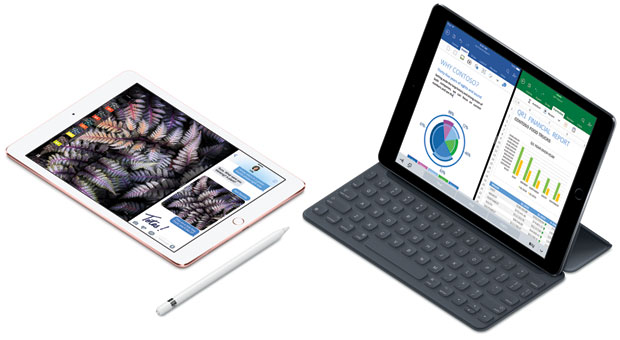 The ramp-up to Apple’s Worldwide Developers’ Conference this June has begun, with reports circulating about the goodies the company will include in the next generation of its desktop and mobile operating systems. The latest revelations include macOS support for the iPad as an auxiliary display, and iOS support for multiple windows within apps.

There are a number of third-party products on the market to add an iPad as a second display for a Mac, but the feature will become native to Apple’s desktops and laptops with the next version of macOS, version 10.15, according to 9to5Mac.

The feature, referred to internally as “sidecar,” reportedly can be accessed by hovering a Mac’s cursor over the green button to maximize a window in macOS. Hovering will reveal a menu with options for making the window fullscreen, tiling it, or moving it to an external display or an iPad, where it will appear in fullscreen mode.

“For those of us who travel, it’s quite annoying to have just one small screen,” she told TechNewsWorld. “Even with a 13-inch iPad, it’s hard to achieve total productivity with that machine.”

While the iPad is connected to a Mac, Apple Pencil can be used with the tablet, making the iPad a stand-in for a tablet accessory, 9to5Mac also noted.

An array of new features will appear in the next edition of Apple’s mobile operating system, iOS 13.

iPad applications will be able to function in multiple windows opened simultaneously, 9to5Mac reported. Each window can contain “sheets.” At first, the sheets are attached to a portion of the screen, but they can be detached with a drag gesture and moved around the screen like cards.

They also can be dragged onto each other to form a “deck.” To get rid of a card , the user can virtually fling it away.

Both the iPad and iPhone will get a “dark mode,” which already is supported by macOS. The system-wide dark mode can be enabled through iOS settings. It includes a high-contrast option.

A new undo and redo gesture will be part of the new iOS repertoire, 9to5Mac noted. When a user enters text on the iPad, a three-finger tap on the keyboard area will activate the feature. Moving left or right will undo and redo actions interactively.

The first time the keyboard is displayed after installing the new version of iOS, a tutorial will appear explaining the new feature, which is probably a good idea given the recent track record of iOS.

“One of the complaints about iOS 12 was, while it had a lot of new features, they weren’t always the most intuitive,” Guenveur said.

Mail in the new iOS also will be better, 9to5Mac reported. For example, users will be able to organize messages into categories — marketing, purchases, travel and such — which will be searchable. A “read later” bin also will be available.

Collaboration in third-party, document-based apps may be introduced in the new iOS.

In addition, Safari for iOS 13 has been tweaked so that on the iPad, it automatically will ask for the desktop version of websites. Some websites, most notably YouTube, will send an iPhone version of a site to an iPad, even though the tablet can handle a desktop rendering of a site.

The reported new features of iOS 13 aim to make the iPad a better tablet, as well as a better computer, said Patrick Moorhead, principal analyst at Moor Insights and Strategy, a technology analyst and advisory firm in Austin, Texas.

“They indicate to me Apple is wanting to make the iPad more of a personal computer,” he told TechNewsWorld.

The new features will appeal to anyone who values improving their productivity, Moorhead added.

“At least for the iPad Pro, Apple is always going to push the productivity story,” IDC’s Guenveur said.

One of the reasons Apple introduced the iPad Air — which has a larger screen than the basic iPad and a faster processor — was to encourage movement to its higher-end tablets, she pointed out.

“By placing something between an iPad Pro and an iPad, it has something that’s for content consumption but can also be seen as a productive machine,” Guenveur explained.

As powerful as Apple has made its Pro version of the iPad, though, for many people it still seems to lack the productivity allure of a laptop.

“What really hampers the iPad Pro — although they added a host of features with iOS 12 — was that iOS is still a very mobile operating system,” Guenveur said. “For some folks, even though it is powerful device, iOS 12 just didn’t provide the support needed for it to be a full productivity machine.”

One of the reasons Microsoft’s Surface Pro tablet has a productivity edge over the iPad Pro is Windows, she said. “Where the Surface Pro shines is Windows 10, which is a fully fledged operating system with a desktop.”

For Apple, the answer to the productivity challenge may lie in macOS.

“I think they’re going to continue to tweak iOS and add macOS features to it,” Guenveur said. “If you compare the iPad Pro to some of the laptops that Apple released last year, the iPad Pro was far more powerful, so it makes sense to focus on iOS and bring in useful features from macOS.”