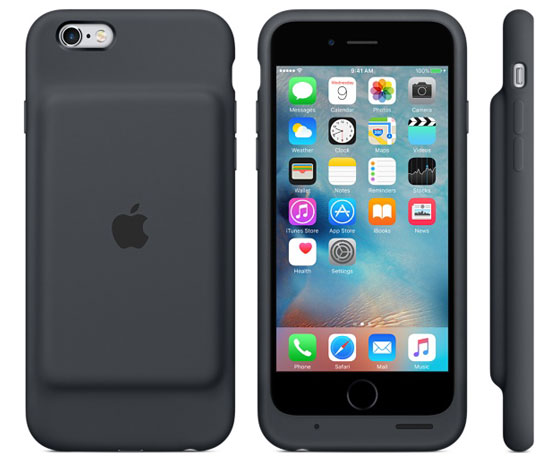 Apple on Tuesday unveiled its own battery case for the iPhone 6s.

Offered in white and charcoal gray, it has a silicone exterior and a microfiber lining. In addition to offering protection, it increases iPhone usage times.

The intelligent battery status is displayed on the iPhone Lock screen and in Notification Center.

Priced at US$99, the case supports Lightning accessories, so users can transfer data while the iPhone is in it.

The Price Is Not Right

“It is expensive,” observed Susan Schreiner, an analyst at C4 trends.

“From a purely technical standpoint, the Smart Battery Case doesn’t offer as much extra battery life as competitors do,” remarked Lauren Goode in her review for The Verge. “So in order to justify its $99 price point, it has to be ‘smart’ in other ways. It has to build upon existing Apple designs, and it has to utilize the iPhone’s software. It does all of this — but I’m not convinced this is the best case.”

Get Mophie’s $60 Juice Pack Reserve for the iPhone 6 and 6s “if you’re looking for something pocketable and cheap,” suggested Chris Velazco, writing for Engadget.

There are many third-party iPhone 6s battery cases available, some selling for as little as $25.

Some third-party cases have batteries in the 3,000 mAh range, while Apple’s case has a 1,900 mAh battery, which means it provides less battery life than some competitors.

“Apple’s a high-margin company, so you could argue everything they sell is overpriced,” noted Rob Enderle, principal at the Enderle Group. “That’s part of their allure; they appeal to folks who like to think they don’t care about price.”

“It’s not a look-at-the-way-the-lens-extends-from-the-body bump, it’s a my-iPhone-ate-my-iPod bump,” quipped The Verge’s Goode.

However, there are things she praised: the soft pass-through buttons for volume and power; cut-outs for the ring/silent button and rear camera lens; an acoustic port for the speaker; and the flexible top part of the case, which makes it easier to slide an iPhone in and out.

The case “is butt ugly for an Apple product,” Enderle remarked. The white case will, like other white cases, “likely yellow over time and show dirt — and it looks like the iPhone ate a flip phone.”

Apple’s case “is nicely practical, but it makes your beautiful new iPhone look like something that was rushed out of China,” he told TechNewsWorld. “I can’t remember the last time Apple brought out a product that didn’t emphasize the design.”

Paying a premium for a well-designed product and then buying an accessory that falls down in the design department “is like buying a Porsche then strapping on external gas tanks and covering the whole thing with taped-on bubble wrap,” Enderle observed.

Most battery cases act as a power reserve, so the smartphone draws power from them only when its own battery is out of juice, but the Apple iPhone 6s case does the opposite — the phone draws from it first and uses its own battery as a reserve.

“I think it would be a surprise to users initially,” C4 Trends’ Schreiner told TechNewsWorld, “but people would adjust to something like that.”

Still, “people aren’t used to that with Apple — they’re used to things just working and not being complicated — they don’t have to read instructions,” she pointed out. “Apple products are the ultimate plug and play.”

While that might pose a problem at first, external batteries “keep the phone battery topped off until they lose charge, [which] tends to cycle the phone battery very quickly and can reduce its useful life significantly, something we don’t talk about,” Enderle said.

“This [case] battery actually talks to the phone, which may mean it bypasses the phone’s battery,” he said, “and if it does that, it could significantly increase the iPhone battery’s useful life.”