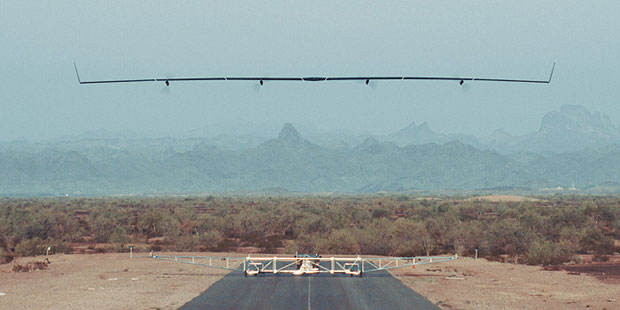 The company had flown a one-fifth scale version of the airplane for several months.

The full-sized craft has the wingspan of a Boeing 737 — 46 yards — but reportedly weighs less than 900 pounds fully laden, thanks to the carbon fiber materials used in its construction.

The goal of last week’s test flight was to verify Facebook’s operational models and the overall aircraft design.

The flight originally was scheduled to run 30 minutes, but its successful performance allowed engineers to extend it to a 90-minute run. The ground crew was able to verify several performance models and components, including aerodynamics, batteries, control systems and crew training.

“In our next tests, we will fly Aquila faster, higher and longer, eventually taking it above 60,000 feet,” said Jay Parikh, global head of engineering and infrastructure at Facebook.

When complete, Aquila will be able to circle a region up to 60 miles in diameter at a height of more than 60,000 feet.

It will use laser communications and millimeter wave systems to provide connectivity.

Facebook Connectivity Lab researchers have proposed using an optical detector coated with fluorescent materials for free-space optical communications. They demonstrated a detector that achieved data rates of up to 2.1 Gbps.

The company’s plan is for the Aquila drones to fly over remote regions and deliver connectivity for up to three months at a time.

“This will require significant advancements in science and engineering to achieve,” Parikh noted, adding that the current world record for a solar-powered unmanned flight is two weeks.

Facebook will have to work closely with operators, governments and other partners to implement the program.

The company reportedly wants to have a fleet of about 10,000 Aquila aircraft flying to areas where and when they are needed.

The drones will fly at heights of more than 60,000 feet in order to avoid commercial aircraft, according to Facebook, but “military planes — especially spy planes — fly higher, and they don’t have traffic controllers either,” he told TechNewsWorld.

Further, with a fleet of 10,000 planes, “a one-in-a-thousand chance of failure would give us 10 failures, on average,” Enderle estimated.

Command and control for 10,000 craft would be a problem, said Michael Jude, a program manager at Stratecast/Frost & Sullivan.

“To put this in perspective, 10,000 drones are more than all the militaries of the world are currently flying,” he told TechNewsWorld.

The Economics of the Plan

Some of the economic aspects of Facebook’s plan also raise questions.

Considerable engineering and scientific work needs to be done, as Parikh acknowledged, which means Facebook likely will have to invest millions of dollars in getting Aquila to the point where it can remain in the air reliably for three months at a time.

It also will have to spend lots of time and money negotiating with governments, regulatory authorities and commercial partners, and it will have to obtain all the necessary permits.

“I’m still trying to figure out how they will convince governments these aren’t really spy planes or flying ballistic deathtraps,” Enderle said.

Not all countries have been on board with Facebook’s Internet access plans up to now. India and Egypt banned Free Basic, the low-cost Facebook service that Aquila airplanes will enable.

Whether Facebook can recover the costs from its target customer base — largely people with little discretionary income — remains in doubt.

“This does seem improbable,” said Frost’s Jude. “This is one of those ideas that sounds interesting on the surface but becomes less compelling the closer you look.”