Baxter the Robot Works for $22k, No Bathroom Breaks Required

A company by the name of Rethink Robotics appears to be one step closer to fulfilling a long-held dream of people in the robotics industry — it has unveiled an apparently easy-to-use robot that can learn and adapt to new circumstances. 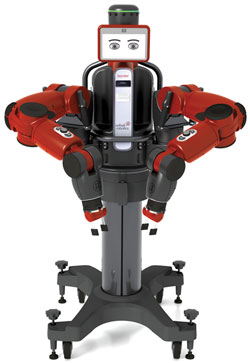 The robot, Baxter, has the usual oversized robot arms, but its “head” is a screen with a placid face. Think of a much nicer version of Cain, the bad-guy-made-robot in Robocop 2.

Baxter is equipped with sensors and software to help it comprehend its environment. It has also been programmed to apply “common sense” while at work.

The robot comes ready to work out of the box, and can be trained either by moving its arms or through a graphical user interface. Trainers don’t need any special expertise.

“Improving the ability to program complex tasks with robots not only by experts but by non-experts is potentially groundbreaking, since a large portion of getting a robot system to do useful tasks in industry often costs on the same order as the hardware,” robotics expert Mark Yim, a professor in the University of Pennsylvania’s mechanical engineering and applied mechanics department, told TechNewsWorld.

Baxter understands and can adapt to changes in its environment. For example, if it drops an object, it will get another before continuing with its task, Rethink Robotics said.

Sensors and related software in the robot, together with its ability to apply common sense, are claimed to let it work next to people without it having to be separated for fear it might run wild.

Baxter is highly trainable, and typical factory workers can apparently train it directly to perform a task in less than 30 minutes.

Baxter is a complete and self-contained system and can be ready to use on the factory floor in less than one hour. It’s aimed at midsized and small manufacturers, and is listed at $22,000.

However, such work “calls for a certain amount of intelligence, which is why humans were used in the first place,” Enderle told TechNewsWorld. “The problem is, you must be able to discern good from bad.”

Baxter “seems to have addressed this problem, and that’s a pretty big advancement,” Enderle remarked.

Humanoid robots that are programmed to carry out various tasks are nothing new.

The Japanese government has a project under way since 1998 to develop anthropomorphic robots to help aging humans and render assistance in natural disasters.

This aims to offer robots working in housing and building construction, the operation of industrial vehicles, and building and home management, in addition to performing personal care services.

Honda rolled out two humanoid Asimo robots to serve visitors to its headquarters back in 2007, while Sony developed the QRIO walking, dancing robot.

Fujisoft offers its Palro robotic humanoid, which can converse with humans spontaneously.

Here in the United States, GeckoSystems turns out products that include a personal robot that provides elder care and a medical care robot. The latter supplements nurses’ services. It can change bedpans, give patients their medication and monitor vital signs.