Apple is one of the most popular and powerful companies in the United States, and last week it became the most valuable as well. That news brought back some personal memories of my time at IBM, when it was the most powerful and valuable technology company in the world. For a long time, it seemed virtually untouchable.

However, IBM went off the rails in the late 1980s, and by the early 1990s the stock had collapsed, the CEO had been fired, and the company had announced massive, historic layoffs.

The IBM brand went negative, and Louis Gerstner and Jerry York (who also used to be on Apple’s board) were brought in to save the company.

I was employed at IBM during that upheaval and the word “traumatic” doesn’t begin to describe the effect it had on the workforce. I’ve often thought that the people who were laid off (I wasn’t) were the lucky ones — that’s how traumatic it was.

It wasn’t just the employees who suffered. Customers, investors and their families all were put at risk. People loved the story of IBM’s success so much that they avoided looking at its problems.

To me, Apple looks like an IBM-like disaster in the making.

I’ll explain and then close with my product of the week: an electronic license plate from Revivor.

I had a number of relatively unique jobs at IBM, largely because of some market research I did to identify serious problems with a major part of IBM’s sales channel. It put me into the executive resource program and gave me access to a lot of things I otherwise wouldn’t have been allowed to see.

After the crash, part of my personal therapy was to overuse IBM’s open-door policy to research why the company nearly had failed. I wrote an internal paper on it and submitted it shortly before I left IBM to go to work for Dataquest, a market research firm (later acquired by the Gartner Group).

What I found was that the problems at IBM were being ignored or actively covered up, both internally and externally. IBM had stopped innovating, and because its customers couldn’t move — something we now call a “lock in” policy — IBM increased revenue by raising price.

That made it look as though IBM was doing very well, but it wasn’t. Customers were getting more and more frustrated that they were paying more for pretty much the same stuff. IBM also worked hard to cut costs from suppliers and used its power both on suppliers and on the sales channel to shift profits from them to IBM, which raised IBM’s profitability but significantly weakened IBM’s supply and sales. (Raises to employees were few and far between as well.)

IBM tried to diversify into telephony by buying ROLM Systems, much like AT&T tried to do with NCR, but both of those efforts failed. The lesson is that if you can’t innovate in the industry you know, you likely won’t have the skills to execute successfully in an industry you don’t know.

For a while, IBM looked great on paper although there was a rather obvious cancer underneath — but everyone and their brother did their level best to pretend it didn’t exist.

By the way, the trauma I experienced makes me hate lock-in strategies — which I think are company killers — like the plague. Who else has a lock-in strategy? Apple.

Consider Apple’s recent financials. Year-over-year results may be impressive, but if you go to the last page and look at quarter-over-quarter results, you’ll see that Apple has fallen in every geography that it tracks. Every geography.

Now ask yourself, if Apple was stronger last quarter than this quarter, whey wouldn’t last quarter have been the trillion-dollar quarter? In fact, why isn’t anyone even looking at these quarter-over-quarter numbers? Let’s set aside whether Apple should be the most valuable company in the U.S. for a moment and just ask whether today’s Apple should be more valuable than Apple of just three months ago.

Now, looking at quarter-over-quarter in products, Apple is down 21 percent in total iPhone revenue and units. It is up 27 percent in units but only 15 percent in revenue (suggesting Apple had to cut prices to grow sales because the products were overpriced).

The company is down 9 percent in revenue and units in the Mac, and down 5 percent in things like the HomePod and Apple Watch (which are still too immaterial to be individually listed).

It’s been apparent for some time that Apple has been pounding on suppliers to lower costs. The most visible action was with Qualcomm. Currently there are something like 13 injunctive cases in place, the majority to be decided initially this year. China and Germany are the most likely to support Qualcomm, which effectively could block the sale of most of Apple’s Intel-based iPhones — which, by then could be all of them.

In short, just like IBM in the 1980s, Apple is making money mostly by increasing prices (even the services revenue increase may be attributed in large part to mining existing customers, not growing new ones). Further, the massive litigation against Qualcomm is focused not only on cutting costs but also to moving to Intel modems, which are substantially inferior to Qualcomm (Intel basically only sells to Apple).

Apple hasn’t had a hit product since Steve Jobs passed more than half a decade ago. Apple just dropped to third in the smartphone market (and is trending down), which also suggests it was more valuable, not less, last quarter.

Samsung has started an aggressive campaign to point out that iPhone buyers have been getting screwed. (Comparisons of Intel vs. Qualcomm modems suggest more and more iPhone users will be paying a premium for underperforming phones).

Oh, and like IBM looking at telephony, Apple apparently has been looking at automobiles as a place for growth. I’d argue that Apple knows about as much about building cars as the old IBM knew about telephones. Should Apple buy Tesla, it will end really, really badly.

I think Apple is where IBM was in the 1980s. It largely has stopped innovating, it has been overaggressive in cutting costs, resulting in lower-quality products, and it has been raising prices and mining customers to raise revenues, which likely will end just as badly as it did for IBM.

Collectively, Apple observers have not been looking actively at things like quarter-over-quarter performance or pending litigation, likely due to the desire to get the company over the trillion-dollar-valuation mark.

I doubt this will end any better for Apple than it did for IBM. A trigger event — perhaps the success of one of the 13 pending injunctions or, more likely, a ramped-up Samsung anti-Apple campaign — could result in a massive correction.

I don’t envy the Apple employees, investors or customers who will have to go through this. I’m just glad that this time it won’t be me.

I’m not embarrassed to say I’m a car guy. All but one of my cars is heavily customized with wraps, engine mods, interior upgrades, unique electronics (like military grade infrared cameras), custom paint and window treatments.

I hate license plates because they pretty much screw up the look of any car I have. This is why I am particularly fascinated by the new digital license plate being introduced by Revivor Auto, a firm based in California. 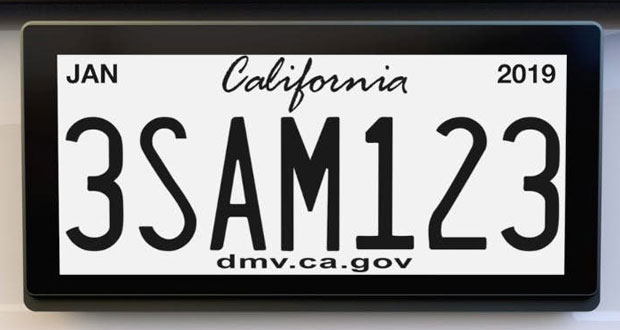 Reviver Auto’s Rplate Pro Digital Display
The plate uses E-paper so it pulls very little current. It can send an alert if your car is stolen or if you are in distress, and it makes putting on those damn annual stickers a thing of the past. (On my cars you have to take off the plate to do this right and it is a total PITA). You can change from white to black (no colors yet, but I expect they will be coming).

Because it is electronic and broadcasts the license number, you need only one of these. You shouldn’t need one in both the front and back of your car (the front plate is the one I really think screws up how a car looks). In addition, you could design it as part of the car in the future, in a way that would detract far less from the rear of the car as well.

Sadly, it isn’t yet approved in Oregon, where I live — otherwise, I’d have them on every one of my sports cars. Still, because it does solve a problem I find incredibly annoying, the Revivor Auto digital license plate is my product of the week.