Research In Motion (RIM) has announced the BlackBerry Storm2 together with European carrier Vodafone. 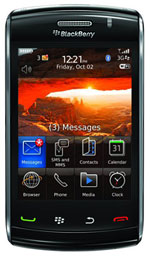 The Research In Motion BlackBerry Storm 2
(click image to enlarge)

However, the company has not said when or if the device will be available in the United States, nor has it said which U.S. wireless carrier it may go with.

European carrier Vodafone will offer the Storm2 in the UK, Ireland, Germany, Spain, the Netherlands, France and Italy, as well as in South Africa, in time for the holiday shopping season.

It’s not yet clear when or if the device will hit American shores or which carrier will offer it; Verizon was the first U.S. carrier to offer the BlackBerry Storm, and it may have first dibs on the sequel as well.

“The obvious carrier for the Storm2 is Verizon,” Carl Howe, director of anywhere research at the Yankee Group, told TechNewsWorld. “They’ll announce it when they feel they have had their stores ready and their salespeople trained up on it and not before.”

RIM did not respond to requests for comment by press time.

The Storm2 has “hundreds” of hardware and software enhancements, according to RIM.

One is RIM’s new SurePress technology, which provides users with tactile feedback when they press the touchscreen. It responds equally to pressure applied anywhere on the touchscreen, and it makes typing with the virtual keyboard easier than before, RIM claims.

Its talk and standby time depend to some degree on the technology of the network it’s using. For example, the Storm2 provides 5.5 hours of talk time on CDMA networks and 280 hours of standby time, according to RIM. The figures for UMTS and GSM networks are different.

The Storm2 runs BlackBerry OS 5. It weighs 160 gm and has a 3.2 MP camera with flash, autofocus, image stabilization and 2x digital zoom. It also has a built-in video recording feature. The Storm2 supports the 802.11 b/g WiFi standard.

Phone features include background noise suppression technology; a distortion-free speaker phone; and a proximity sensor which blanks the screen while the user is on the phone.

The Storm2 includes BlackBerry Desktop Manager for both PCs and Macs, and BlackBerry Media Sync for syncing with both iTunes and Windows Media Player. It supports Bluetooth 2.1, has a built-in GPS and offers photo geotagging.

When it was released last year, the original BlackBerry Storm was met with a few notably harsh reviews. So far, the Storm2 has also seen a mixed reaction. Some reviewers have praised the improved screen and the addition of WiFi, improved call quality and the browser’s speed. Others have said the SurePress interface is an improvement over the previous one, but it still does not compare with what’s available on other touchscreen phones.

One of the more positive views came from JBB Research principal analyst and CEO Julien Blin. “The mobile browser was clearly an issue in the first Storm,” he told TechNewsWorld. “It looks like RIM is addressing the issue, as they recently acquired a browser company called ‘Torch Mobile.'”

The Storm2 also offers longer battery life than its predecessor, Blin said. “RIM also added WiFi and redesigned the touchscreen user interface, which is another significant improvement, as many users were frustrated when typing on the Storm 1,” he added.

Many observers noted RIM’s relatively low-key approach to the Storm2 launch, compared with the whirlwind of activity surrounding the launch of its predecessor.

That caution is perhaps the result of the disappointing launch of the original BlackBerry Storm last year. “Having been burned by a bad experience the first time around, I suspect they want to guarantee a good launch this year,” the Yankee Group’s Howe explained.

RIM needs a good launch, as it’s scrambling to keep its lead over the iPhone in the enterprise and to fight off the competition from new smartphones running Android, several of which which are hitting the shelves for the holiday season.

“The Storm2 will appeal mainly to the Blackberry faithful who want a touchscreen device,” Yankee Group’s Howe said. “That is a very small population, because RIM built its brand on a full QWERTY keyboard experience, and this is a device that backs away from that brand positioning.”

Although RIM has said it wants to take on the iPhone, Howe thinks that’s the wrong approach. “RIM aren’t going to win over iPhone customers,” he pointed out. “The big question is whether they’ll capture people upgrading from feature phones. Apple’s brand and advertising will be more persuasive for undecided upgraders, but we’ll know more when the phone actually launches, and consumers vote with their wallets.”