Boycott Apple! Why Apple Is Screwed

Boy, if there were ever an indication that we’re in the post-Steve Jobs years, it was last week when there was a major rally to hold Apple accountable for the poor working conditions at Foxconn in China. Now I’m all for accountability, but this would be like a European country holding a restaurant there accountable for the working conditions on U.S. fishing boats (and there was even a TV show on how bad that job can suck). In fact, this effort might actually make working conditions in these factories worse, simply because companies like Apple will now be more motivated not to report problems outside of their authority.

Sadly, Apple is actually one of the more aggressive companies trying to deal with this problem, particularly under Tim Cook, and the message these efforts send suggests that being aggressive, because it makes issues like this more visible, may in itself be stupid. I’ll get into the dynamics of foreign labor and suggest that boycotting or punishing Apple isn’t the way to fix bad labor practices.

I’ll end with my product of the week: a refresh of an old favorite, the Plantronics Savi Pro, a headset that nicely blends telephone connectivity with PC connectivity so you can live in both the old analog and new digital world with one product.

Years ago, I was an auditor and I got a hard lesson in the realities surrounding procurement. Those realities make it very hard for a vendor to exert effective control over things that extend beyond price and quality. This is because companies, their executives, and their procurement staff are all measured on profitability — or more accurately, the dynamic between what it costs to make something and what it costs to sell it. The closer you get to manufacturing, the more focused on cost you become, and quality is a function of cost. (Returns increase cost, which tends to drive higher quality.)

This means as a procurement manager you bid out a job, and the job is given to whomever can provide the lowest price with adequate performance (performance is made up of both on-time delivery and product quality). These are the primary company metrics — and if the supplier were using slaves who were cycled through as they died but still made its numbers, it would likely be preferred.

Now killing workers is inhumane, which equates to business as a marketing PR problem unless it adversely impacts quality or delivery timing. Which it can, but often doesn’t. Marketing and PR are non-line organizations that are focused on dealing with image, not with changing company manufacturing policy — and they have no authority to do that. Which means the first inclination is cover up the problem, assign blame to someone else, or trivialize it. Marketing/PR has no authority to do anything else.

If a company does implement a more worker-friendly policy with audits, two unfortunate things happen. One is that costs go up to pay for the better facilities or less-abusive vendors, and the audits actually will find problems that will get reported and result in consumer backlash. In fact, several of the problems over the last few years that Apple has been pounded on for, were actually discovered by Apple, which did take action to correct them. In short, the company gets punished two ways if it tries to do the right thing.

A few years ago, a company got pounded as a result of one if its suppliers using children under 18 in assembly, and that practice was discontinued. The company was Apple, if I recall correctly. However, what this did for the community where the factory resided was push the related families into more distress, because often those minors were the only earners in the family — or a critical part of making ends meet. In that country, it was common for employment to begin at 12. In some cases, the kids went unemployed and hungry. In others, they got jobs in even worse environments, because they still needed to eat. In effect, instead of improving living quality in the community, the company’s well-meaning efforts actually made it worse.

What do you think happens when a company like Apple pulls its manufacturing out of a distressed area? You think welfare takes over to pay and feed those people? Granted, other people will get jobs at another company somewhere else, but if the effort was to improve the lot of the people being overworked, all that happened was that one problem, overwork, was replaced with a worse one — starvation or homelessness.

But how often does anyone go back and see what happened to the people who got fired as a result of these more “humanitarian” practices?

The focus of the protests is likely on Apple because it’s the richest U.S. company. However, Foxconn builds for a lot of other companies as well. If you want to fix a problem like this, focus on the behavior, taking an approach similar to the U.S. banning lead paint. Ban all products connected to this behavior, regardless of brand. Put in place government audits, and anyone who wants to ship anything into the U.S. will have to address this issue.

That would raise the bar for every company, and it would become a quality metric — in short, a line problem — and the entire class of suppliers would have to improve labor practices. It would shift from an image issue to one connected to costs and revenues, and — at least with regard to U.S. imports — the labor conditions would have to be improved.

Here in the U.S., we have a tendency to focus on quick fixes that address the image of a problem but ignore the core issues. It’s how we got into the economic mess we are in and likely will be in again. We don’t fix the behavior — we just target a few scapegoats until we don’t see it anymore.

At some point, it might be wiser to actually get the job done. Greece is currently the example of what happens when you just cover things up repeatedly, and that is the path we currently are on. Apparently, it is also one of the reasons ants are kicking our butts. 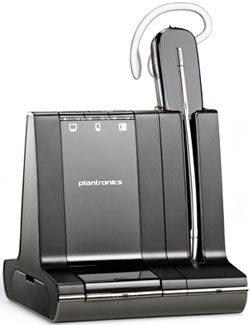 The new Savi W745 has become one of my favorite desktop products. It is a wireless headset that connects to both a phone and a PC so you can seamlessly switch between a phone call and either listening to an Internet video or a Skype call.

I’ve even used it to do Skype interviews for network TV and national news services (the sound is that good).

It has decent battery life and is relatively unobtrusive, and it has a range that extends across most of my floor. This newer version actually listens for PC sounds and automatically activates to pass through audio notifications and alarms I might otherwise miss without speakers (and coworkers often find speakers annoying).

At about US$330 with the optional handset lifter so you can answer and hang up calls remotely, it isn’t cheap (you can find it discounted at Amazon and other sites) — but I live with it day in and day out and don’t know what I’d do without this little marvel. Because I can’t really live without it anymore, the Plantronics Savi W745 is my product of the week.