Code Cracker Turing to Be on 50-Quid Notes 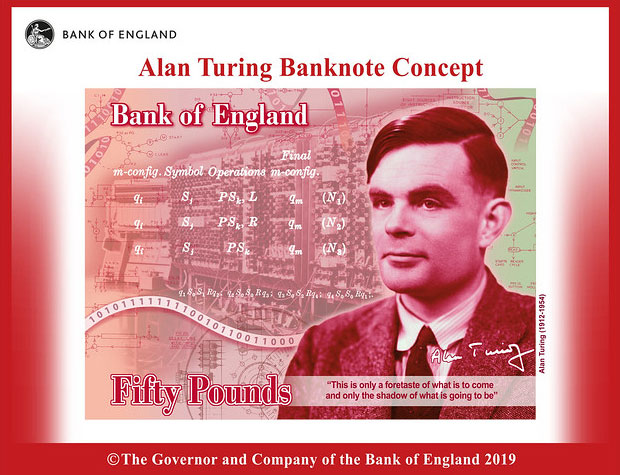 Alan Turing, the British mathematician known for his World War II code-breaking exploits and for a test to distinguish between human and machine intelligence, will be on 50-pound notes in the UK by the end of 2021.

The Bank of England, which made the announcement Monday, explained that Turing, who died in 1954, was chosen from a field of 989 eligible characters after a public nomination period. Other characters included theoretical physicist Stephen Hawking, mathematician Ada Lovelace and Charles Babbage, maker of a mechanical computer.

“Alan Turing was an outstanding mathematician whose work has had an enormous impact on how we live today,” said Mark Carney, governor of the Bank of England. “As the father of computer science and artificial intelligence, as well as war hero, Alan Turing’s contributions were far ranging and path breaking. Turing is a giant on whose shoulders so many now stand.”

The mathmetician is best known for his role in breaking coded messages created by the German military on Enigma machines. The Allies had no problem intercepting coded traffic, but decoding the 159 billion billion encryption schemes available to the machines seemed like an insurmountable problem.

Turing and a team of codebreakers at the now famous Bletchley Park created a machine called a “Bombe,” which effectively broke the German codes.

“What Turing did was help move cryptanalysis into an industrial system,” he told TechNewsWorld.

“Part of the way he did that, with other people, was to build machines that could work to crack Enigma keys at really large scale,” Green explained. “They would blast through all these keys, and as a result of that the Allies had decryptions before the end of every day — sometimes in the middle of the day — of all German communication traffic.”

Turing shortened the war, said Phil Zimmermann, author of the PGP encryption program and an associate professor at the Delft University of Technology in the Netherlands.

In addition to an image of Turing based on a 1951 photo of him taken by Elliott & Fry, which hangs in the National Portrait Gallery in London, the new 50-pound note will contain a number of items related to the mathematician:

Turing gained some notoriety in the area of artificial intelligence as well.

“He posed the question, ‘Can a machine think?’ at a time (1950) when there were no machines that anyone could imagine could think,” Zimmermann noted.

To answer that question, Turing designed what’s come to be known as the “Turing test.”

Modeled as a game, the test asks a panel of humans to interact with unseen parties through a computer chat-type app. Most of parties will be humans, but one will be a machine. If more than 30 percent of the humans fail to identify the machine after “talking” to it for five minutes, then the machine passes the test.

Over the years, scientists have tinkered with Turing’s parameters. For example, inventor Hugh Loebner in 1990 established the “gold standard” in Turing tests. It requires a machine to converse with four judges for 25 minutes. To pass the test, at least half the judges must think the machine is human.

“For decades, the Turing test was looked at as an insightful way of looking at human intelligence, but we’ve come to realize in recent years that the process isn’t as simple as that,” Zimmermann observed. “Machines are getting within striking range of thinking, but they can’t really think like a biological brain thinks.”

Despite his successes, Turing had a turbulent personal life, which has been the subject of a biography, a number of plays in the 1980s, and more recently the 2014 film The Imitation Game, with Turing played by Benedict Cumberbatch.

Turing, a homosexual, lived at a time when homosexuality was illegal in Great Britain. He was arrested and found guilty of gross indecency. Rather than go to prison, he chose an alternative penalty: chemical castration, which involved debilitating hormonal injections.

Two years after his arrest, at the age of 41, Turing died of cyanide poisoning. It was ruled a suicide.

British Prime Minister Gordon Brown apologized for Turing’s treatment by the country’s justice system in 2009, but Turing did not receive a royal pardon for his gross indecency conviction until 2013.

Turing’s Law was passed in 2017, pardoning all gay men convicted under the gross indecency laws.