Come to Silicon Valley, the Drama Capital of the World!

At one time, HP was such a nice, quiet company. It was a relatively steady firm known for loyal employees, solid ethics, and products you could trust but not necessarily get excited about (unless you loved calculators and were part of the pocket protector set). While I think excitement is grand, I’m thinking there are a lot of folks at HP who are wishing for the old days. National scandals, out of control CEOs, and blossoming wars have defined Silicon Valley’s last decade — and if last week is an indicator, this decade will be even more exciting.

I’ve been thinking that this has become so interesting that it would make a good situation comedy or reality TV show (I even wrote a treatment: “The Crazy Rich Old Guys of Silicon Valley”). I think we are seeing a macro trend that suggests a lot of firms may be going just a little nuts at the moment.

I’ll close with the product of the week — from the previous company that was at drama central, Microsoft, which appears to be taking a vacation from drama this week. It has a new mouse out that goes against the belief that it can’t innovate or design cool products: the Arc Touch Mouse.

Over the last 10 years, HP has had a major proxy fight; the removal of the top woman in executive management for not managing (who is now running for the U.S. Senate and may win); multiple public affairs crossing multiple administrations; a national scandal for doing something (pretexting) that was actually legal when it was done; and the removal of a top financial excellence CEO for falsifying financial records. (Do you see an irony trend here?)

It is currently trying to find a new CEO — and hopefully breaking the cycle of firing them. This happened while it was having a mixed tiff with the biggest software company in the world, and while it was bidding into the stratosphere to win 3Par in a war with Dell. I’ve been thinking about who HP’s next CEO should be and wondering if I should add “peace-loving monk” to the list.

Oracle has been dealing with a really ugly acquisition with Sun, and it’s had its own level of drama. A firm that seems to think executive affairs are a measure of success rather than something to be avoided had one mistress actually take out a Times Square Billboard featuring her executive married boyfriend. (Yes, he is an Obama advisor, which just adds that extra slice of sauce during an election year. You can just picture Bill Clinton giving the thumbs up, and then saying “oh crap.”)

Oracle’s scandal prone CEO actually wrote a letter in support of Mark Hurd, which is kind of like having the Catholic church show up in support of a teacher who was fired for having an affair with a student.

In the process, Larry kind of implied that Steve Jobs was having affairs as well, something I’m sure Steve thought was absolutely not brilliant. Oracle then hired this most recently disgraced HP CEO and declared war on HP. Speculation is it’s trying to drive HP’s stock price down so that Larry can buy the firm and reinstate Mark. Only in Silicon Valley, people.

During all of this, Google is being sued by everyone and their brother, starting with Oracle. Granted, the Oracle action seemed to me to be kind of an apology for tossing Jobs under the affair bus in that New York Times letter. But it is also being sued by Paul Allen for screwing him — and taking on two old, pissed billionaires at once is daunting, even if you have several of your own in the company.

Google’s CEO gets up at IFA and basically says “all your base are belong to us,” or more accurately, “we know where you are, we know what you like.”

Evidently, it was just coming out and saying your information belongs to Google and that it knows everything about you, which was really smart given it’s under investigation by a number of governments for getting that information illegally.

Over the last few months, Apple has been blamed for using members of a previously unknown and private-looking Silicon Valley police force as shock troops against a Gizmodo blogger.

It’s been accused of covering up an antenna problem by one of the most powerful members of the U.S. Senate.

It’s been put in the affair bowl by past board member Larry Ellison.

And it just brought out a social networking product called “Ping,” which folks are comparing to poop.

Don’t you kind of wonder if all those reality TV shows like “Jersey Shores” would be vastly better if made here in the Silicon Valley? I think our drama is far deeper. Some of the CEOs here drive around in cars that cost millions and own fighter planes — and are at war with each other, making the airspace over Silicon Valley interesting.

I’m half expecting Ninja attacks, cars with built-in machine guns and rocket launchers, and the announcement of a contest for the Tiger Woods Award for biggest number of illicit affairs, or most pissed-off wife or mistress.

Silicon Valley is clearly where the action is — but I have to admit I’m getting a little overwhelmed, and I’m kind of missing the good old days when we mostly worried about what the USSR was going to drop on us.

Interestingly, the power player who is being positioned as the guy who will bring some sense of balance back to the valley is Mark Andreessen,who apparently is driving the core fix at HP.

What makes this interesting is that a younger Mark Andreessen was largely responsible for the biggest financial wave to ever hit the Silicon Valley — the dot-com wave — and there is the hope that he could cause lightning to strike twice. Then again, given all of the excitement, I’m more than a little worried that this lightning might strike me and not in a good way.

However, if you like excitement, affairs, and crazy old rich guys with fighter planes, come to Silicon Valley! Our new tag line is “Silicon Valley — Where Sanity Is Optional.”

Most of us likely use keyboards and mice more than any other accessory, yet we don’t talk that much about them. I’m a big fan of gaming keyboards and historically have used Logitech products because they were generally better than what Microsoft had.

However, I’m currently typing on a Microsoft X4 gaming keyboard and prefer it, and I just got its new Arc Touch mouse, which will end up in my computer bag with my laptop when I’m done with this column. 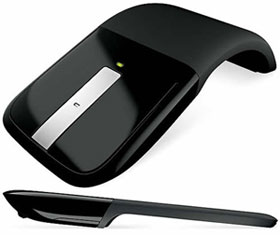 The problem with portable mice is that they tend to either be bulky or not very comfortable to use. The Arc Touch Mouse gets away from that by starting off flat, so it is easy to store — and then you bend it into a curve and it fits your hand like a regular full-sized mouse.

Rather than a wheel, its scrolling function is handled by a touch strip in the middle of the mouse, which has multiple functions. I initially had some issues with this — likely because I have a lot of wireless things on the same frequency in the office — but it seemed to settle down after the mouse was powered on and off a few times.

Overall, I found that in a world defined by Apple products and where we believe Microsoft can’t innovate, an innovative, well-designed mouse from Microsoft was a refreshing change — and that makes the Microsoft Arc Touch Mouse my product of the week.