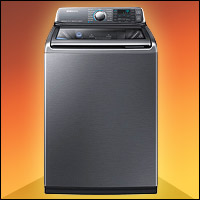 That’s the situation Samsung found itself in last week when the U.S. Consumer Product Safety Commission issued a warning about certain top-load washing machines made by the company between March 2011 and April 2016.

“CPSC is advising consumers to only use the delicate cycle when washing bedding, water-resistant and bulky items,” reads a statement at the commission’s website. “The lower spin speed in the delicate cycle lessens the risk of impact injuries or property damage due to the washing machine becoming dislodged.”

Samsung and the CPSC have been discussing how to address safety issues associated with the washers, Samsung noted in a statement issued last week.

In rare cases, affected units may experience abnormal vibrations that could pose a risk of personal injury or property damage when washing bedding, bulky or water-resistant items, the company explained.

However, it is important to note that Samsung customers have completed hundreds of millions of loads without incident since 2011, it added.

The CPSC warning comes a month after the filing of a class action lawsuit in federal court over problems with the washers, The Washington Post reported.

The lawsuit, filed by three women from Texas, Indiana and Georgia, maintains Samsung has known about the problem with the washers for years but has done little to inform consumers about it.

A vulnerable washing machine may vibrate violently when taxed by a heavy load, the lawsuit points out, which can cause its tub to become unfastened, resulting in a centrifugal explosion that can destroy the machine and anything next to it.

A different brand of washer caused a similar problem for Rob Enderle, principal analyst at the Enderle Group.

“My wife and I had to jump on it to keep it from destroying the laundry room, and it still punched a big hole in a brand new wall,” he told TechNewsWorld.

His washer’s problem was caused by a faulty installation, Enderle explained.

“The installer had failed to remove the securing harness for the harmonic balancer, so the tub was massively out of balance,” he said.

Coming as it does on the heels of the Galaxy Note 7 problems, the washing machine issue likely will do massive damage to the Samsung brand, Enderle maintained.

“It showcases Samsung as a vendor that builds unsafe products, accentuates their historically horrid service and support, and resonates across very different product lines — reflecting more on the parent brand than any one product,” he said.

“This makes it look like Samsung is a brand that should be avoided like the plague,” Enderle continued. “This is the kind of thing that can destroy a vendor.”

“Samsung appears to be following proper procedures in regard to working with consumer safety organizations and alerting customers about the problem,” he told TechNewsWorld. “I doubt this will have a lasting impact on the company’s brand or reputation.”

Samsung last month announced a voluntary recall and exchange program for versions of its Galaxy Note 7 smartphone sold in the United States before Sept. 15.

The devices “can overheat and pose a safety risk,” the company said in a statement.

In an update on the recall posted last week to its China website, Samsung reported more than 1 million consumers around the world were using safe Galaxy Note 7s with batteries not in danger of exploding.

“Currently, the brand new Note 7 products that have been swapped in overseas markets are using identical batteries to those that were supplied and used for the Chinese version,” the update says.

Meanwhile, Southwest Airlines this week evacuated a plane after one of the “safe” phones reportedly began sparking and smoking.

Another “safe” new phone, purchased by a tech worker in China, reportedly burst into flames after being charged overnight.