Cortana Cozies Up to Android Users 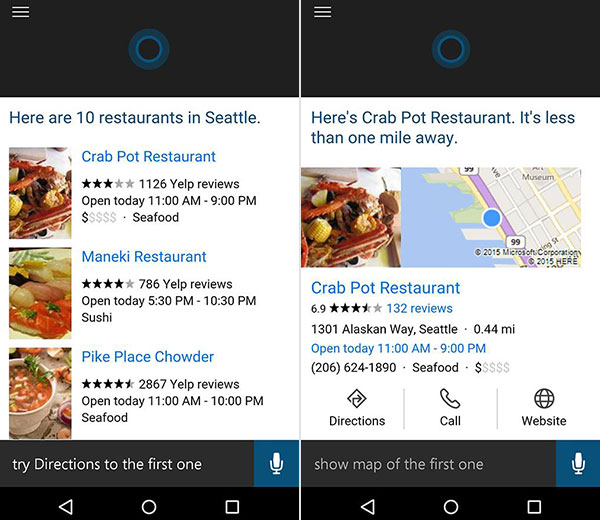 Microsoft on Monday released a public beta of its Cortana personal assistant for Android.

The Cortana app can do most of the things Cortana does on Windows: set and get reminders; search the Web on the go; track information such as flight details; and begin and complete tasks across all a user’s devices.

Cortana will find answers on the Web in response to spoken or typed requests, including things like sports scores, movie times, where to find a particular kind of restaurant, and other factual information. Cortana also supports voice texting.

However, Android device users can’t toggle settings, open apps, or launch Cortana hands-free simply by saying “Hey Cortana,” as they can with Windows.

As is typical with betas, Microsoft is working to improve the Cortana for Android experience and will incorporate user feedback, the company said.

There is already a personal digital assistant available to Android users, of course — Google Now. So how does Microsoft expect to attract converts to Cortana?

“This is a dilemma similar to what [Microsoft faced in] the phone market,” remarked Tuong Nguyen, a principal analyst at Gartner.

“You essentially have a product out that is, at best, the same as what users already currently have,” he told TechNewsWorld, “so, although it’s good that Cortana will be made available across platforms, there’s currently nothing to compel the average user to switch.”

It’s possible that Microsoft is positioning Cortana for Android as a beachhead, since mobile continues to be one of its major business focuses, despite its having written off its mobile handset business, speculated Susan Schreiner, an analyst at C4 Trends.

Further, “this is no different from Microsoft’s usual marketing strategy, releasing betas first,” she told TechNewsWorld.

Making Cortana available for Android and iOS “is the only way Microsoft actually could advance its multiplatform strategy, with its Windows Phone platform holding a market share of under 3 percent,” said Kevin Burden, a research vice president at 451 Research.

“Voice recognition is part of Cortana, that’s how users will interact with it,” he told TechNewsWorld. “It just doesn’t have the wake-up capabilities which require the phone to always be listening.”

Hands-free capabilities will come to Cortana “when the hardware catches up to its requirement to always be listening,” Burden predicted.

Given that Cortana for Android is still in beta and lacks several key features, who would give it a shot? Tech geeks — that’s who.

Twenty-four percent of Germans and 38 percent of Americans reported having used personal assistants on their smartphones in the previous three months, in a Gartner survey conducted in the two countries last year, Nguyen said. “The base of users who would try using Cortana on Android would be a subset of this.”

For Windows users looking for an integrated experience across their devices, an upgrade to Windows 10 with Cortana on their Android or iOS smartphone and tablet “is the beginning of an experience that will continue to improve as more of Microsoft’s services seep into Cortana’s back end,” Burden said.

Ultimately, “it all depends on what developers do with this,” Schreiner pointed out.

Microsoft hasn’t had much luck getting devs to create mobile apps so far, she said, so “this could be Microsoft’s way of testing the market.”