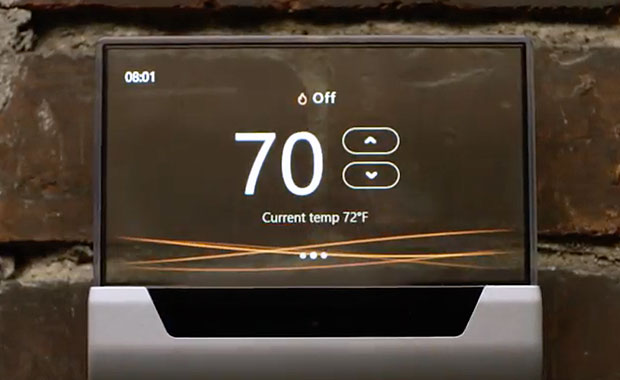 Heating and cooling of a residential home accounts for around 48 percent of energy use, making it the largest energy expense for most families, noted Johnson Controls, a provider of HVAC, fire and security systems, and maker of the first electric room thermostat.

In commercial buildings, heating and cooling accounts for approximately 40 percent of energy costs.

Thermostats that can be controlled remotely via a smartphone or other device generally have been increasing in popularity, but a key plus for Glas is that it is more than a thermostat. It includes sensors that can detect when people are in the room, and adjust the temperature accordingly.

Like competing smart environmental devices, including those from Nest and Hive, the Glas smart thermostat is designed to lower energy costs by maintaining desired temperatures in parts of a building that are used more, while maintaining appropriate temperatures in areas that are infrequently accessed.

Unlike other wall-mounted units, Glas provides continuous monitoring of both indoor and outdoor air quality.

“From the little we know, this looks like a Nest-comparable device,” said Roger Entner, principal analyst at Recon Analytics.

“Smart home thermostats with some value-add is a growing market, especially in states like Massachusetts that subsidize intelligent thermometers,” he told TechNewsWorld.

“The air quality and AI is just a value-add to the dumb thermometer most Americans have in their home that drives their air conditioning and heating,” Entner added.

Voice control could be a distinguishing feature for Glas. Users can tell it the temperature that they want and adjust other settings.

“That sets it apart from Google Nest, which doesn’t support voice directly — though it can be managed vocally with a Google Home device,” he told TechNewsWorld. “Similarly, the Eccobee4 thermostat can be used with Amazon Alexa.”

For Microsoft and Johnson Controls, it is now a question of whether its partnership product is coming to the market too late or is arriving just in time for the smart home revolution.

“Amazon and Google are already in this market. Both have cloud services, smart assistants and AI capabilities,” he told TechNewsWorld.

“Microsoft is a latecomer, but not too late, because the IoT market is just taking off — sort of ‘better late than never,'” Kay added.

The smart thermostat market is still a niche market, however, and may stay that way for a while, due to costs.

“At US$250, a Google Nest is about 10 times the cost of a basic digital, programmable thermostat,” noted Pund-IT’s King. “That’s likely to change as digital assistants, like Google Home and Amazon Alexa become more common and provide voice-enabled equivalents of universal remote controls.”

From the information available so far, it does seem that Glas targets commercial properties more than consumers’ homes.

“That makes sense strategically, since Johnson is known for its HVAC, fire and security systems — but it also underscores some key Glas features, including air quality controls and the ability to sense when people are present in a space and automatically adjust its settings,” said King.

“While those points may interest some consumers, they’d be more valuable to businesses looking to better manage their facilities and related costs,” he explained.

This could be a product that finds itsr market in business settings, but then reaches homes in another version, especially if it should become the central command station in either environment.

“The battle is for the IoT hub in the home, office or other building,” said Endpoint Technologies’ Kay.

“Apple wants in on this, too,” he added. “This is mostly about not being outflanked in an evolving market — really the least tapped market of the big three: endpoints, cloud and IoT.”