Cyberspying: Turning a Weapon Into a Benefit

This story was originally published on June 17, 2013, and is brought to you today as partof ourBestofECT News series.

I’m into fixing problems — in fact, for much of my life I’ve been employed as someone who is brought in to fix a difficult problem. I don’t see much point in just complaining — either try to fix it, ignore it, or move someplace where it doesn’t affect you. (I’m also planning to move to Belize.) The current problem is that the U.S. appears to be conducting a cyberwar against its citizens.

The latest revelations are that U.S. intelligence organizations are actively monitoring our calls and the U.S. government is building a massive data mining facility that should be able to mine our call content. In a few very short years, the U.S. government will know about our affairs, our use of unapproved substances, when we speed, whether we have friends who are criminals, spies or terrorists, and not only when we break laws we mostly didn’t know existed, but also whether we are likely to.

Given that members of both parties in Congress apparently haven’t read or don’t understand the Constitution, I find this particularly scary. If I were a politician doing this, I’d want gun control too, because really pissed-off armed citizens create an impressive revolution problem. However, were I a politician, I’d also start wondering how many questionable meetings with lobbyists, pages, and wives of other folks were being captured and eventually used to get me to support a bill or action I didn’t believe in — like oh, an even more invasive program of spying on my constituents and family.

I think these last two things have a lot to do with why Congress is a bit upset, but I worry that its fix may only take elected officials with enough power off the watch list and leave the rest of us on it. I’ll focus on the U.S. government’s war on U.S. citizens — and how to fix it — this week, and I’ll close with my product/company of the week: BlackBerry, which makes the only smartphone currently designed to defend, at least partially, against unauthorized monitoring of our personal information.

Right now our jails are so full of people, those in charge are having to figure out ways to let criminals go home early in order to free up space for others. If we move to a time — as we appear to be doing — when even more folks who are committing minor crimes are caught through surveillance, we won’t have any place to put them.

The systems that are being put in place could be used to warn us that what we are thinking of doing isn’t a good idea and, particularly with kids, warn parents when their little darlings are on a path to doing something that will destroy their lives and convert their college funds and their parents’ retirement funds into legal fees.

In addition, the system could warn homeowners when criminals are discovered researching their homes and allow them to prepare to defend it by giving them alert notices. For instance, one of the growing trends is for criminals to look at obituaries to find out when funerals are so they can burglarize the homes of relatives attending the service.

The capability that the government is creating could not only alert these already-traumatized people to a possible problem, but also correlate individuals with criminal records with specific activities targeting the home. The system the government is implementing knows who everyone is and is very good at connecting the dots. In fact, in many cases, it could also alert law enforcement so there would be a police presence at the home when the criminals showed up to burglarize it. This is kind of like the program Person of Interest but at scale.

Now let’s say you have a child going through that exploration of what is legal and what isn’t. This system could alert the parents to behavior that could end badly for the child and others. Kids have issues associated with using controlled substances and using poor judgment. YouTube generally lives off videos of kids doing things that could get them maimed, killed or tossed in jail. Kids seldom start with doing the big thing that will destroy their lives. Instead, they start with a pattern of first riding with people or hanging with people behaving badly and then move to that bad behavior over time as they emulate the group.

Parents notified in a timely way could take away their kids’ cars, ground them, put them into counseling, get them into one of those “scared straight” programs, or just take them on a tour of a jail — something I got to do as a child — which could save their lives. Kids generally don’t understand consequences, and if these consequences can be made real to them before they make a mistake, they are not only safer, but also don’t end up in jails that don’t have the room to house them, and they don’t chew up family resources to keep them alive or out of jail.

Finally, we’ve had a number of massacres and suicides by children. The patterns that led to those events have been evident after the fact, but a system like this could make more of them evident before. Rather than focusing on stupid ideas like gun control, which unsuccessfully tries to remove the tool, this system could focus on eliminating the cause. I think this is a better path, because there are a lot of ways to kill people besides with guns, but if you can stop folks from wanting to do it in the first place, then you have a better chance to prevent a tragedy.

In short, what I’m proposing is that rather than using this information to put more people in jail, officials could use it to prevent crimes, to prevent life-ending and life-destroying events, and actually to make people safer and happier.

A big problem with collecting this kind of data is that it can be misused for blackmail or to violate the privacy of individuals. You may remember that several Google engineers who had similar access to Google’s resources were using that access to stalk some young vulnerable women.

Power corrupts, and bad people can get into jobs where they have unusual power. The kind of power that the people collecting this information will have will be unprecedented, and they could use it to control politicians, protect criminals, and to sexually assault vulnerable children and adults. “We won’t tell your parents/husband/wife/fiance if you. . . ”

As a result, there needs to be significant oversight to make sure that this huge power isn’t misused, and this oversight is currently missing.

I don’t think we can reasonably stop efforts to monitor us. If our government doesn’t do it, other governments, companies like Google, and criminal organizations will.

The best we can do is to make sure that this information is primarily used to help us rather than to build evidence against us to put us in jail. We can also push for enough oversight so that the tool doesn’t become a weapon against our own safety and happiness.

I’m very worried that neither will be the case and the result would make living in the US excessively dangerous.

Product of the Week: BlackBerry

I know I just had BlackBerry in this spot a couple of months ago — but given my concerns surrounding all of this monitoring, I wanted to pick a product that could provide some protection. 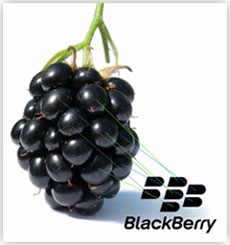 BlackBerry is located in Canada, which unlike China and the U.S., doesn’t appear to be trying to spy on its people. Apparently Canadians are just too nice to do that. Unlike China, their government isn’t afraid of its people, and unlike the U.S. there aren’t a ton of folks who want to kill Canadians. That makes it a much better place to have a phone platform if you are concerned about security.

If there is anyone who knows about security, it is the DoD, and the DoD blesses the BlackBerry. As a result, in this time of no privacy, the most-private phone is the BlackBerry, making it my product — actually, company — of the week.