Dawning of the Age of Quantum Information Teleportation

This story was originally published on Aug. 19, 2013, and is brought to you today as part of our Best of ECT News series.

Researchers at ETH Zurich, a university of science and technology, have teleported information from one end of a superconducting circuit to another — a distance of 6mm. 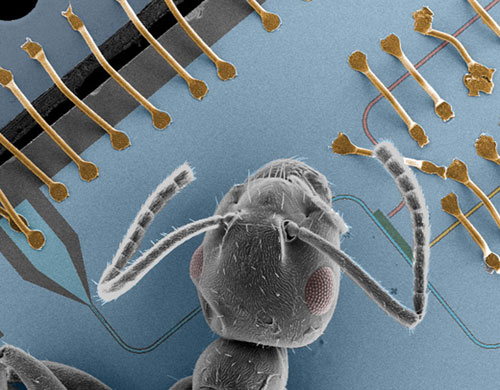 The ant depicted on top of the superconducting circuit illustrates the relative proportions of the macroscopic electrical circuits for the first time used for teleportation. (Credit: Jonas Mlynek/ETH Zurich)

The experiment has two unusual features: 1) It is the first time quantum teleportation was conducted over a circuit without the use of a powerful laser beam; and 2) the information was relayed making use of the laws of quantum physics rather than classical physics.

This achievement is “extraordinarily impressive,” remarked Carl Williams, chief of the quantum measurement division of the United States National Institute of Standards and Technology.

The researchers created two small superconducting circuits on a chip measuring 7mm square. They cooled the chip to very close to absolute zero using helium in order to access the system’s quantum properties.

The researchers then created quantum entanglement between the superconducting circuits.

Quantum entanglement results when particles such as photons or electrons interact physically and then become separated but remain in the same quantum state. A quantum state is a set of mathematical variables, including position, momentum and spin, that fully describes a quantum system.

Once the circuits were in an entangled state, information programmed into the sending circuit vanished, to reappear in the receiving circuit when it was read out. The information did not travel from one circuit to the other, said Andreas Wallraff, who headed the study. Think of Star Trek’s transporters beaming people up to the mother ship or out of the vessel.

If the concept of spooky entanglement sounds puzzling, rest assured it is: Albert Einstein derided it as “spooky action.”

Other teleportation experiments have moved information over far greater distances. For example, scientists in China transmitted quantum bits, or qubits, over a distance of 97 km, or roughly 60 miles, and European scientists moved information x143 km, or 89 miles, between the Canary Islands of La Palma and Tenerife. Both experiments were conducted last year.

However, both of those experiments used beams of light from lasers to encode qubits, which are quantum bits.

Although the ETH experiment teleported data over only 6mm, it is “a truly impressive experiment using superconducting electronic circuits, a couple of Josephson junctions, and a planar array,” NIST’s Williams said. The Institute first demonstrated quantum teleportation back in 2004 and has a US$20 million budget for quantum research.

Quantum technology “is futuristic,” observed Williams, “and we are beginning to see some of the first small spinoffs.”