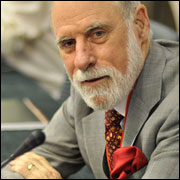 A “Digital Dark Age” could be looming, warned Vint Cerf, vice president and chief Internet evangelist for Google. His warning came this week at the annual meeting of the American Association for the Advancement of Science conference in San Jose.

Cerf, who was a manger at for the United States’ Defense Advanced ResearchProjects Agency (DARPA) and funded groups that developed TCP/IPtechnology and has been recognized as a “Father of the Internet,”warned that as technology advances there is a risk of losing access todata on older technology.

“Old formats that contain documents, photos and other data may not bereadable with the latest version of the software,” Cerf said, adding thatbackwards compatibility is not guaranteed, and over time there couldbe vast archives of digital content that simply can’t be accessed.

“It has made it easier for people to share and store data, but it isabsolutely a problem if you don’t have the hardware to access it,”Schreiner told TechNewsWorld.

New Take on an Old Concern

While Cerf suggested that this is a growing issue, notably with theadoption of more and more devices with ever-improved operatingsystems, the concern over data being left behind is not entirely new.

“An interesting thing about Cerf’s comments is that they spotlight anissue that’s been a subject of concern for at least two decades,usually due to the inaccessibility of some important document oranother,” said Charles King, principal analyst at Pund-IT.

“Those issues typically spark individual recovery efforts but nothinglike a concerted, industry-wide strategy or project to address theproblem,” King told TechNewsWorld. “Around 2005, a number of folksbegan proposing that critical historical data and archives be postedonline, and that’s generally where things have headed since then.

“But that doesn’t address the central point — that the IT marketplacehas locked consumers and businesses into an ‘eternal upgrade cycle’where new technologies are launched, mature, fail to keep up with newdevelopments and are eventually superseded by next generationtechnologies,” King added.

The problem remains that as systems are updated old programs don’trun, but this is a problem that has existed for years.

“My first computer was an Atari,” added Schreiner.

“I have a box of old Atari disks with articles on it, but no way toaccess it,” she noted. “You really have to keep the old hardwarearound and if you don’t have it there is no way to access the old data.”

Even if the hardware is available, it doesn’t necessarily provide a way to ensure that the data can be moved to more modern hardware.

“There is no elegant solution, no sophisticated solution when you’retalking about the older digital files,” Schreiner explained. “There isa shortness associated with digital memory that is catching people off-guard.

“People who only have done digital photography find out the hard way;one computer crash and it is all gone,” she stressed.

“The changing formats of data are frustrating for many, just askanyone who went from albums, to CDs, to digital formats,” added JimMcGregor, principal analyst at Tirias Research.

“Unfortunately, digital formats continue to change,” McGregor toldTechNewsWorld. “However, as more information moves to the cloud,converting these formats will likely become easier because it can bedone by the servers and as a service to the user.”

Concerns About the Cloud

The issue is whether the cloud is the perfect solution in itself.

“You can lose access for periods or time, you could lose data if it isnot properly backed up or a disaster occurs, and it is more prone tosecurity intrusion attacks,” said McGregor.

The security concerns could also outweigh those of lost data.

“It strikes me as ironic that on the one hand people worry aboutsecurity, privacy and having too much of their personal informationout there on the Web, and on the other hand there’s this gradual decayof available information,” explained Dr. Joost van Dreunen, cofounderof Super Data Research.

Cerf suggested that an X-ray snapshot of the content, its application, andmost importantly the operating system, could be one way to ensure thatfuture generations are able to reproduce the technology to retrieve saiddata.

There may be two problems with this solution however. One is that the X-ray would have to be preserved — and that likely should not bedigitally. The other issue is that it might involve a corporateentity to maintain the X-ray, which brings the entire problem fullcircle.

“If your vendor of choice goes broke, you’re usually completely out ofluck, but even successful vendors can be less than helpful when itcomes to supporting out-of-date devices and data,” noted King.

“Frankly, I don’t see a way out of this quandary absent some sort ofvoluntary agreement or industry regulations,” King added. “In thecurrent business climate and absent serious vocal demands by ITcustomers, neither of those outcomes seems likely.”

The data mining of tomorrow might not be looking for personalinformation or usage patterns by users, but rather could be literallya type of digital recovery of lost data.

“In 50 years from now there will no doubt be Internet archeologistsdata mining old information and using archaic software applications touncover its stories,” van Dreunen told TechNewsWorld. “One day theInternet may be largely useless, inaccessible information.

“What will prove to be the most important skill above all, I think, isfiguring out how to navigate this data wasteland,” van Dreunen added.

For now the best option might be to do what data storage expertssuggest, back up the data and ensure it isn’t just left behind asplatforms evolve.

“The old adage is the best; use multiple sources to backup your dataand do it frequently,” said McGregor. “Cloud resources and serviceswill be a key resource for all consumers going forward, but it isstill best to have local storage as well if the information is deemedcritical.

“On another note, I wouldn’t paint such a dire picture,” McGregorsuggested. “Things change over time and network enhancements, cloudservices and connectivity continue to improve the capabilities andreliability of technology.”