Distant Planet May Have the Right Stuff

Planet Gliese 581g, the so-called Goldilocks planet whose discovery was announced earlier this week, may help prove Earth is not the only habitable planet in the universe. 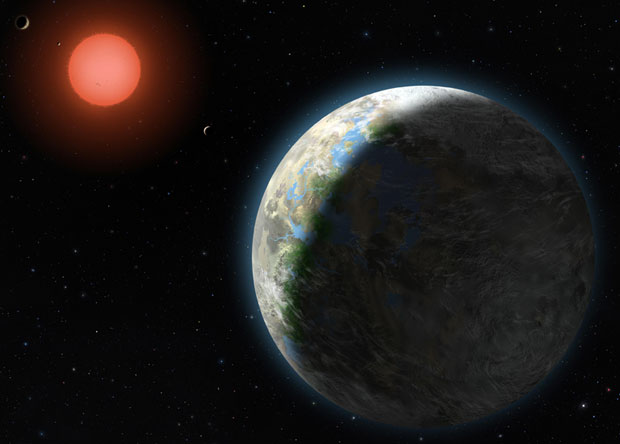 One reason for that is because it was so readily discovered — scientists found it after looking at only nine nearby stars.

“Planets in the habitable zone seem to be amazingly common based on the fact that we found this one in such a short period of time,” Gillian Wilson, an associate professor in the department of physics and astronomy at the University of California Riverside, told TechNewsWorld.

Goldilocks planets are those at the right distance from their suns to potentially allow life to develop. They’re not too hot or too cold — they’re just right.

This planet is one of six orbiting Gliese 581, a red dwarf star of the spectral type M3V. It’s 20.3 light years from Earth in the constellation Libra.

A red dwarf star is a small and relatively cool star of the main sequence, of either late K or M spectral type as classified by a Hertzsprung-Russell diagram. Red dwarf stars have a mass of about 40 percent that of our sun, and a surface temperature of less than 4,000 degrees Kelvin. For reference, zero degrees Kelvin equals -273.15 degrees Celsius.

The main sequence is a continuous band of stars that appear on plots of the stars using brightness, or magnitude, for the Y axis, and color for the X axis. Plots like this are named Hertzsprung-Russell diagrams after their developers, Ejnar Hertzsprung and Henry Norris Russell.

Stars are allocated to spectral classes based on the ionization of their chromospheres and what atomic excitations are most prominent in the light they give off. Basically, the light stars give off is analyzed in order to allocate the stars to a class. There are seven major spectral classes — O, B, A, F, G, K and M, in descending order from the hottest to the coolest.

M-class stars are considered red by convention, even though their actual colors may not match those descriptions. They account for about 76 percent of the main sequence stars in our part of the universe. Most are red dwarfs, although there are some supergiants such as Antares and Betelgeuse. M stars usually don’t have hydrogen, but have all neutral metals. They can have a lot of titanium oxide. Late M stars have vanadium oxide.

Gliese 581g is a so-called Goldilocks planet. It has a near-circular orbit in the middle of its sun’s habitable zone. Its mass is estimated at three to four times that of Earth and it has an orbit of about 37 days. The planet is tidally locked, always presenting one face to the sun.

The fact that the planet is tidally locked and that its sun is a red dwarf suggest the Gliese system is very much older than ours.

Whether or not it may actually have life is a question its discoverers disagree on. Steven S. Vogt, one of the two coauthors of the study describing Gliese 581g, contends there’s life on the planet.

Both he and his collaborator, Paul Butler, believe there’s water on Gliese 581g.

Have Space Suit, Will Travel

Since Gliese 581 has been around for so long, how is it the planet doesn’t seem to have any signs of life? Surely by now an old civilization might be expected to study the stars and send out signals like we do, if it isn’t going to explore the stars.

Those arguments assume life may develop along parallel lines to that on Earth — but what if life on Gliese 581g consists of, say, extremely intelligent rocks that don’t care about space exploration or contacting other species elsewhere? There’s no reason life on Gliese 581g should even come close to developing the way life on Earth has.

“If the planet has any sort of an atmosphere, then it’s not going to be either super-hot or super-cold,” Frank Timmes, an astrophysicist at Arizona State University, speculated.

“And you could possibly develop life around the parts where it’s not completely light or completely dark. You may not develop life over the whole planet,” Timmes told TechNewsWorld.

However, that life may not necessarily be carbon-based or breathe oxygen like Earth’s life forms do.

“We don’t know its composition yet,” Timmes pointed out.

More Life in the Universe?

Vogt and Butler reportedly contend that the speed and ease with which they discovered Gliese 581g indicates life is more widespread in the universe than previously thought.

“We know there are about 200 billion stars in the Milky Way, which is our galaxy, and the team that discovered 581g are estimating one in five stars could have a Goldilocks planet — which means there are 40 billion stars in our galaxy that might have life,” UC Riverside’s Williams explained.

“The most interesting thing I take away from the report is how common these planets might be,” she added.