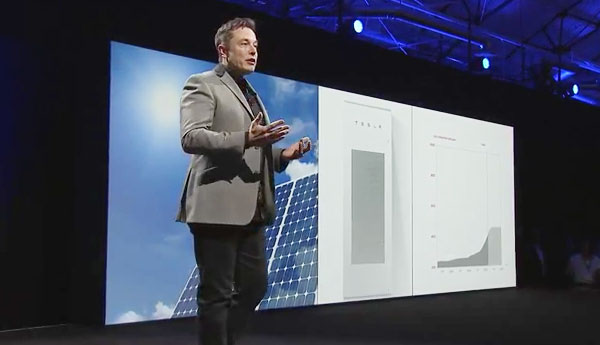 These systems are being developed to work in conjunction with solarpanels to store energy for use at a later time. They also can drawpower from the grid when demand for electricity is low and discharge itduring the more expensive rate periods, when demand is higher.

Musk, who demonstrated the technology to a crowd atTesla’s design center outside Los Angeles, suggested it could substantially reduce energy dependence on fossil fuels and benefit people who live off the grid.

The Powerwall will be available as a 10kWh system that is optimizedfor backup applications, as well as a 7kWh solution for dailyapplications. Both can be connected to solar panels or to the grid,and both can provide backup power.

When paired with the solar poweroptions, the 7kWh Powerwall can be used in daily cycling to extendthe environmental and cost benefits of solar into the evening hours.

These rechargeable lithium-ion battery packs, which can be mounted to ahome garage wall, can provide power when there is a fluctuation in theelectrical grid.

The Powerwall, which was derived from the batterytechnology inside the Model S electric cars developed by Tesla Motors,will be available later this year for around US$3,500. Up to ninebattery packs can be connected together to provide greaterstorage capacity.

Tesla already has announced several partnerships in a number of categories, including SolarEdge and Green Mountain Power in residential/small commercial; Target, Amazon and EnerNOC in large commercial; and AdvancedMicrogrid Solutions, Southern California Edison/SoCore Energy and AES in utility-scale.

The batteries’ benefits are three-fold:They can provide load shifting of chargingduring low rate periods; store surplus solar power; andprovide back-up power in the event of an outage. This combination ofselling points could be an advantage over other systems that addressonly limited problems or provide limited benefits.

“Utility costs are going up, so we are in the beginning of a responsestage where there are smart meters that charge more for peak usage, sothis could provide some relief when there is peak demand,” said VishalSapru, energy and environment research manager at Frost & Sullivan.

“During off peak times, consumers could go back to the grid,” he toldTechNewsWorld.

“It could also be a benefit in regions where there are power outagesand could provide that backup power,” Sapru added. “It could be a lightat the end of the tunnel for residents that face regular storms orextreme winters that impact the grid.”

The upfront cost of the batteries could prove to be a game changer.

“Price tags of $3,000 for 7kWh — daily cycling application — and$3,500 for 10kWh — backup application — DC (direct current) batterypacks came in slightly lower than what the world has come to expect ofan expensive electric vehicle manufacturer,” he toldTechNewsWorld.

“Powerwall has the potential to be a profoundly disruptive technology,and if it takes off, could play a role in reshaping energy policy hereand abroad,” suggested Frederick Lane, author of several books on emerging technologies.

Despite the benefits that the Powerwall could provide,Tesla likely will face some short-term hurdles and challenges.

One of the biggest could be “ramping manufacturing up to scale to haveany discernible impact,” Lane told TechNewsWorld.

“There are a lot of homes and buildings in the U.S., and it will takeyears to equip them with this technology,” he pointed out.

“A second hurdle is the learning curve for consumers. What will they need to know inorder to install this and make it an efficient part of their energy use?” Lane pondered.

“Third, can Tesla — and other companies — get the cost-per-unit downto a reasonable level, so that the payback, if any, is not too drawn out?”

Another issue for Tesla could be addressing privacy concerns. Thecompany noted that it could monitor the battery packs remotely, butexactly what that means is unclear.

“Collecting and analyzing consumer data is obviously critical toeffective planning, but I’d like to know more about what will begathered and how it will be used,” Lane said.

The final problem likely would be consumer adoption. While the systemhas many laudable benefits, it will take a good marketingplanning to pique consumer interest.

“Early adoption is going to be a challenge,” said Sapru. “In any givenscenario, you have people who are interested in new technology, but thequestion is whether the number is in millions or just in thethousands.”