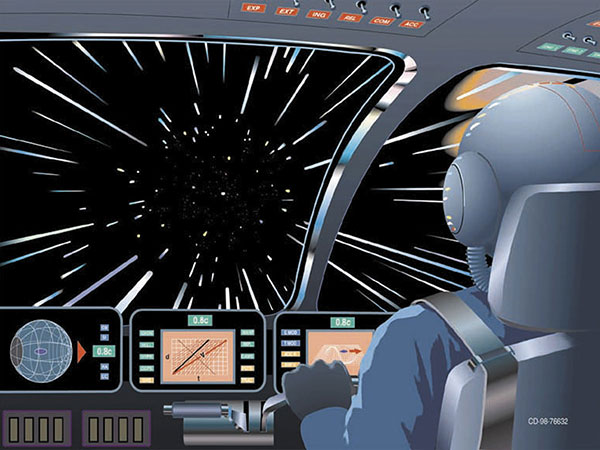 Star Trek fans have been murmuring excitedly about the possibility of an actual “warp drive” — that is, faster-than-light, mode of travel.

NASA earlier this year attempted to burst that bubble, saying in no uncertain terms that light-speed travel was simply imaginary… “at present.” That qualifier, at present, was enough to fuel another round of speculation.

Lost in the chatter over a potential warp drive was the very real experimentation NASA and others have been undertaking to develop a way to radically speed up spaceflight. It may not be warp drive, but electro-magnetic drive, aka “EM drive,” is perhaps even more exciting, because it has a better chance of being science fact than fiction.

EM drive technology theoretically could allow a trip to the moon in four hours, to Mars in 70 days, and to Alpha Centaurii, the star system nearest to our own, in roughly 130 years. If that sounds like a long time to be hurtling through space, compare it to the thousands of years it would take to make a similar mission using current space travel technologies.

Such drives use electromagnetic microwave cavities to convert electrical energy to thrust without having to expel any propellant.

Electromagnetic cavities act as containers for electromagnetic fields such as photons, containing their wave function. The size of the cavity determines the maximum photon wavelength that can be trapped.

Researchers at China’s Northwestern Polytechnical University in 2010 claimed to have built an EM drive based on SPR’s design but with more power input. Their work is ongoing.

Some scientists remain skeptical that a working EM drive can be engineered, because the technology would contradict the rule of the law of conservation of momentum by not needing a propellant.

Eagleworks Lab published a research paper in 2014 on experiments it conducted with an EM drive that reportedly created a directional thrust in accordance with SPR’s experiments and claims.

None of those tests were conducted in a hard vacuum, however, which would help prove the propulsion was created internally rather than caused by thermal convection.

Paul March, a researcher at NASA’s Eagleworks Laboratories, earlier this year announced on a NASASpaceFlight.com forum that an EM drive was tested in a hard vacuum and created a propulsive force, a highly encouraging development.

However, measurements are scanty and need improvement. The radio frequency power amplifiers, which were made for hard vacuum, fail rapidly due to internal corona discharges and there aren’t enough funds to replace or upgrade them.

NASA’s Glenn Research Center reportedly has offered to replicate the experiment in a hard vacuum when Eagleworks achieves a particular threshold of thrust.

The EM Drive Developments discussion thread on NASASpaceFlight.com so far has drawn close to 780,000 views.

Eagleworks Lab head Harold White apparently hypothesized that the thrust from the EM drive Eagleworks built last year was due to the quantum vacuum behaving like propellant ions do in a magnetohydrodynamics drive.

The virtual particles of the quantum vacuum replace the propellant ions of the magnetohydrodynamics drive, White argued, which would eliminate the need to carry propellant.

Some members of the scientific community remain skeptical because the quantum vacuum can’t be ionized, and is understood to be frameless, meaning you can’t push against it to generate a repelling force to get momentum.

Further, the amount of energy it would take to create those particles and thrust against them “would be enormous,” said Marc Millis, cofounder of the Tau Zero Foundation.

“You would have to be able to predict what energy would produce what effects, which is a level of sophistication that has not yet been attained,” he told TechNewsWorld.

“I believe that hard-science experimentation and innovation in the field of EM, of nuclear rocket propulsion, of propulsion systems based on ‘cracking the vacuum,’ will lead to the creation of launch vehicles that will enable interplanetary flight in attractively short timeframes,” said Randa Milliron, CEO of Interorbital Systems (IoS).

Doing away with propellant would cut the cost of launches.

It also would generate significant savings for low-Earth orbit stations, because fuel resupply missions would be reduced, and visiting vehicles wouldn’t need to re-boost, lessening the stress on the station’s structure and prolonging its useful life, said Jim McGregor, principal analyst at Tirias Research.

IoS next year will attach the system to a CubeSat and launch it into a rapidly decaying orbit to test it.

Obstacles in the Path

The biggest challenge is verifying the technology, McGregor told TechNewsWorld.

Further, government backing and broad public interest are crucial, he pointed out, as these efforts otherwise “will take more time than most are predicting.”

A NASA spokesperson was not immediately available to provide further details.