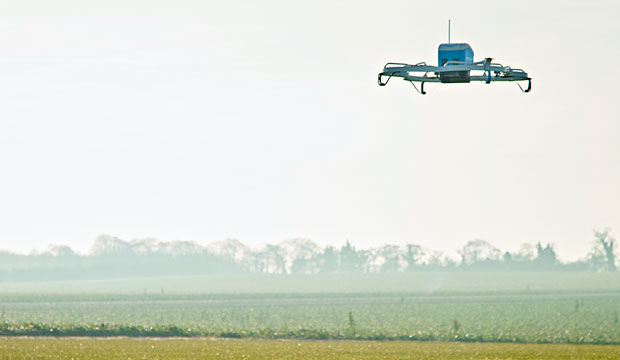 Amazon has cleared a key government hurdle in its flight path to deliver packages by airborne drones.

“The Part 135 certificate means that the FAA has investigated Amazon’s technology and program and determined that it complies with the agency’s safety and operations guidelines,” explained Charles King, the principal analyst atPund-IT.

“Awarding Amazon the certificate brings the company a step closer to drone delivery,” he told TechNewsWorld.

“This certification is an important step forward for Prime Air and indicates the FAA’s confidence in Amazon’s operating and safety procedures for an autonomous drone delivery service that will one day deliver packages to our customers around the world,” he said.

Drone deliveries can benefit both Amazon and consumers.

“The company’s goal is to offer reduced delivery times on certain items, with packages arriving in 30 to 60 minutes after the order is placed,” King said. “That should offer Amazon a competitive advantage in some markets and scenarios.”

“It is potentially both a lower cost and faster last-mile delivery system, keeping people shopping at Amazon and reducing the immediate need that might otherwise push them to a local store,” added Rob Enderle, president and principal analyst at the Enderle Group.

Not only will drone delivery give consumers near-instant gratification, King noted, but it can be used to deliver emergency supplies, such as medical prescriptions, when immediacy is critical.

It can deliver them in a safer way, too.

“The plan is only to deliver when people are there to receive the package,” Enderle told TechNewsWorld.

In addition, he continued, the drone can deliver to more challenging to reach places like a secured yard or rooftop balcony.

“I expect we’ll eventually start to modify houses with landing pads for drone deliveries on top,” he predicted.

“Since the drone is capable of delivering where you are,” he said, “the risk from porch pirates and the related cost to the consumer and Amazon are significantly reduced.”

The FAA’s action is not only significant to Amazon but to the delivery industry as a whole, maintained Enderle.

“It showcases a clear path and progress to widespread drone delivery,” he told TechNewsWorld.

The Amazon approval follows similar actions given to Google and UPS. “Those approvals collectively showcase that we not only will have drone deliveries relatively quickly, but that there will almost immediately be both competition and oversight to assure low prices and higher safety,” Enderle remarked.

Alphabet’s Wing, which is owned by the same parent company as Google, gained Part 135 approval in April 2019. Since then, Wing, with partners Walgreens and FedEx, has been making drone deliveries in Northern Virginia. It has also gained approval from the Australian government to make drone deliveries in Canberra.

UPS Flight Forward acquired its Part 135 approval in October 2019. It immediately launched a drone delivery at the WakeMed hospital campus in Raleigh, N.C. Drone delivery is needed in healthcare operations, where the shortest time in transit can improve efficiency and help healthcare professionals serve their patients better, the company said in a statement.

A Drone With AI

Drone delivery, at least initially, will face some limitations. Their range is limited to six to eight miles. Wind, cold and heat can affect their performance. Then there are obstacles — high buildings and power lines.

“They can also be attacked by birds, which see them as threats or sometimes prey,” Enderle observed.

“Crime rates will also affect where drone delivery is offered,” he added.

Amazon’s latest drone, the MK27, takes on some of those challenges head on. For example, it uses artificial intelligence to determine what to do when confronted with an obstacle. If it can’t evade it, the drone will either delay delivery of its payload or abort the mission altogether.

Most drones depend on a human pilot to make those kinds of decisions, but Amazon’s MK27 uses proprietary computer vision and machine learning algorithms to navigate the obstacles it may encounter when making a delivery.

The MK27 has another neat feature. It lands and takes off like a helicopter, but when in the air, it can fly like a plane for faster speed.

Infrastructure and manpower will also be challenges for the first drone fleets.

“You need drone-enabled depots,” Enderle said. “Then you need coordination between drone service providers, enough drones to handle the workload and trained drone operators to manage the fleet.”

There could be problems with consumer acceptance, too.

“It’s also unclear how consumers will respond to the service,” King observed.

“While many are certain to be interested or enthused about the service, there will likely be others who are irritated or angered when autonomous drones fly by their homes,” he said.

By the end of the year, it’s expected the FAA will finalize regulations that will be the framework for flying drones over crowds, which will be important to anyone wanting to make deliveries with drones.

That framework is expected to include rules requiring all but the smallest drones to broadcast their identities and locations, a measure aimed at thwarting terrorists and preventing midair collisions.

More regulations governing autonomous flights are also expected as well as standards for the drones themselves, such as what their acceptable level of noise should be.

In addition, the FAA needs to develop a new air-traffic system to manage low-altitude drones and keep the skies from becoming a 3D billiard table.

When all the problems are ironed out, however, drone delivery should be arriving relatively soon. “We could have several areas spun up by the end of 2021, but the pandemic is harming execution in many markets,” Enderle observed. “I’d expect drone delivery to be relatively common in dense rural areas in many parts of the country before 2026.”